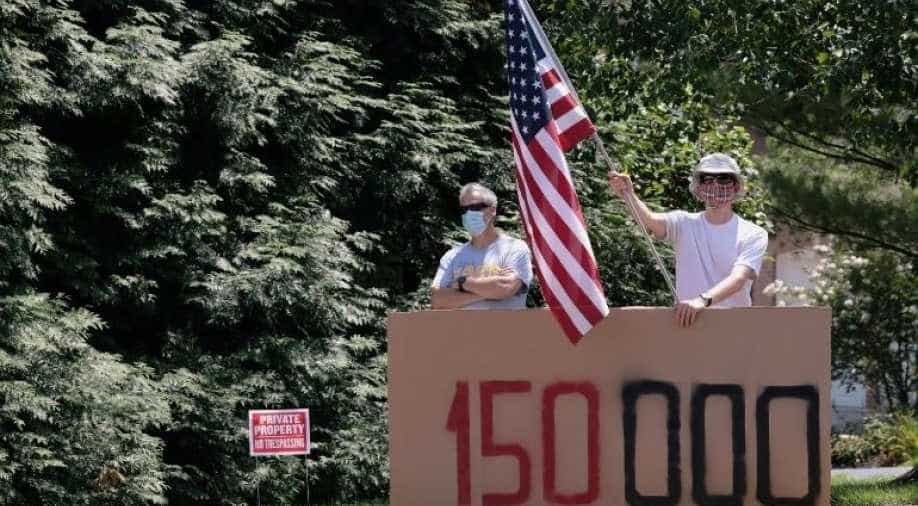 A man holds a U.S. flag and a sign reading "150 000" to represent the number of victims of the coronavirus disease (COVID-19) in the U.S., while U.S. President Donal Trump plays golf at Trump National Golf Club, in Sterling, Virginia, U.S., August 2, 2020 Photograph:( Reuters )

Last week's death toll was 36% higher than the previous week

US deaths from COVID-19 rose for a fourth week in a row to more than 8,500 people in the seven days ended Aug. 2, while the number of new cases fell for a second straight week, a Reuters analysis found.

Last week's death toll was 36% higher than the previous week, though deaths are a lagging indicator and can continue to rise weeks after new infections drop.

The number of new COVID-19 cases reported last week fell 5% from the previous week to about 435,000, according to the Reuters tally of state and county reports. California, Florida and Texas collectively accounted for nearly 180,000 of the new cases, though new infections were lower in all three states compared to the previous week.

Also read: Trump says US should get a 'substantial portion' of TikTok sales

Testing for COVID-19 fell by 6% in the United States last week, the first decline since late May, according to data from The COVID Tracking Project, a volunteer-run effort to track the outbreak.

Nationally, 8.2% of tests came back positive for the novel coronavirus, still higher than the 5% level that the World Health Organization considers concerning because it suggests there are more cases in the community that have not yet been uncovered.

Thirty-one states had positivity test rates above 5%, according to the analysis, including Alabama at 22%, Mississippi at 21%, and Florida and Kansas at 19%.