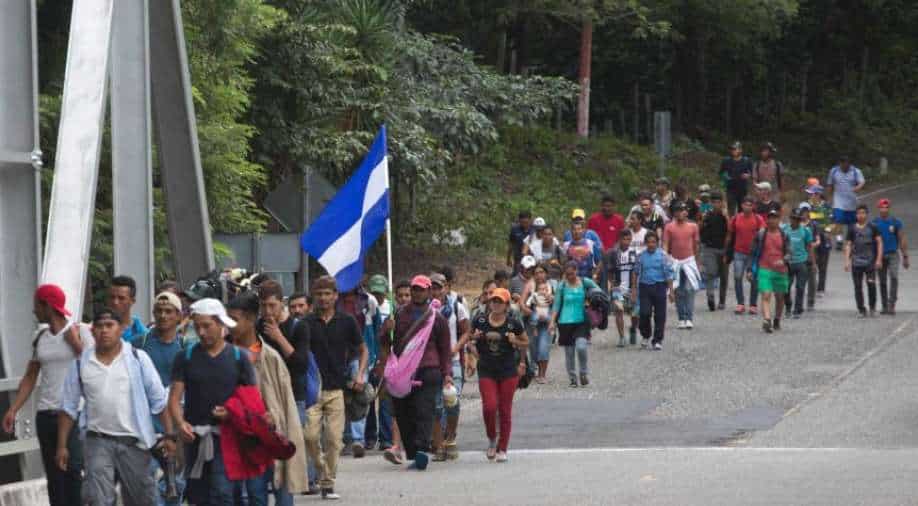 The caravan, including many families with children, walked together across Guatemala on Saturday hoping to reach the United States, seeking to escape poverty, unemployment, gang and drug violence and the aftermath of two devastating hurricane.

Over 8,000 Honduran migrants have entered Guatemala after a first group pushed past border police late Friday and others soon followed on the first step of a journey north they hope will take them to the United States.

The caravan, including many families with children, walked together across Guatemala on Saturday hoping to reach the United States, seeking to escape poverty, unemployment, gang and drug violence and the aftermath of two devastating hurricanes.

The first migrant caravan of the year comes less than a week before US President-elect Joe Biden takes office. He has promised a more humane approach to migration, in contrast to outgoing President Donald Trump's hardline policies.

Biden has promised "a fair and humane immigration system" and pledged aid to tackle the root causes of poverty and violence that drive Central Americans to the United States.

Guatemalan officials said the initial group numbered roughly 6,000; an additional 3,000 crossed into the country on Saturday, they said.

A Guatemalan government statement denounced what it said was a violation of its national sovereignty and called on Honduras to "contain the massive departure of its inhabitants, through permanent preventive actions."

A police official said the migrants were allowed to cross into Guatemala because there were many families with children. They said officers, who were unarmed, feared tear gas could cause casualties.

In the meantime, Mexican and Central American authorities coordinated security and public health measures aimed at deterring mass unauthorised migration across the region.

Guatemala, Honduras, and Mexico deployed thousands of soldiers and riot police aimed at blocking the migrants` passage. But the caravan has grown considerably over the last 24 hours, with members citing a spiraling crisis of hunger and homelessness in Honduras as their reasons for joining.

Border agents asked the migrants for their papers -- and demanded proof of negative coronavirus tests -- but appeared to let many through who did not meet those requirements.

As the migrants moved northward in small groups, workers with the International Committee of the Red Cross and the UN High Commissioner for Refugees provided some with assistance.

Most of the migrants, many in sandals, carried backpacks with their few belongings.

The migrants are seeking a better life in America under Joe Biden after years of tough anti-immigrant policies under Donald Trump, but US authorities have already warned off the group.

Guatemala, Mexico and Honduras have an agreement with the US to stop north-bound migratory flows.

More than a dozen caravans, some with thousands of migrants, have set off from Honduras since October 2018. But all have run up against thousands of US border guards and soldiers under Trump, who characterized immigrants from Mexico as "rapists" and criminals.

The Mexican government said it would not allow the "illegal entry" of any migrant caravans and deployed 500 immigration officers to the border states of Chiapas and Tabasco.

Guatemalan migration officials said the Honduran group appeared to be heading for the border post at Tecun Uman in southern Mexico.

Trump said Friday he was extending a national emergency on the border with Mexico, a measure he first imposed in February 2019.

On Friday, Guatemalan military detained hundreds of migrants, including many families with young children.