US bases in Pacific within range of North Korea's 'new missile': Experts 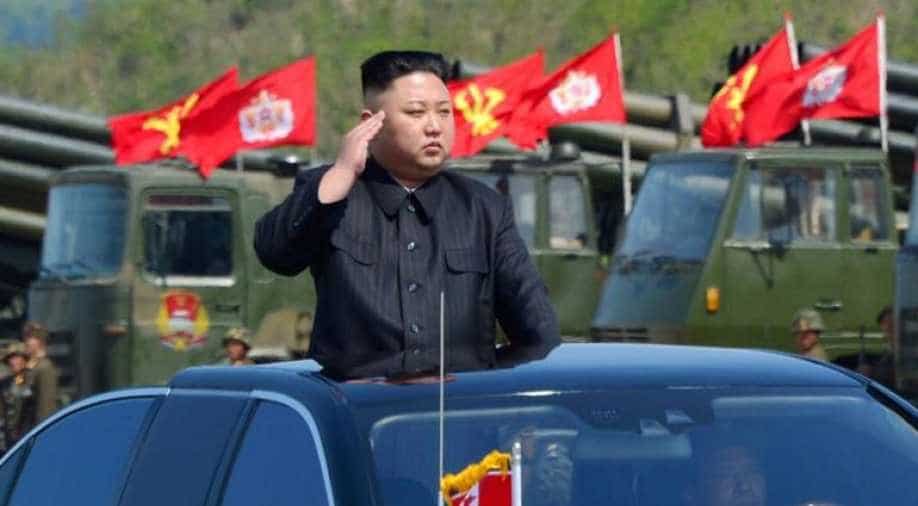 Kim Jong-Un reportedly personally oversaw the test, and 'hugged officials in the field of rocket research, saying that they worked hard to achieve a great thing'. Photograph:( Reuters )

Experts say US military bases in the Pacific are now within range of North Korea's 'new missile'||North Korea tested what it calls a 'new type of rocket' on Sunday||The new ground-to-ground, medium long-range strategic ballistic rocket is called the Hwasong-12

North Korea said Monday it had successfully tested a new type of rocket in its latest missile launch, as analysts said it showed an unprecedented range that brought US bases in the Pacific within reach.

Leader Kim Jong-Un personally oversaw the test, it said, and "hugged officials in the field of rocket research, saying that they worked hard to achieve a great thing".

The isolated North is under multiple sets of United Nations sanctions over its nuclear and missile programmes, which have triggered global alarm.

The missile was launched on an unusually high trajectory, with KCNA saying it flew to an altitude of 2,111.5 kilometres and travelled 787 kilometres before coming down in the Sea of Japan (East Sea).

That suggests a range of 4,500 kilometres (2,800 miles) if flown for maximum distance, analysts said.

It "represents a level of performance never before seen from a North Korean missile", aerospace engineering specialist John Schilling wrote on the respected 38 North website.

It appeared to demonstrate an intermediate-range ballistic missile (IRBM) that could "reliably strike the US base at Guam" in the Pacific, he said, and "more importantly, may represent a substantial advance to developing an intercontinental ballistic missile (ICBM)".

'Won't happen'
The North says it needs atomic weapons to defend itself against the threat of invasion and has carried out two atomic tests and dozens of missile launches since the beginning of last year.

Its goal is to develop a missile capable of delivering a nuclear warhead to the continental United States -- something President Donald Trump has vowed "won't happen".

Tensions between the two reached a peak in recent weeks, with Washington saying military action was an option under consideration and Pyongyang issuing threats of its own, sending fears of conflict spiralling.

Trump later appeared to hold open the door to negotiations, saying he would be "honoured" to meet Kim and called him a "smart cookie".

Last week the South elected a new president, Moon Jae-In, who advocates reconciliation with Pyongyang and said at his inauguration that he was willing "in the right circumstances" to visit the North to ease tensions.

But he slammed the latest  missile test as a "reckless provocation" after holding an emergency meeting with national security advisers.

Dialogue would be possible "only if the North changes its attitude", he said.

Strategic balance
In April the North put dozens of missiles on show at a giant military parade through the streets of Pyongyang, including one that appeared to be the type of device launched on Sunday.

The test "proved to the full all the technical specifications of the rocket" which was "capable of carrying a large-size heavy nuclear warhead", KCNA said.

There is no evidence yet that Pyongyang has mastered miniaturisation sufficiently to fit a nuclear weapon into a missile nose cone, or the re-entry technology needed to ensure it survives returning into Earth's atmosphere.

But it described another launch earlier this year as a drill for an attack on US bases in Japan -- which has long been within its range -- and David Wright of the Union of Concerned Scientists said the Hwasong-12 missile "has considerably longer range than its current missiles".

Schilling said the ability to hit Guam was not a game-changer, but that the new missile could be a step along the way.

"What would change the strategic balance is an ICBM capable of reaching the US mainland," he said.

"This is not that missile but it might be a testbed, demonstrating technologies and systems to be used in future ICBMs. It may be closer to an operational ICBM than had been previously estimated."

KCNA cited Kim as saying that the US strategy of what it called "militarily browbeating only weak countries and nations which have no nukes" would never work on the North.

"If the US dares opt for a military provocation against the DPRK, we are ready to counter it," it said.

- 'Flagrant menace' -
The United States called for tougher sanctions against the North, with the White House saying it "has been a flagrant menace for far too long".

The missile came down "so close to Russian soil... the president cannot imagine that Russia is pleased", it added in a statement.

Russia's defence ministry later said the missile landed about 500 kilometres from its territory and posed no threat.

Washington and Tokyo called for an emergency meeting of the United Nations Security Council, which was scheduled for Tuesday afternoon.

China, Pyongyang's sole major ally and main trading partner, which has been under growing US pressure to help rein in its wayward neighbour, urged restraint.

"All relevant parties should exercise restraint and refrain from further aggravating tensions in the region," said Beijing's foreign ministry.