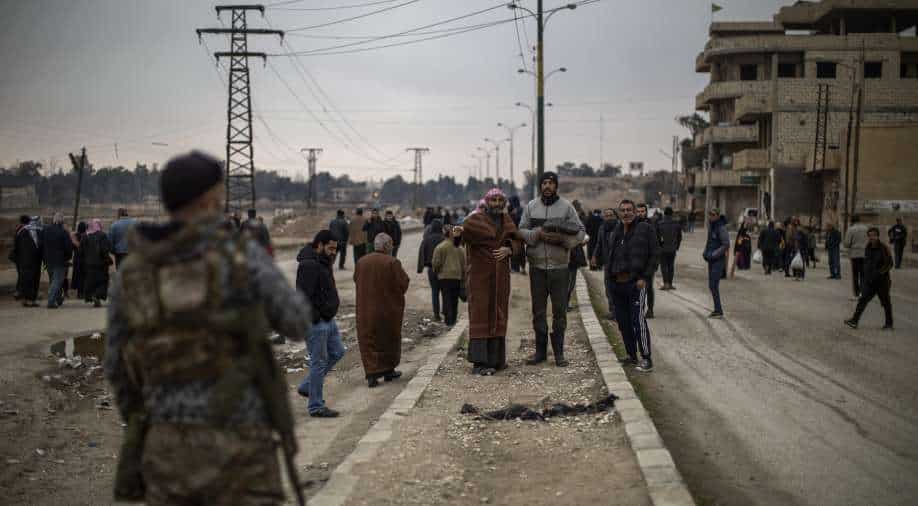 Syrians wait to return to their homes near a prison Photograph:( The New York Times )

The prison, in the city of al-Hasaka, housed thousands of Islamic State former fighters. Their fellow militants attacked a week ago in an attempt to free them.

Forces from a Kurdish-led militia on rooftops traded fire with dozens of Islamic State fighters still holed up in an embattled prison in northeastern Syria on Thursday, despite claims by the U.S.-backed militia a day earlier that it had regained full control of the entire complex.

The prison, in the city of al-Hasaka, housed thousands of Islamic State former fighters. Their fellow militants attacked a week ago in an attempt to free them. An official with one of the Syrian-Kurdish paramilitary groups battling the Islamic State said 60 to 90 militants from the group were still fighting from inside the partly destroyed prison complex, most of them attackers who had stormed the prison but some of them prisoners who had joined forces with them.

The prison attack was the starkest evidence yet of a resurgence of Islamic State across parts of Syria and Iraq, three years after the group lost the last territorial foothold in its so-called caliphate across a vast stretch of both countries. The extremists have also mounted a series of attacks on military forces in neighbouring Iraq in recent months.

The prison fight drew the U.S. military into the fray in support of the Kurdish-led Syrian Democratic Forces, or SDF, providing airstrikes, intelligence and armoured vehicles to cordon off the prison. This was the broadest confrontation between U.S. forces and the Islamic State since the end of the caliphate.

The fighting was also raging in surrounding areas near the prison complex.

At a traffic circle a few hundred yards from the prison complex in the centre of al-Hasaka, a New York Times team took cover along with a group of local journalists and civilians caught in the middle as Kurdish-led forces traded fire with Islamic State gunmen who had opened fire from a street near the prison.

Explosions from rocket-propelled grenades fired by the Kurdish-led forces at the prison and the sound of truck-mounted anti-aircraft guns rang out.

The SDF said two Islamic State fighters were killed in the engagement near the traffic circle, but there were no reports of civilians harmed in that clash.

A bulldozer emerged from the ruins of a cultural centre next to the prison complex carrying the crumpled body of an Islamic State fighter before dumping it in the back of a pickup truck.

At another building behind the cultural centre, which had been hit by an airstrike, SDF fighters pulled out the remains of two other Islamic State fighters. A charred oil tanker on its side still burned across the street.

SDF forces said the tanker and three others that were burned beside it had been destroyed in a U.S. airstrike.

Siyamend Ali, the head of media for the People’s Protection Units, one of the Kurdish factions in the SDF, said more than 3,000 detainees had surrendered and most had been taken to a new detention facility built by the U.S.-led coalition that has fought the Islamic State in Syria.

He said some of the Islamic State militants still inside the prison were believed to be foreign fighters.

“The prison attack has activated sleeper cells in other places,” Ali said.