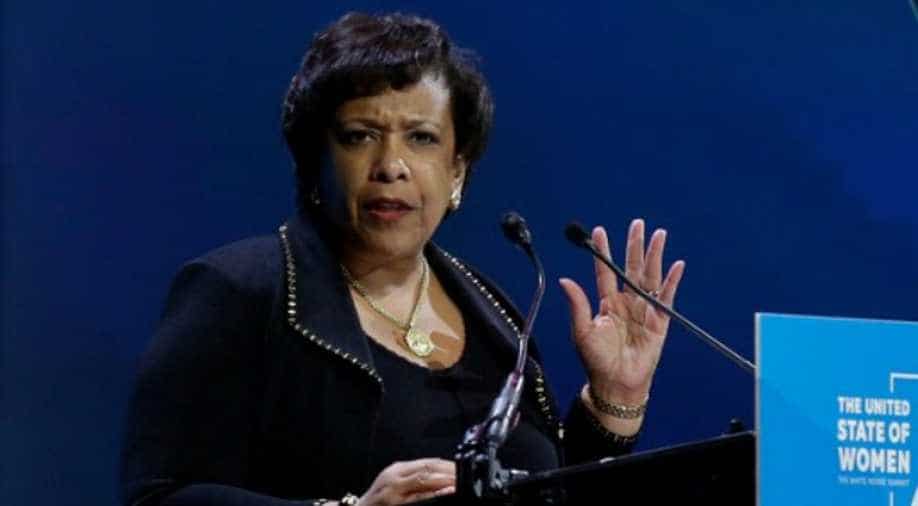 Loretta Lynch was appointed US attorney general by Democratic president Barack Obama and sworn in on April 1, 2015, well after Hillary Clinton left the Cabinet in 2013. Photograph:( AFP )

Follow Us
US attorney general Loretta Lynch, seeking to tamp down a firestorm over her meeting with former President Bill Clinton, said on Friday she will accept the recommendations of career prosecutors and the FBI director on whether to charge Hillary Clinton for mishandling emails.

The United States' top law enforcement officer, however, stopped short of saying she would recuse herself from the investigation of the Democratic presidential candidate.

"I will be informed of those findings, as opposed to never reading them or never seeing them, but I will be accepting their recommendations and their plan for going forward," Lynch said.

She was responding to questions from a Washington Post journalist who was introducing a talk by Lynch at the Aspen Ideas Festival, a gathering of government, technology and other business leaders in Aspen, Colorado.

Republicans, including presumptive Republican presidential nominee Donald Trump, have said a political appointee like Lynch should not be involved in the email investigation and that the Monday night meeting with Bill Clinton shows Lynch is too close to the Clintons.

With a regretful tone, Lynch said on Friday she would not privately meet with Bill Clinton again and that she understood how the meeting "casts a shadow" over the perception of the Justice Department's probe into Hillary Clinton's email use.

The attorney general said she has received many questions about her role in the investigation and "whether someone who was a political appointee would be involved in deciding how to investigate."

Republican lawmakers have called for an independent investigation of Hillary Clinton's use of a private email server while secretary of state, saying the Obama administration's justice department could not be free of bias.

In Washington, White House spokesman Josh Earnest told a daily news briefing that the investigation is being handled independently of the White House and President Barack Obama.

Lynch was appointed by the Democratic president and sworn in on April 1, 2015, well after Hillary Clinton left Obama's Cabinet in 2013.

Career prosecutors are not appointed by a president and may serve through different administrations. The FBI director is appointed by the president but is not part of his Cabinet and is considered apolitical.

Lynch said on Friday that she had already decided to accept whatever recommendations prosecutors presented her before her meeting with Bill Clinton.

The private meeting with the former president took place on Lynch's plane after she landed in Phoenix on Monday night. Bill Clinton was leaving the airport after a rally for his wife earlier that day.

Lynch told reporters earlier this week that she did not discuss the email probe or other matters pending before the justice department with Bill Clinton, calling their meeting "primarily social."

The FBI is investigating Hillary Clinton's email use and whether laws were broken as a result of a personal email server kept in her Chappaqua, New York, home while she was secretary of state, an issue that has overshadowed her campaign.

She apologized last year for using the server, saying that while she did nothing wrong, she should have used two email accounts: one for state department business and another for personal matters.

Representatives for her campaign could not be reached immediately for comment on Friday.

Trump on Thursday called Lynch's meeting "a sneak" and questioned the judgement of both Bill Clinton and the attorney general.

In a tweet on Friday, the wealthy businessman said the meeting showed the US political system was "totally rigged" and that Hillary Clinton had bad judgment.

"Bill's meeting was probably initiated and demanded by Hillary!" Trump said on Twitter.

The justice department, along with the White House, has said the probe should be free of political interference.