US, allies meet to find diplomatic way out of North Korea crisis 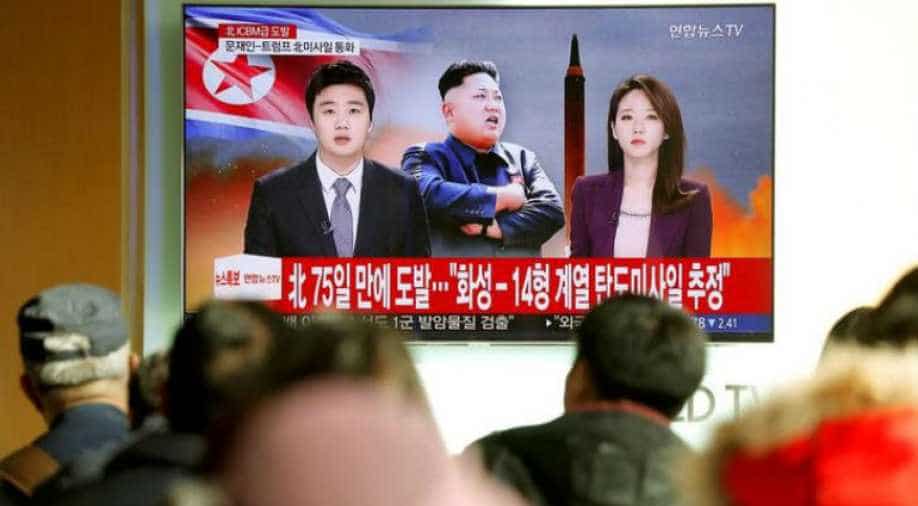 Tensions between Washington and Pyongyang, which claimed it had successfully tested ballistic missiles that could deliver atomic warheads to the United States, appear to have calmed as well. (Representative image) Photograph:( Reuters )

The two-day Vancouver meeting hosted by Canada and the United States comes amid signs of easing tensions on the Korean peninsula, after the North and South met for the first time in two years and Pyongyang agreed to sent athletes to the Pyeongchang Winter Olympics.

And tensions between Washington and Pyongyang, which claimed it had successfully tested ballistic missiles that could deliver atomic warheads to the United States, appear to have calmed as well.

But the United States, which will review with allies at the summit the effectiveness of current sanctions against the hermit kingdom and explore adding more, remains skeptical that Kim is ready to negotiate away North Korea's weapons program.

Over the weekend, a false alarm in Hawaii warning of an incoming ballistic missile rattled nerves, while US President Donald Trump and North Korea's Kim Jong-Un have  traded bluster over who has the bigger nuclear launch button at his desk.

The so-called Vancouver Group is formed by 20 countries that fought in the 1950-53 Korean War. They include Australia, Britain, France, India, Japan, the Philippines and South Korea. Military officials will also be present at the meeting.

Many have questioned the utility of a conference where China -- Pyongyang's main ally -- and Russia are absent.

But officials said both countries, which hold veto power at the United Nations Security Council, would be briefed afterward.

On Monday at his annual press conference, Russian Foreign Minister Sergei Lavrov repeatedly attacked the US, accusing Washington of issuing ultimatums and failing to recognize "the reality of the emerging multipolar world."

"Unfortunately, our American colleagues and their allies still want to do business solely on the basis of issuing ultimatums and do not want to listen to the views of other centres of world politics," he said, adding that Washington was to blame for having "seriously aggravated" tensions on the Korean peninsula.

Pope Francis, meanwhile, admitted that he was frightened by the prospects of an accidental nuclear war.

"I think we are at the very edge," he told reporters aboard his plane en route to Chile for a weeklong visit there and in Peru.

"I am really afraid of this. One accident is enough to precipitate things."

The Vancouver meeting kicked off late Monday with a dinner and several bilateral meetings, before a full gathering on Tuesday to hammer out next steps in the standoff.

Among the proposals to be considered is sending warships to the Sea of Japan to stop and inspect suspect ships bound for North Korea in order to enforce sanctions.

Some countries, however, have warned that such methods could increase military tensions or be interpreted as an act of war by Kim's isolated regime.

The ultimate aim is to force Kim into a diplomatic negotiation to abandon the weapons his regime sees as crucial for its survival.

Trump recently said that, under the right circumstances, he would be willing to speak directly with the North Korean leader, whom he has described as mad and a "rocket man."

Japan's Prime Minister Shinzo Abe, meanwhile, sought to drum up EU pressure on North Korea over the weekend during a six-country trip to the Baltics and the Balkans.

South Korean President Moon Jae-In, who advocates dialogue with the North but remains critical of Pyongyang's weapons drive, said last week he was willing to have a summit with Kim "under the right conditions", but added that "certain outcomes must be guaranteed."

In a setback for such hopes, Pyongyang slammed Moon as "ignorant and unreasonable" for demanding preconditions -- possibly a step toward denuclearization -- for a summit.

"The South Korean chief executive should not be dreaming," the state-run KCNA news agency said in an editorial, accusing Moon of "brownnosing" the United States.

North Korea boycotted the 1988 Summer Games in Seoul. Its agreement to send athletes, an orchestra and high-level officials to next month's Winter Olympics is seen in part as a move to ease military tensions with the US.

Seoul touted the recent inter-Korean talks as a potential first step to bringing the North into negotiations over its nuclear arsenal.

Further bilateral talks between the North and South are scheduled for Wednesday, after the Vancouver meeting.