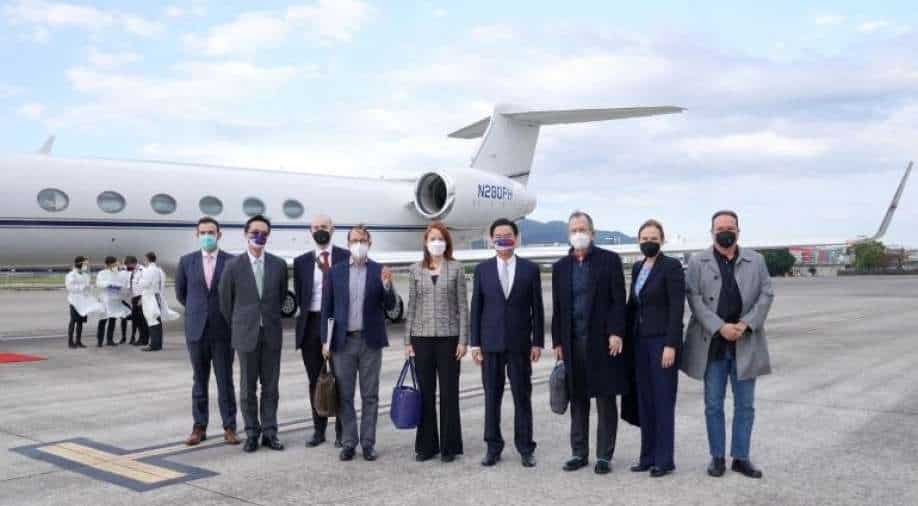 Mike Mullen, former chairman of the US Joint Chiefs of Staff greets Taiwan Foreign Minister Joseph Wu as he and other members of the US delegation arrive at Taipei Songshan airport in Taipei, Taiwan Photograph:( AFP )

Democratic Taiwan has watched the Ukraine situation closely as it lives under constant threat of a Chinese invasion, with Beijing claiming sovereignty over the island and vowing to seize it one day, by force, if necessary

The United States has a delegation comprising of former top US defense officials to Taiwan amid a looming threat from China.

Former Chairman of the Joint Chiefs of Staff Mike Mullen is leading the five-person delegation that is to meet with President Tsai Ing-wen and other top officials during the two-day visit.

Mullen, a retired Navy admiral who served as the top US military officer under former presidents George W. Bush and Barack Obama, is being accompanied by Meghan O'Sullivan, a former deputy national security adviser under Bush, and Michele Flournoy, a former undersecretary of defense under Obama.

Two former National Security Council senior directors for Asia, Mike Green and Evan Medeiros, are also on the trip, which is intended to "demonstrate our continued robust support for Taiwan."

Russia’s invasion of Ukraine has drawn fresh attention to China’s threat to use force to annex self-governing democratic Taiwan, which it claims as its own territory.

Democratic Taiwan has watched the Ukraine situation closely as it lives under constant threat of a Chinese invasion, with Beijing claiming sovereignty over the island and vowing to seize it one day, by force, if necessary.

Washington diplomatically recognizes Beijing over Taipei but it is also bound by Congress to sell Taiwan weapons to defend itself.

Tsai’s office said the delegation had been appointed by US President Joe Biden and the visit would permit “an in-depth exchange of views on Taiwan-US cooperation issues in various fields.”

The visit comes at a time when Taiwan has stepped up its alert level, wary of China taking advantage of a distracted West to move against it.

Taiwan Premier Su Tseng-chang told reporters earlier on Tuesday that the trip showed "the importance both of the Taiwan-US relationship and Taiwan's position" as well as the staunch US support for the island. "It's a very good thing," he added.

In Beijing, Chinese Foreign Ministry spokesperson Wang Wenbin dismissed the US delegation’s visit, saying it was “futile for the US to send anyone to demonstrate its so-called support for Taiwan.”

Wang told a daily briefing that China urges the US to honor past communiques signed with China, “stop all forms of official exchange with Taiwan, and handle Taiwan-related issues with caution so as to avoid further serious damage to the overall situation of China-US relations.”