The United States may let in people living in Hong Kong amid the ongoing China-Hong Hong crisis, which has spurred protests across the city.

China’s approval of security laws in the city make disapproval of the Chinese government a crime, with sedition as one of the main charges now allowed to be used against naysayers.

The US Secretary of State Mike Pompeo said his country will let in those who aren’t “comfortable” in Hong Kong. The US has continuously called China’s actions an attempt to subvert democracy in the territory.

The Guardian reported that he claimed the same during an interview with the American Enterprise Institute.

Recently, UK ministers wrote to the government to begin a coordinated international response to the crisis, which would also include offering hosting Hong Kongers in the country. The UK’s Indian-origin Home Secretary Priti Patel promised support to the people of Hong Kong. More people from Hong Kong are now eligible to apply for UK citizenship, as an international relief measure. 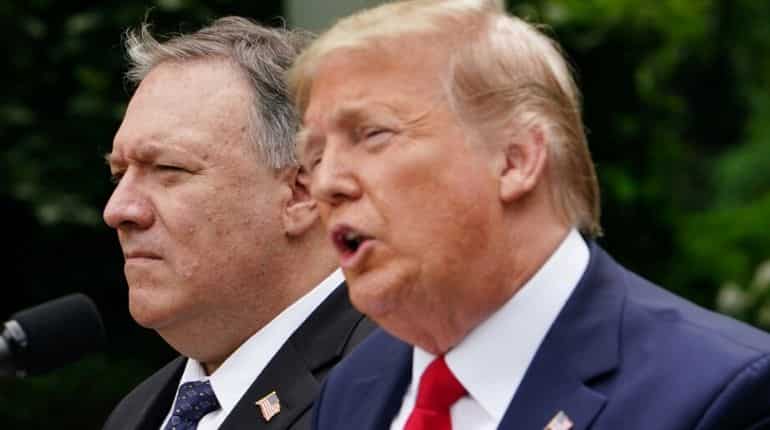 US President Donald Trump, with US Secretary of State Mike Pompeo, holds a press conference on China on May 29, 2020, in the Rose Garden of the White House in Washington, DC | AFP

Similarly, the US might allow people in distress to move to its territory. “Are we going to consider that as a possibility to make the United States welcome Hong Kong people to come here and bring their entrepreneurial creativity to our country?”

He said that they’d “consider it”.

However, the city was British territory until it was handed back to China as part of its “Two Systems, One Country” agreement which gave democratic rights and freedoms to people of the city. He addressed this difference in British and American policy and said, “I don’t know precisely how it will play out. The British have, as you know, a different relationship. A lot of these folks have British national passports. There’s a long history between Hong Kong and the United Kingdom; it’s very different.”

The Secretary of State also reiterated his concern with the Chinese Communist Party’s attempt to assert control in the city. “But in the event that they don’t go in that direction, which is, I think, the more likely case given what we’ve seen them do over the past several weeks, the United States is going to impose a cost on the decision-makers who deny this freedom to the people of Hong Kong”, he said.

After China formally began the process of implementing the security laws, the United States withdrew the special status allotted to the city, which could have economic reparations in the city.

China recently hit out at US amid ongoing anti-racism protests in the city, and accused the country of hypocrisy as it using the same tools of suppression like tear gas, and military might to contain the protests.