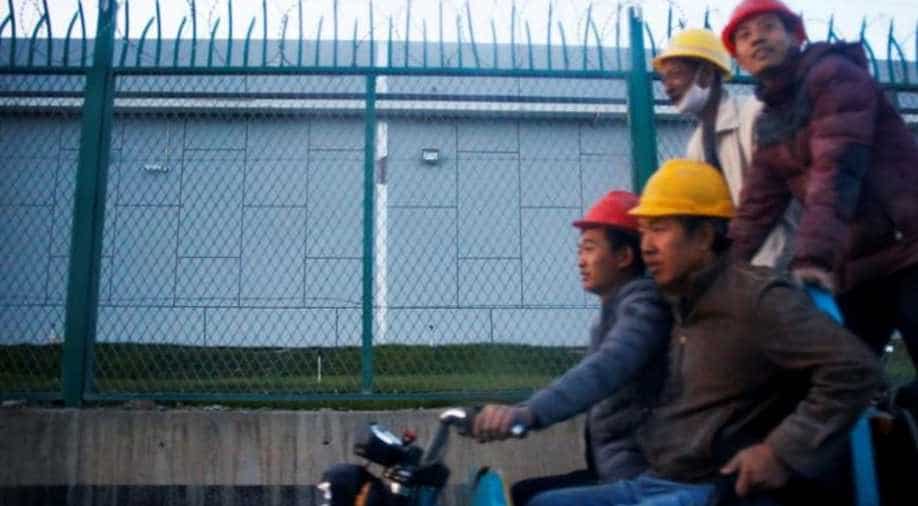 Workers ride past the perimeter fence of what is officially known as a vocational skills education centre in Dabancheng, in Xinjiang Uighur Autonomous Region Photograph:( Reuters )

As allegations of human rights violations in Xinjiang mount, with a growing number of Western lawmakers accusing China of genocide, Beijing is focussing on discrediting the female Uighur witnesses behind recent reports of abuse

China, under growing global pressure over its treatment of a Muslim minority in its far west, is mounting an unprecedented and aggressive campaign to push back, including explicit attacks on women, who have made claims of abuse.

As allegations of human rights violations in Xinjiang mount, with a growing number of Western lawmakers accusing China of genocide, Beijing is focussing on discrediting the female Uighur witnesses behind recent reports of abuse.

Chinese officials have named women, disclosed what they say is private medical data and information on the women's fertility, and accused some of having affairs and one of having a sexually transmitted disease. The officials said the information was evidence of bad character, invalidating the women's accounts of abuse in Xinjiang.

"To rebuke some media's disgusting acts, we have taken a series of measures," Xu Guixiang, the deputy head of Xinjiang's publicity department, told a December news conference that was part of China's pushback campaign. It includes hours-long briefings, with footage of Xinjiang residents and family members reading monologues.

A Reuters review of dozens of hours of presentations from recent months and hundreds of pages of literature, as well as interviews with experts, shows a meticulous and wide-reaching campaign that hints at China's fears that it is losing control of the Xinjiang narrative.

"One reason that the Communist Party is so concerned about these testimonies from women is because it undermines their initial premise for what they're doing there, which is anti-terrorism", said James Millward, a professor of Chinese history at Georgetown University and expert in Xinjiang policy.

"The fact that there are so many women in the camps ... who don't have the faintest appearance of being violent people, this just shows how this has nothing to do with terrorism."