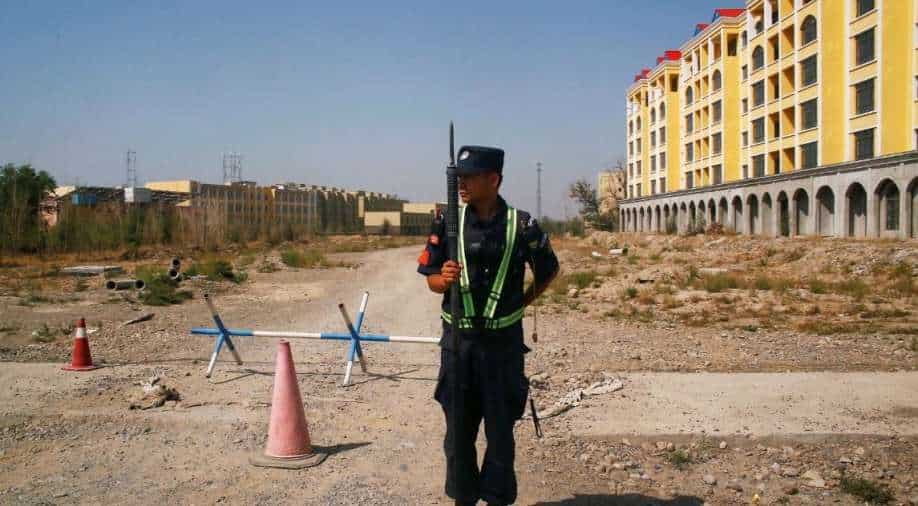 File photo: A Chinese police officer takes his position by the road near what is officially called a vocational education centre in Yining in Xinjiang Uighur Autonomous Region. Photograph:( Reuters )

The US has accused China of mass detention, torture, forced labour and genocide in Xinjiang

UN Human Rights Chief Michelle Bachelet can visit Xinjiang, China's Foreign Minister Wang Yi said on Saturday (February 19). However, a full-scale investigation is highly unlikely as Beijing has said it doesn't welcome any probe based on the presumption of guilt in the region.

Some of the Western countries have accused China of 'egregious' human rights violations in the Xinjiang region against the Uyghur Muslims, which China has repeatedly denied.

The US has accused China of mass detention, torture, forced labour and genocide in Xinjiang. The issue remained in headlines before and during the 2022 Winter Olympics in Beijing.

Some countries like the United States, Canada, the United Kingdom and Australia announced a diplomatic boycott of the Beijing Olympics. They didn't send government officials to the Games but athletes from the mentioned countries participated.

But on being asked if Bachelet would have unrestricted access in Xinjiang, Wang said by video at the Munich Security Conference: "(China) rejects all kinds of biases, prejudices and uncalled-for accusations."

China says the camps are re-education and training facilities and denies any abuse, saying it is fighting religious extremism. The so-called systematic forced labour or education camps are all lies and fabrication, said Wang.

WATCH: The US adds China's Tencent & Alibaba sites in the notorious markets list