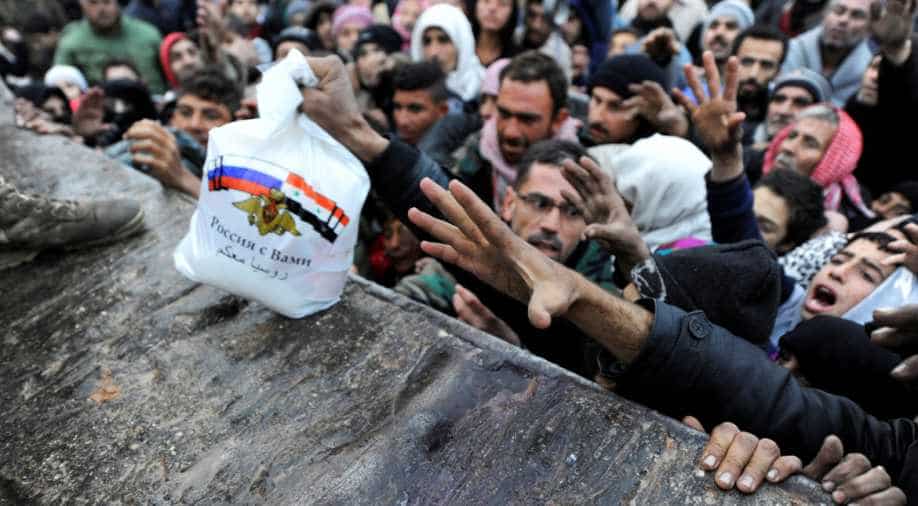 Syrian President Bashar al-Assad's forces have carried out the four-month siege to retake control. In photo: Syrians who have been evacuated from eastern Aleppo, reach out for Russian food aid on November 30, 2016. Photograph:( Reuters )

A top UN envoy on Wednesday pleaded with the Security Council to help break the siege of Aleppo, warning that residents of the Syrian city were at risk of extermination.

"For the sake of humanity we call on -- we plead -- with the parties and those with influence to do everything in their power to protect civilians and enable access to the besieged part of eastern Aleppo before it becomes one giant graveyard," said Stephen O'Brien, the UN under-secretary-general for humanitarian affairs.

O'Brien, speaking to a special Security Council session by video-link from London, said that the clock was ticking on the city as the winter set in.

Residents have been reduced to scavenging for food, hospitals are not functioning after repeated military strikes and an estimated 25,000 people have taken dangerous escape routes out of eastern Aleppo since Saturday alone, O'Brien said.

O'Brien said that aid convoys were ready to roll in from Turkey and western Aleppo but that they needed an end to the siege and protection for civilians.

"These are neither new nor complicated demands -- those common threads of humanity that we all have a responsibility to rally around," he said.

"Those parties that can't or won't live up to their basic obligations should know that they will one day be held accountable for their actions," he said.

O'Brien said he faced the persistent question as he traveled -- "Why on Earth can the Security Council not come together to unite to put a stop to this suffering?"

Britain's ambassador, Matthew Rycroft, said he had a simple answer to O'Brien's question on why the Security Council could not act -- Russia.

He accused Russia, which in October vetoed a resolution to stop the bombing in Aleppo, of supporting "a deliberate act of starvation and a deliberate withholding of medical care."

"The Syrian regime and Russia have been executing a plan that has now laid one million people under siege. And executing is an all too appropriate word," he said.

Russia's envoy, Vitaly Churkin, brushed off criticism and said Syria was seeking to eliminate extremists such as the Al-Nusra Front, which has rebranded itself the Fateh al-Sham Front after severing ties to Al-Qaeda.

"We vehemently condemn any attempts to protect terrorists including any political action on a humanitarian pretext which, sadly alas, UN humanitarian works have been dragged into," Churkin said.

He accused Western powers of hypocrisy, saying there were also great humanitarian needs in the northern Iraqi city of Mosul and Yemen where the United States is on the opposite side.

The US ambassador, Samantha Power, urged the Security Council to pass a resolution sponsored by Egypt, New Zealand and Spain that would mandate a 10-day military halt to allow humanitarian supplies to enter Aleppo.

"This is a no-brainer. Anyone who tells you otherwise does not have the survival of Syrian civilians at heart," Power said.

But she feared a new Russian veto and acknowledged a brief halt "is barely even a Band-Aid and it is a sign in some ways of just how low our bar has become."