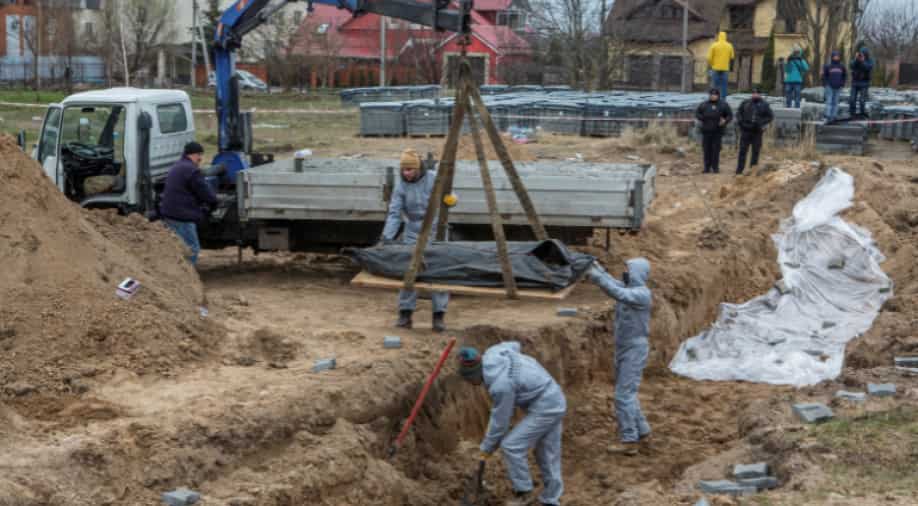 Forensic technicians exhume the bodies of civilians who Ukrainian officials say were killed during Russia’s invasion and then buried in a mass grave in the town of Bucha, outside Kyiv Photograph:( Reuters )

The Bucha district, which has become synonymous with allegations of Russian war crimes, is the place where over 1,000 dead bodies have been discovered

The Ukrainian police on Saturday (April 30) found three bodies with their hands tied in the town of Bucha, outside Kyiv.

It issued a statement saying, "On April 29, a pit with the bodies of three men was found in the Bucha district."

"The victims' hands were tied, cloths were covering their eyes and some were gagged. There are traces of torture on the corpses, as well as gunshot wounds to various parts of the body," as per the statement.

The Bucha district, which has become synonymous with allegations of Russian war crimes, is the place where over 1,000 dead bodies have been discovered.

According to Kyiv's regional police chief Andriy Nebytov, "The victims were tortured for a long period of time, bullet wounds were found on the extremities. Finally, each of the men was shot in the ear."

He said the men's clothes showed they were civilians and were found in shallow graves in woods near the village of Myrotske, close to what had been Russian military positions.

In the Kyiv region, 1,202 bodies of civilians have been examined by the forensic laboratories after being killed by Russian occupiers.

Also see | Russia-Ukraine crisis: War crimes in Bucha, here’s all what you need to know

Russian President Vladimir Putin has called his attack on Ukraine a ''special military operation'' to demilitarise its neighbour.

Russia facing a massive boycott by the West which has levied a plethora of sanctions on both its officials and oligarchs.

Ukrainian security officers are cracking down on the ''traitors'' helping the Russian troops, with President Volodymyr Zelensky saying “Accountability for collaboration is inevitable, and whether it will happen tomorrow or the day after tomorrow is another question.”

“The most important thing is that justice will be served inevitably,” he told news agency Reuters.

''Ukrainian authorities are actively using the practice of Western countries, in particular the UK, which imposed harsh restrictions on civic liberties in warring Northern Ireland'' said Volodymyr Yavorsky, coordinator at the Centre for Civil Liberties, one of Ukraine’s largest human rights groups.

''Some of those restrictions were deemed unjustified by human rights advocates, but others were justified, when people’s lives were in danger,” he said.