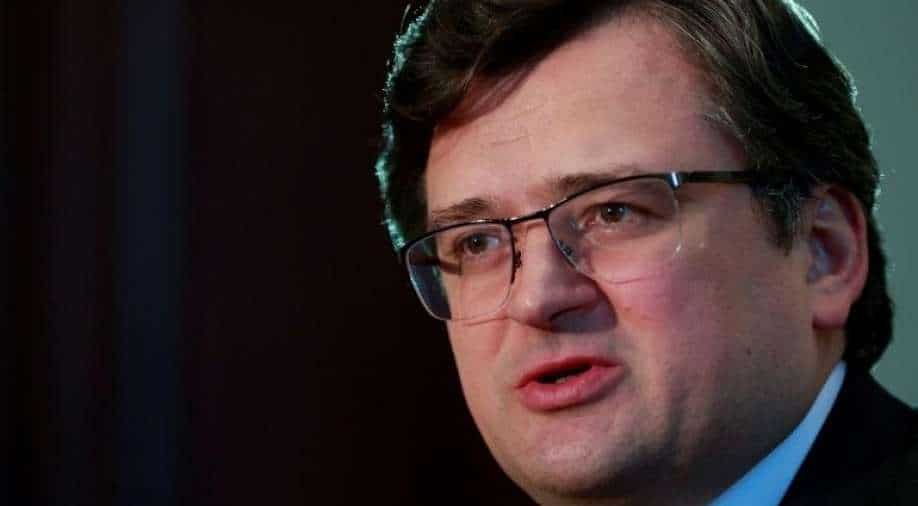 Dmytro Kuleba, Ukrainian Foreign Minister, told foreign media at a briefing that it is better to act now than later to 'deter Russia'. Photograph:( Reuters )

Kyiv and its Western allies accuse Russia of sending troops and arms to support the separatists, a charge Moscow denies

Kyiv called for swift action on Monday to ward off Moscow's threat of invasion, saying that a Russian military operation could be launched "in the blink of an eye".

Russian military activity near Ukraine has alarmed Western countries this month, with the United States, saying it is "concerned" about an influx of troops near the border.

Dmytro Kuleba, Ukrainian Foreign Minister, told foreign media at a briefing that it is better to act now than later to "deter Russia".

"What we are seeing is very serious. Russia has deployed a large military force in regions close to Ukraine's state border."

"If Russia decides to undertake a military operation, things will happen in literally the blink of an eye," the foreign minister told reporters.

According to him, Moscow has massed 115,000 troops around Ukraine, on the Crimean peninsula, which Russia annexed in 2014, and in two eastern provinces occupied by pro-Russian separatist forces.

He added that tanks, artillery, electronic warfare systems, and air and naval forces had also been deployed.

However, we will "fight back," he said, adding that Ukraine's military has grown "incomparably stronger" than a few years back in 2014 when breakaway fighters took over the Donetsk and Lugansk regions in a simmering conflict that has claimed over 13,000 lives.

Kyiv and its Western allies accuse Russia of sending troops and arms to support the separatists, a charge Moscow denies.

Watch | Gravitas: Will Ukraine witness a coup in the next 36 hours?

Having seen an increase in violence at the beginning of the year, Russia sent around 100,000 troops to Ukraine's borders in the spring, causing worries about a major escalation.

The Russians later announced a pullback, but Ukraine and ally the United States at the time said the withdrawal was limited.

This new Russian troop movement has alarmed Ukraine, the United States, NATO, and the European Union in recent weeks, and they have warned of an invasion.

Moscow has dismissed the claims, accused Kyiv of "provocations" and has instead blamed Washington for escalating tensions in the region.

Pentagon spokesman John Kirby called Russian troop movements "an continuing concern" and pledged US support for Ukrainian forces, though he downplayed expectations of a direct US military intervention.

"We're watching it very closely," he told reporters, adding: "We don't envision any US military intervention in this conflict."