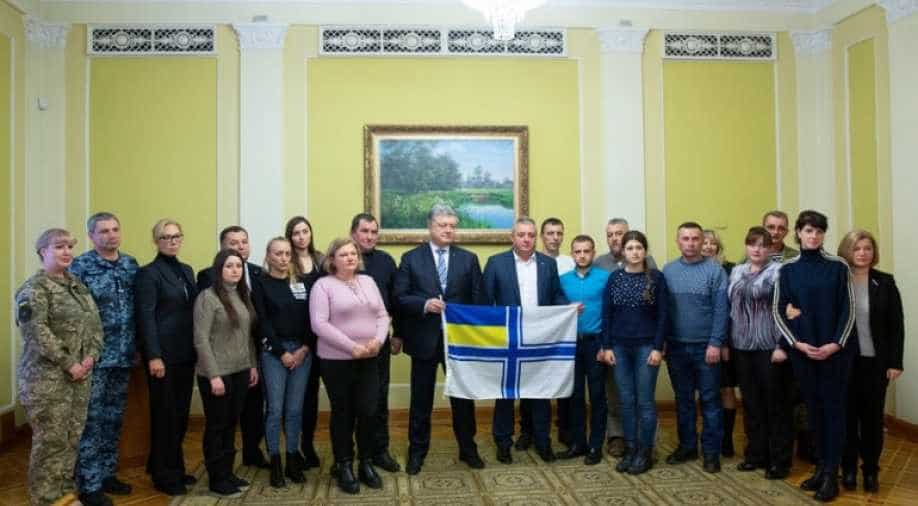 Ukrainian President Petro Poroshenko (center) holding Ukrainian Navy Flag during his meeting with relatives of the sailors arrested after the seizure of their navy vessels by Russia. Photograph:( AFP )

Russia accuses the Ukrainian sailors of violating its maritime borders.

Ukraine called on Friday before an international tribunal for the "urgent" release of its sailors held by Russia since their International Tribunal was captured off Crimea last November.

The diplomatic incident has heightened tensions between the neighbours locked in conflict for the last five years.

Ukraine's deputy foreign minister Olena Zerkal, addressing the International Tribunal for the Law of the Sea in the German city of Hamburg, called for the immediate release of the 24 sailors being held in Moscow.

Russia accuses the Ukrainian sailors of violating its maritime borders.

Last November, Russia opened fire upon, then captured the sailors manning three Ukrainian vessels off Crimea, which were trying to pass through the Kerch Strait from the Black Sea to the Sea of Azov.

"From the moment of the detentions, Ukraine has worked urgently to solve this matter", said Zerkal who insisted her country has given "Russia every opportunity to settle the issue by diplomatic means".

She described Russia's conduct as "a profound violation" of "international law" and demanded the "urgent" release of the sailors.

"Each additional day of detentions, each interrogation, each court case aggravates the dispute between the parties".

Russia did not send representatives to the hearing in Hamburg as it does not recognise the court's jurisdiction. Zerkal greeted its absence with "regret".

Outgoing Ukrainian President Petro Poroshenko has insisted the sailors are "prisoners of war" and described their detention as "blatant proof that Russia continues to show cynical disrespect for human rights".

"We expect that in a matter of weeks the Tribunal will oblige Russia to release our sailors and Ukrainian ships, and its actions will be considered illegitimate," Poroshenko said in a statement last month.

"Russia still has a chance to free our sailors and ships without waiting for the formal recognition of the international crime committed by the Kremlin."

The Ukrainian sailors face up to six years in prison for illegally crossing Russian borders, lawyers have said.

Critics of the Kremlin have accused Russia of preparing a show trial.

The capture of the Ukrainian ships was the most dangerous direct clash in years between the ex-Soviet neighbours.

They have been locked in a confrontation since 2014 when Russia annexed Crimea and supported an insurgency in eastern Ukraine. More than 10,000 people have been killed in the conflict.