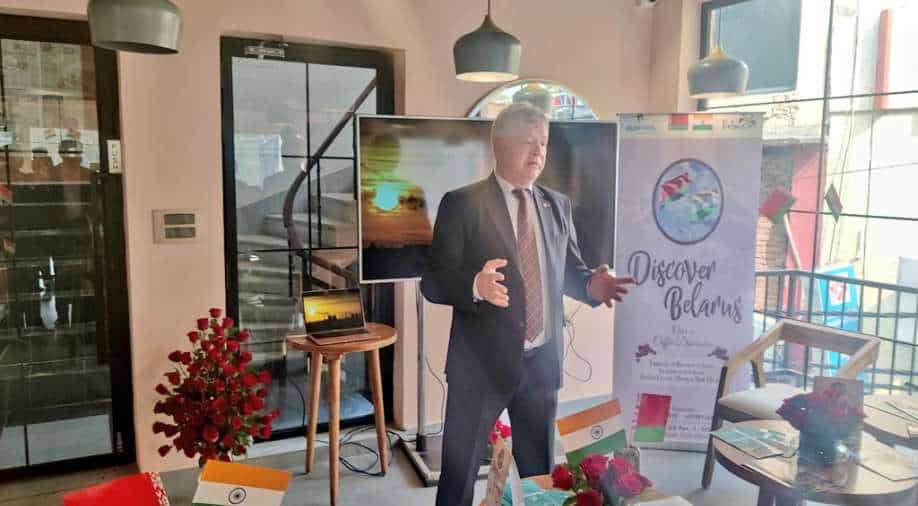 Amid worsening situation in eastern Europe over Ukraine, Belarus envoy to India Andrei Rzheussky asserted his country’s position on Tuesday saying that they will “never create war to neighbours".

The remark from the ambassador comes as tensions have been rising between the US and its ally Russia over the latter’s troop build-up near Ukrainian borders.

The security talks between the US, NATO allies and Russia have failed even as the possibility of war looms large over Europe.

In response to a WION question, if war could happen in Europe over the current crisis, Rzheussky said, "We never create war to our neighbours. If we detect threat on our territory, we will respond. But as our president reiterated, only if somebody enters our territory with not so peaceful purposes."

Rzheussky was referring to Belarusian President Alexander Lukashenko’s statement in parliament on Friday that if “war breaks out, everyone will lose.”

The envoy said, "As for Belarus, as our president mentioned a couple of days ago during his address to the Parliament that we are a peaceful nation, peaceful people, but if you would like to have peace, you should be prepared for war. That is why we are conducting joint military exercises with our close ally Russia. We should be prepared for challenges which exist around the world, even on our borders".

Belarus was recently in news over the migrant crisis with neighbours Poland, Lithuania and Latvia.

Talking about the crisis, the envoy said, "We still have between 500-1,000 people who are on our territory. Because of the winters, we allow them to live in a special warehouse facility.”

The number of migrants from West Asian countries had amassed near the border with Poland, even as the cold temperatures had led to massive humanitarian crisis.

The western countries accused Belarus of trying to weaponise migrants due to the sanctions on the country.

“They escaped from a difficult condition in their own countries and want to go to Europe for a better life. But unfortunately, European countries closed their borders and harshly stopped them from entering,” he said.

The envoy was speaking to WION during an event in Delhi. Belarus has opened a tourism information centre in the national capital.

The envoy said, "It is a proper time to promote Belarus in India. Belarus is a perfect place for Indian people to visit and to see how beautiful my country is. Our country is called blue eye because of thousands of lakes. and rivers. It is also called the lung of Europe, because of forest cover that spans over 1/3rd of the territory.”