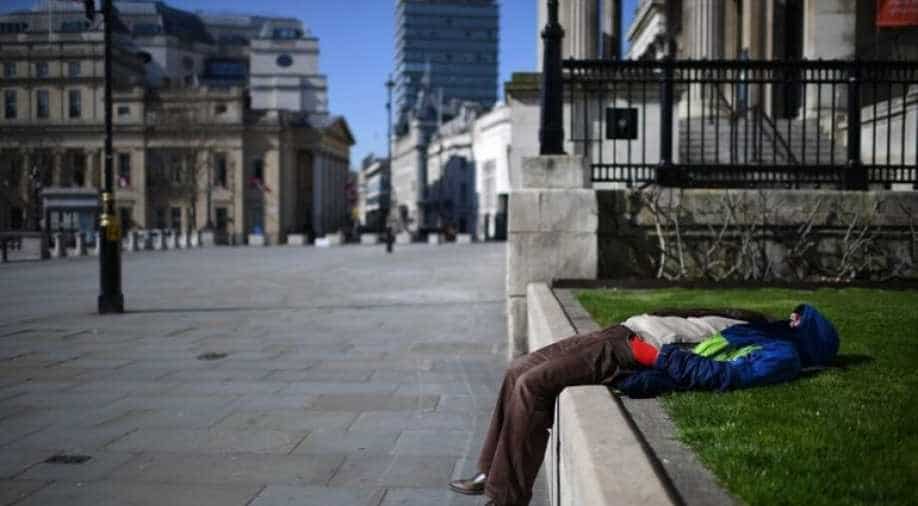 A man rests in a deserted Trafagar Square in central London on the morning on March 24, 2020 after Britain ordered a lockdown to slow the spread of the novel coronavirus Photograph:( AFP )

Britons have been told to stay inside wherever possible to limit the spread of COVID-19, joining millions of people on lockdown worldwide.

The British government on Sunday said that the coronavirus lockdown could last a "significant" time as a leading expert warned it could be in place until June.

"I can't make an accurate prediction but everyone I think does have to prepare for a significant period when these measures are still in place," cabinet minister Michael Gove told the BBC.

Britons have been told to stay inside wherever possible to limit the spread of COVID-19, joining millions of people on lockdown worldwide.

The measure was introduced amid warnings that infection rates were spiralling, and new figures Saturday revealed that more than 1,000 people with coronavirus have now died in Britain.

Prime Minister Boris Johnson initially said the shutdown would be for three weeks.

Professor Neil Ferguson of Imperial College London, one of the epidemiologists advising the government, told the Sunday Times the lockdown could last months.

"We're going to have to keep these measures in place, in my view, for a significant period of time -- probably until the end of May, maybe even early June. May is optimistic," he said.

In a leaflet being sent to more than 30 million British households, the prime minister warned that "things will get worse before they get better".

"The more we all follow the rules, the fewer lives will be lost and the sooner life can return to normal," Johnson wrote.

But he added: "We will not hesitate to go further if that is what the scientific and medical advice tells us we must do."

The Conservative leader has himself tested positive for coronavirus, as has health minister Matt Hancock, but Downing Street insists he is still in charge.

Separately, Gove also used his BBC interview to take a swipe at China, where the first cases of COVID-19 emerged.

"Some of the (early) reporting from China was not clear about the scale, the nature, the infectiousness of this," he said.