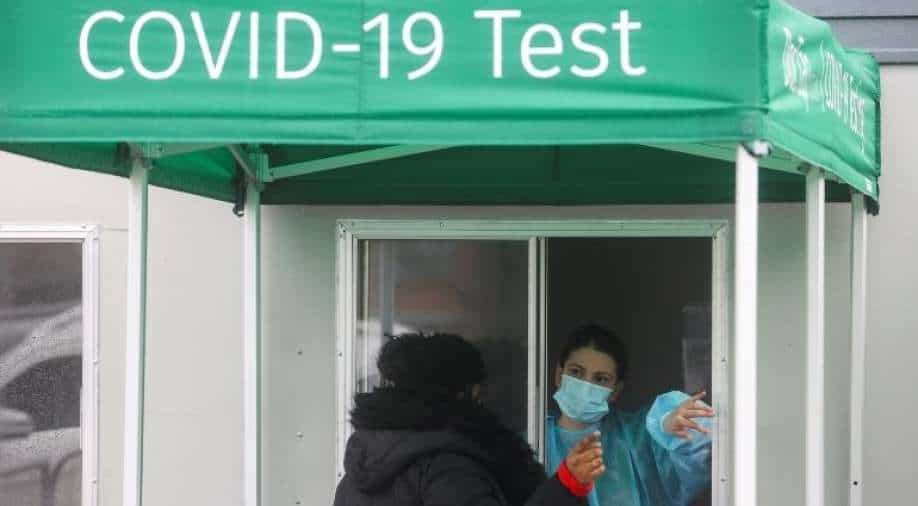 A health care worker speaks to a woman at the coronavirus disease (COVID-19) mobile testing site at Heathrow Airport, in London Photograph:( Reuters )

Health officials in Britain have identified six cases of a highly contagious coronavirus strain first identified in the Brazilian city of Manaus, including one in a person who has not been traced.

Three of the cases of the variant are in Scotland and two in southwest England. The sixth individual has not been identified because they did not correctly fill in a form with their contact details. Public Health England said it was working to find the person and is conducting local mass testing to see whether the variant has spread in the community

"If you've had a test on the 12th or 13th of February, (and) haven't had your results back, please get in touch," vaccination minister Nadhim Zahawi told Times Radio. "We are working with the postal system to try and locate them."

The P.1 variant includes mutations similar to those found in a variant first detected in South Africa known as B.1.351, which has raised similar concerns.

Adam Finn, a member of the UK Joint Committee on Vaccination and Immunisation, told the BBC: "The evidence we have suggests that certainly the South African variant and potentially this Brazilian variant, which is somewhat similar - the vaccines we have at the moment are less effective at reducing at least mild disease and possibly transmission.

"We are optimistic that the vaccines will continue to prevent severe disease, but the evidence for that is still fairly limited."

One of the cases in the household in South Gloucestershire had flown from Sao Paulo in Brazil via Zurich to London, arriving on February 10. Public health officials said they were following up with all passengers.

All three of the Scottish cases were identified as people who had flown from Brazil to Aberdeen via Paris and London who self-isolated for the required period of 10 days.

By Sunday, over 20 million people in Britain had been given a first dose of COVID-19 vaccine - just over 30 per cent of the population, while around 800,000 had had a second dose.

Manufacturers are working on measures to adapt their vaccines to mutations of the virus.

Scientists say the variant is more transmissible and may be more resistant to existing vaccines than the original virus, and may be able to infect people who have previously had COVID-19.

Direct flights from Brazil to the UK have been halted, but the newly identified cases have been linked to people who came to the UK from Brazil through other European cities in early February.

The arrivals came days before the UK imposed a 10-day hotel quarantine on people arriving from high-risk countries, including Brazil.