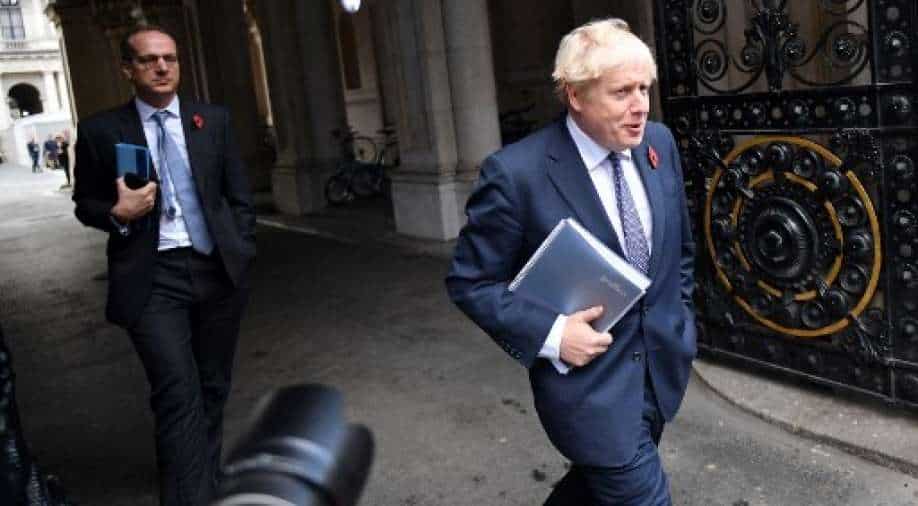 The plan envisions eight new nuclear power stations, a five-fold increase in solar and enough electricity from offshore wind to power every UK home by 2030

Britain insisted Thursday it was sticking to its climate change goals despite unveiling a new energy strategy that foresees new drilling for North Sea fossil fuels.

After weeks of cabinet infighting, the government finally released its strategy as Britons struggle with soaring energy prices following Russia's invasion of Ukraine.

The plan envisions eight new nuclear power stations, a five-fold increase in solar and enough electricity from offshore wind to power every UK home by 2030.

But to the dismay of environmentalists, the politically charged problem of onshore wind turbines -- cheaper and quicker to build than offshore -- was left on the backburner.

"This isn't an energy security strategy and will do nothing to bring down energy bills," argued Ed Matthew, campaigns director at climate change think tank E3G.

"It is a national security threat and the person who will be happiest with it is (Russian President) Vladimir Putin," he said.

But the government says the market shock from sanctions on Russia has forced a temporary reappraisal of fossil fuels, as Britons confront the worst cost-of-living crisis since the 1950s.

Business and Energy Secretary Kwasi Kwarteng denied the government had turned its back on net zero.

"Not at all," he told Sky News. "It's still in the law of the land, we're focused on that.

"But of course given what's happening around the world, given the pressure on energy prices, we're also doing lots of other things to make sure we get energy independence back into the UK," he said.

The government acknowledges that the strategy will do little to curb household energy bills in the near term, which Johnson said had "absolutely soared" after Putin's invasion of Ukraine.

But in a social media video promoting the new strategy, the prime minister stressed: "We just can't carry on like this."

He went on to visit a new nuclear plant under construction at Hinkley Point in southwest England -- which is years overdue and billions over budget.

The plan flagged a new competition to find UK manufacturers of electric heat pumps -- which are much more efficient than gas-fired household boilers, but also much more expensive.

Otherwise, as critics noted, it had nothing to say about cutting down on energy wastage and improving efficiency in homes, after the finance ministry reportedly vetoed new spending on that front.

"This strategy comprehensively fails to stand up to Putin's violence, to take the sting out of soaring energy bills, or take control of the spiralling climate crisis," said Rebecca Newsom, head of politics at Greenpeace UK.

United Nations secretary-general Antonio Guterres, marking the launch Monday of the latest UN report on climate change, said it was "moral and economic madness" to invest any more in fossil fuels.

The 3,000-page report warned that countries risk ending up with trillions in worthless assets such as offshore platforms and pipelines when demand for fossil fuels wanes in coming decades.

For the UK government, however, political pressure to tackle the energy crisis has been heating up ahead of nationwide local elections on May 5.

Also read | UK: Famous personalities with under-18-year audience to be banned from featuring in gambling ads

"And people are paying higher bills as a result," he told BBC radio.