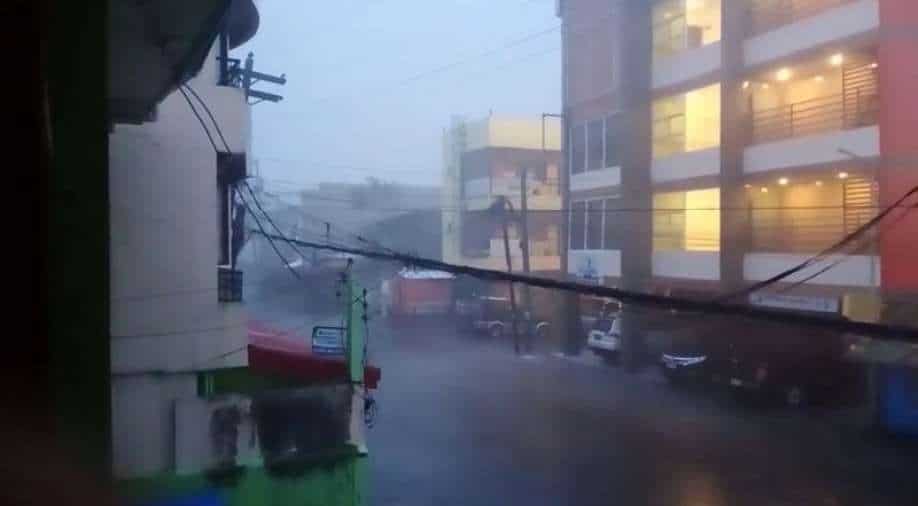 Philippine authorities evacuated nearly a million people to safer ground before Goni approached the eastern provinces and made landfall in Catanduanes and Albay in the Bicol region.

At least four people were killed as Typhoon Goni pounded the Philippines Sunday with authorities warning of "catastrophic" conditions in the hardest-hit regions where hundreds of thousands have fled their homes.

Goni was downgraded from a "super typhoon" as it swept across the southern end of the most populous island Luzon towards the capital Manila, the state weather forecaster said in its latest update.

The strongest typhoon of the year so far made landfall on Catanduanes Island before dawn with maximum sustained wind speeds of 225 kilometres (140 miles) per hour and gusts of up to 310 kilometres per hour ripping off roofs, toppling trees and triggering flash floods.

The four people included a five-year-old, Governor Alfrancis Bichara told a local radio station. Two of the victims drowned while another was swept away by volcanic mud. The fourth was killed by a falling tree.

Philippine authorities evacuated nearly a million people to safer ground before Goni approached the eastern provinces and made landfall in Catanduanes and Albay in the Bicol region.

A third landfall was expected to hit Quezon province later in the day, weather forecaster Lorie dela Cruz told a radio station. Between 19 million and 31 million people could be affected, including those in danger zones, the disaster management agency said.

Storm surge alerts have been issued, while officials have also reminded those in evacuation centres to observe social distancing as the coronavirus spread is also a concern.

Goni is the world's strongest storm so far this year, gaining further strength with 225 kph (140 miles per hour) sustained winds and gusts of up to 310 kph (190 mph).

Over the next 12 hours, "catastrophic violent winds and intense to torrential rainfall" would be experienced in the Bicol region, which covers the southern end of the main island of Luzon and Catanduanes.

Goni comes a week after Typhoon Molave hit the same region of the natural disaster-prone archipelago. That storm killed 22 people and flooded low-lying villages and farmland, before crossing the South China Sea to Vietnam.

Up to 31 million people were in Goni's path, authorities said, including in Manila where there are plans to evacuate residents from low-lying slum areas at risk of being inundated by several metre high storm surges.

Dozens of international and domestic flights have been cancelled as the civil aviation authority ordered a one-day closure of Manila's main gateway, the Ninoy Aquino International Airport.

Goni is expected to weaken as it crosses southern Luzon and enters the South China Sea late Sunday or early Monday as a typhoon, the state forecaster said.

The Philippines is hit by an average of 20 storms and typhoons every year, which typically wipe out harvests, homes and infrastructure, keeping millions of people perennially poor.

Its deadliest on record was Super Typhoon Haiyan, which unleashed giant waves on the central city of Tacloban and left more than 7,300 people dead or missing in 2013.