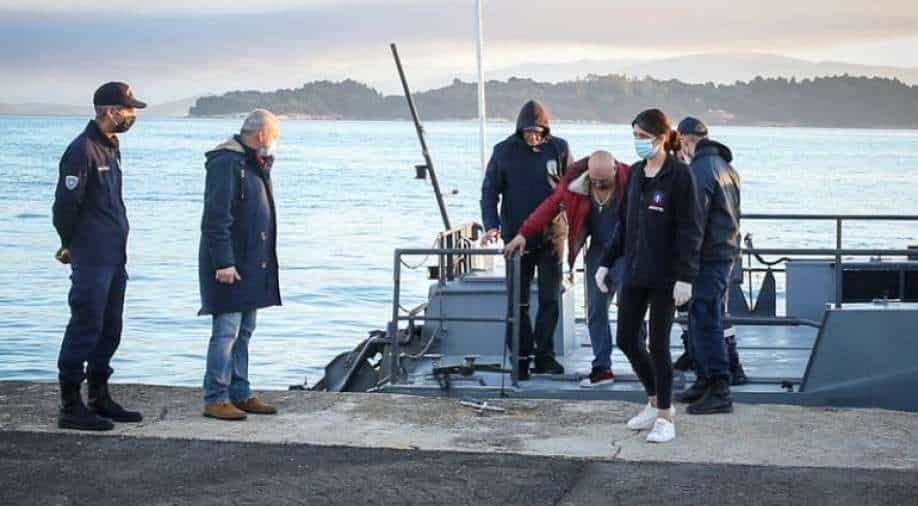 The ferry had sailed from Igoumenitsa, the largest port in western Greece, and was headed to the Italian port of Brindisi, about nine hours away. Photograph:( Reuters )

Two people are trapped on a ferry that was engulfed in a blaze as it sailed between Greece and Italy in the early hours of Friday, the Greek coastguard said, after scores of others passengers and crew members were rescued.

The coastguard said in total 239 passengers and 51 crew members had been on board the Italian-flagged Euroferry Olympia and most of them had boarded rescue vessels transferring them to the port of the island of Corfu where ambulances were waiting.

"We were woken up around 4:20 a.m. Within an hour we had left the ship ... We were saved by the crew, which acted fast," one of the passengers told Skai TV via telephone.

There were no immediate reports of deaths or severe injuries. One person with breathing problems had been taken to the hospital, according to local health authorities.

Greek media reported that at least 10 were feared missing. Authorities could not confirm the information, saying the operation was ongoing. Hours after the alarm was raised, the ship was still ablaze.

"Two people have been trapped in the garage and efforts are being made to lead them to the deck," one coastguard official said, adding that a helicopter was waiting to airlift them away.

A video uploaded on Greek news website Proto Thema showed the 183-metre (600 foot) ferry on fire and swathed in huge plumes of smoke. "May Day" was blasting from speakers.

The ferry had sailed from Igoumenitsa, the largest port in western Greece, and was headed to the Italian port of Brindisi, about nine hours away.

The fire, the cause of which was not immediately known, broke out near the island of Corfu in the Ionian Sea.

The ferry is part of the fleet of group Grimaldi Lines and has a capacity of up to 560 passengers, according to the company's website.

Grimaldi Lines spokesman Paul Kyprianou told Reuters that the cause of the fire was still under investigation but there were indications it started from the ship's hold.

"Damage is severe because despite the efforts the crew was unable to extinguish the fire," he said.

In 2014, 10 people were killed when the car ferry Norman Atlantic carrying 466 passengers and crew caught fire while sailing from Greece to Italy.