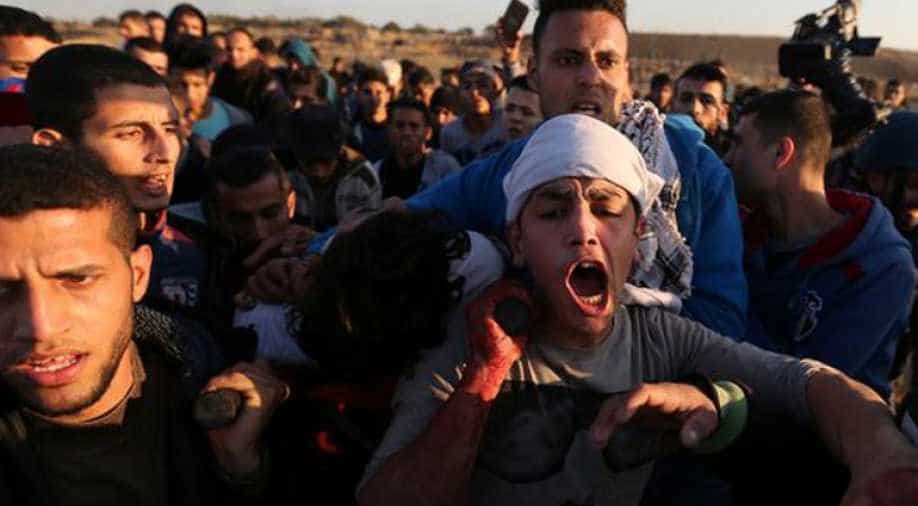 Thousands of Palestinians participated in 'violent riots' along the Gaza border and across the West Bank 'hurling firebombs and rocks and rolling burning tires' at Israeli forces, the Israeli military stated. Photograph:( ANI )

At least two Palestinians have been killed in the Gaza Strip by Israeli forces amid protests over US President Donald Trump's Jerusalem move, according to the Palestinian Ministry of Health.

According to Al Jazeera, the ministry in a statement said that two Palestinians were killed and over 70 others were injured during clashes with Israeli forces in northern Gaza near the border with Israel.

The dead men have been identified as Zakaria al-Kafarneh who died after being shot in the chest in clashes near Jabalia, in northern Gaza and Mohammed Mohaisen who died later in clashes in east of Gaza City, according to the reports.

Thousands of Palestinians participated in "violent riots" along the Gaza border and across the West Bank "hurling firebombs and rocks and rolling burning tires" at Israeli forces, the Israeli military stated.

Protesters chanted "Trump is a coward. Trump is a fool". Among the wounded one man was dressed as Santa Claus and also was holding a Palestinian flag.

This came a day after when in a major blow to the United States, 128 countries voted in favor of the United Nations General Assembly (UNGA) resolution calling on Washington DC to withdraw its unilateral recognition of Jerusalem as the capital of Israel.

President Trump reversed decades of US policy on December 6 when he recognised Jerusalem as Israel's capital.

Trump's Jerusalem move has prompted international criticism and sparked protests across the world.

Jerusalem is considered a sacred place, which is home to Jewish, Christian and Muslim holy sites.

However, it is also a disputed territory, contested by both Israel and Palestine, which sees it as a capital of its future state.