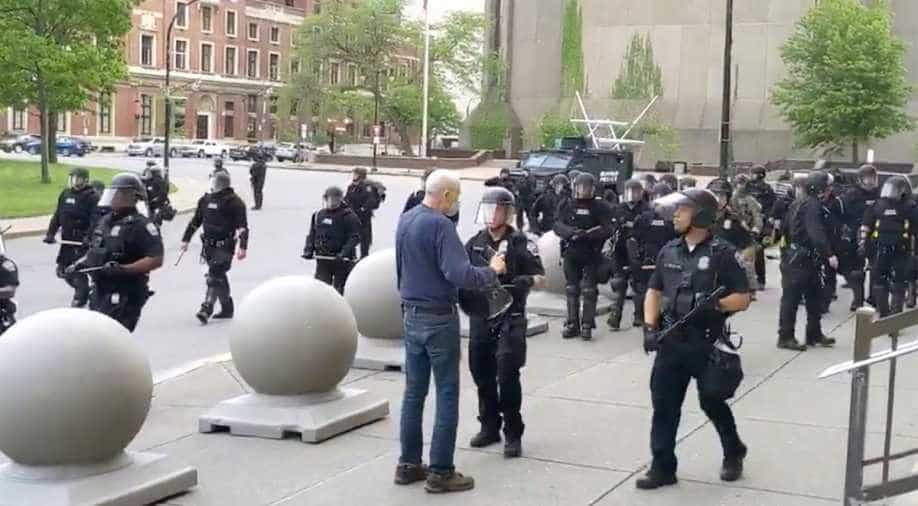 Robert McCabe and Aaron Torgalski, who surrendered on Saturday morning, pleaded not guilty to second-degree assault. They were released without bail.

Two Buffalo police officers were charged with assault, after a video showed them shoving a 75-year-old protestor in recent demonstrations over the death of George Floyd to the ground.

The demonstrators in Buffalo were, like those across the country, calling for racial justice after the killing of George Floyd in Minneapolis police custody.

Robert McCabe and Aaron Torgalski, who surrendered on Saturday morning, pleaded not guilty to second-degree assault. They were released without bail.

McCabe and Torgalski shoved the man down hard enough for him to fall backward and hit his head on the sidewalk.

The video taken by a reporter from local public radio station WBFO and posted on its website and Twitter account shows the white-haired man approaching a line of officers in riot gear. One officer pushes him with a baton and a second one with his hand. The sound of a crack is heard and then blood trickles from the man's head. The man was identified as long-time activist Martin Gugino.

The man's identity, Martin Gugino, was confirmed by Cuomo's office. Gugino is hospitalised in serious but stable condition, authorities said.

The officers had been suspended without pay. If convicted of the felony assault charge, they face up to seven years in prison.

The video of the encounter sparked outrage online as demonstrators take to cities across the country to protest racial injustice sparked by the death of George Floyd, a black man who died after a white police officer pressed a knee into his neck for several minutes.

But at least 57 Buffalo police officers who were angered over their fellow officers' suspensions stepped down from the department's crowd control unit Friday.
The resigning officers did not leave their jobs altogether.