Twitter reacts to Texans being charged upto $17,000 for electricity amid outages 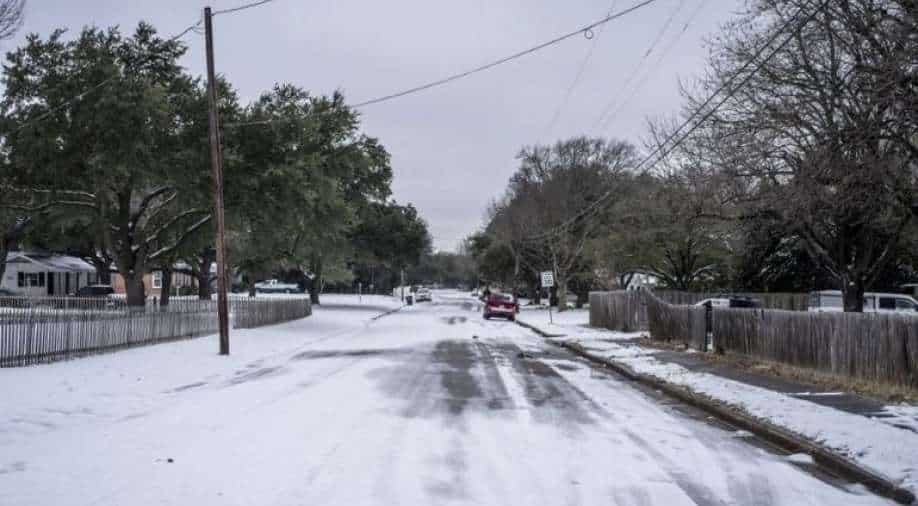 Snow covers the ground in Waco, Texas as severe winter weather conditions over the last few days has forced road closures and power outages over the state on February 17, 2021.  Photograph:( AFP )

Woes for Texans don't seem to over just yet. People in the state are now receiving exorbitant electricity bills in the aftermath of outages

The US state of Texas is currently witnessing a winter storm, knocking out electricity in most parts of the state.  Electricity returned to the state on Friday after Texans experienced almost 2,00,000 power outages over the last week.

But woes for Texans don't seem to over just yet. Turns out, people in the state are now receiving exorbitant electricity bills in the aftermath of outages. Many Texans took to Twitter to share the electricity bills they have been receiving recently. Many received bills as high as $17,000.

WFAA - a local broadcaster shared screenshots of a man named Ty Williams receiving an electricity bill for over $17,000. The man in question claims to have three electric metres in his residence, including one for his home, one for his guest house, and another for his office. Last month, the total bill he had received was $660.

Some Texas electricity customers saw the price of a kilowatt hour go from 12 cents to $9 in the past week, leading to bills in the thousands. Yikes. 😱 pic.twitter.com/r486zYn6D7

Williams told WFAA that "there is absolutely no way" for anyone to pay that much amount for electricity bills, and that "it makes no sense".

Users on Twitter are trying to understand how the bills reached such a high in such a short time. The price of a kilowatt per hour went from 12 cents to $9 in the last week, making the bills run into thousands.

According to local media reports, Williams is on a variable-rate plan with Griddy, a local electricity provider.

The company is facing a lot of criticism for its handling of the crisis, for it has reportedly trying to avoid sending such hefty bills to customers by urging them to leave and pursue a fixed-rate plan with other providers of electricity in the area.

The exorbitant amounts of bills have shocked many Texans and have left many wondering if they'd require loans to pay off the amount.

Here are a few of the reactions on Twitter:

Texas got a lot of nerve putting people in deadly situations with no electricity in freezing temps during a pandemic AND charging them hundreds & thousands more on their electric bill. pic.twitter.com/o2yutmiNsO

I really do NOT understand how the electricity bills work in #Texas. If I received a bill for $10,000 from DTE, I would have a cow! How the Hell does that even work? Are you supposed to take out a loan to pay for your electricity? #TexasBlackout pic.twitter.com/FZ9RgqiocO

Advice to anyone in Texas who has automatic debit set up for paying electricity bill.

Texas if your power not on, make sure that electricity bill reflects it!

Hey Rafael, did you receive a $10K electricity bill while you work against pandemic relief for Texas?#HoustonStrong #AmericanRescuePlan https://t.co/TkFsYRtNO9 pic.twitter.com/J5KuzrquAo

i’m still blown away that the state of texas has gone all the way texas and told america “we got our own generator” and the damn thing basically crapped out and look at em now.