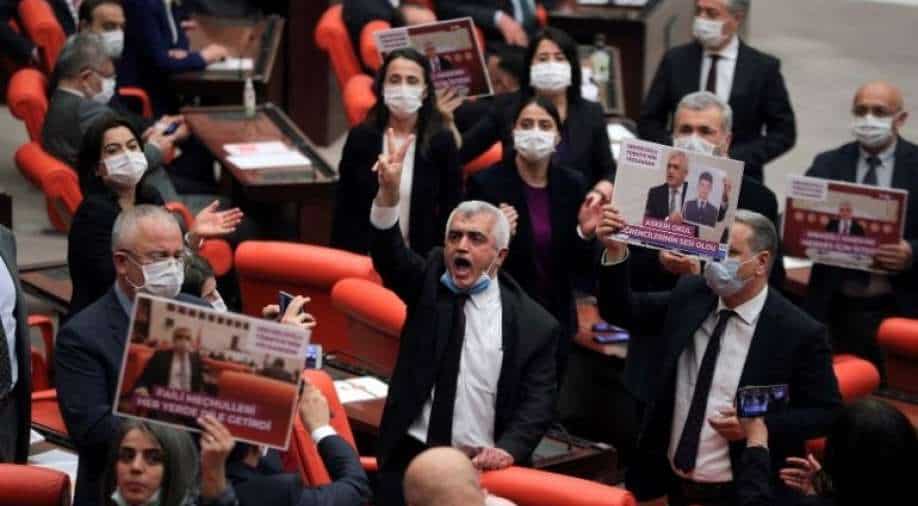 Pro-Kurdish Peoples' Democratic Party (HDP) lawmaker Omer Gergerlioglu and the other lawmakers from his party hold a protest after the Turkish Parliament stripped him of his MP status during a session at the parliament in Ankara, Turkey Photograph:( Reuters )

The move against Omer Faruk Gergerlioglu, a human rights advocate, dealt a new blow to the Peoples' Democratic Party (HDP) which nationalist allies of President Tayyip Erdogan's AK Party (AKP) want to be banned over what they say are militant links

Turkey's parliament increased pressure on a pro-Kurdish opposition party on Wednesday by stripping a prominent member of his seat over a criminal conviction for spreading "terrorist propaganda" in a social media post.

The move against Omer Faruk Gergerlioglu, a human rights advocate, dealt a new blow to the Peoples' Democratic Party (HDP) which nationalist allies of President Tayyip Erdogan's AK Party (AKP) want to be banned over what they say are militant links.

Gergerlioglu was the latest among many HDP lawmakers, mayors and officials jailed or forced out in recent years, and is one of many government critics to have expressed concern about an erosion of human rights in Turkey.

He said he would resist the decision and HDP deputies held up placards in parliament supporting him. They chanted "rights, law, justice" and "putschist AKP".

"Enough of so many anti-democratic practices. We will not bow down," Gergerlioglu shouted, adding that the will of the people had been "trampled underfoot".

Turkey's top appeals court last month upheld his 2018 conviction for "spreading terrorist propaganda" over a post he shared in 2016 before he was elected an MP in the northwestern province of Kocaeli.

He had shared and commented on a story that reported on an outlawed Kurdish militant group calling on the Turkish state to take a step towards peace.

Kurdish militias have been waging an insurgency against the Turkish state since 1984 that has claimed tens of thousands of lives.

Gergerlioglu, who will now see his immunity from prosecution lifted, defiantly declared in parliament that he will have to be forcibly removed from the chamber.

"I came here to parliament representing the people's will," said Gergerlioglu, who is also a physician, accusing the parliament of committing a "crime" against him.

"I'm not going anywhere," he shouted, calling the decision "unconstitutional".

Gergerlioglu was supported by fellow HDP MPs, some of whom applauded Gergerlioglu and banged on tables in the general assembly while chanting "rights, law, justice".

#GergerliogluYalnizDegildir (Gergerlioglu is not alone) has become a top topic on Turkish Twitter, even though the HDP's sit-in protest was largely ignored by the main television stations.

Meral Danis Bestas, who co-chairs the party's parliamentary group, said Gergerlioglu was the 14th HDP lawmakers to have been stripped of his immunity since 2016.

"You cannot do as you please with MPs elected by the people," her fellow co-chair Saruhan Oluc told reporters.

Human Rights Watch (HRW) noted that Gergerlioglu's offending posts never promoted violence and that he was stripped of his seat before the Constitutional Court had a chance to review his appeal.

HRW's Turkey director Emma Sinclair-Webb called it "a shocking attack on democratic norms and the rule of law, a violation of Turkey's constitution, laws and obligations under international law."

Although he has long been an irritant for Erdogan, his advocacy for female detainees subjected to strip searches particularly angered the government last year.

The debate intensified after a public backlash against Zengin's comments in which he claimed that "honourable" women would not wait months or years to report such experiences.

Erdogan has announced a plan to strengthen rights to a fair trial and freedom of expression in Turkey, but has failed to appease his critics.

Pressure on the HDP has grown since Turkey said 13 captives, including Turkish military and police personnel, were executed by PKK militants in Iraq during a failed Turkish military operation to rescue them last month.

The PKK has fought an insurgency against the state in mainly Kurdish southeast Turkey since 1984. More than 40,000 people have been killed in the conflict.