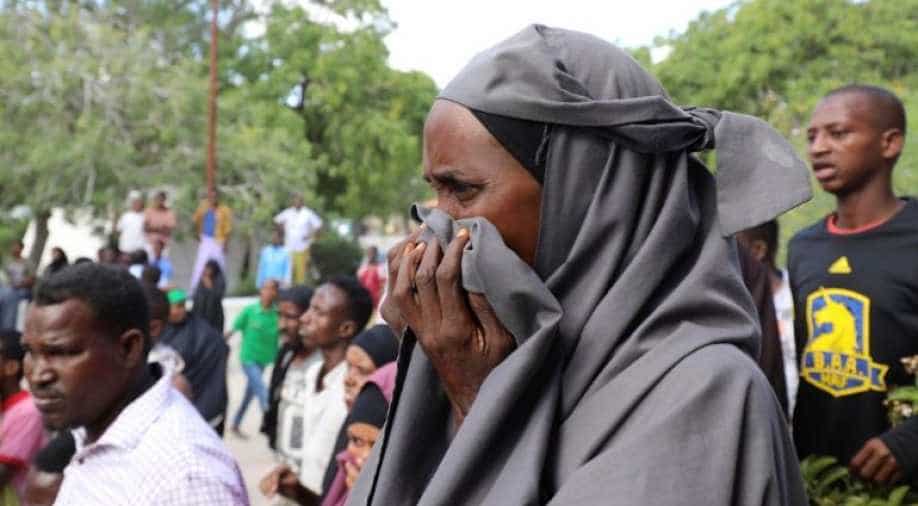 A Somali woman reacts at the scene of a car bomb explosion at a checkpoint in Mogadishu, Somalia December 28, 2019. Photograph:( Reuters )

The aircraft also brought doctors to help treat the some 125 people injured in Saturday's blast, which happened when a vehicle packed with explosives detonated at a busy security checkpoint.

A Turkish military plane on Sunday evacuated 16 gravely wounded victims of a devastating bombing that killed 79 people and overwhelmed local health services, in the latest attack on a city dogged by insecurity.

The aircraft also brought doctors to help treat the some 125 people injured in Saturday's blast, which happened when a vehicle packed with explosives detonated at a busy security checkpoint.

"The rescue mission continues since yesterday when the blast occurred and after long and diligent efforts, we have managed to evacuate 16 of the wounded people to Turkey for further medical treatment," Mogadishu mayor Omar Mohamed Mohamud told reporters at the airport.

No group has claimed the bloody attack, however President Mohamed Abdullahi Farmaajo has blamed Islamist group Al-Shabaab, which regularly carries out car bombings and other attacks on the capital, in their decade-long bid to topple the internationally-backed government.

Saturday's bombing was the deadliest since truck exploded in 2017 near a fuel tanker, creating a fireball that killed over 500 people.

Farmaajo pinned the attack on the "terrorist organisation Al-Shabaab" in a televised message and slammed it as an attempt to "intimidate and terrorise the Somali public and to massacre them at every opportunity available".

At least 16 of those killed were students from the capital's private Banadir University, who had been travelling on a bus when the car bomb detonated at a busy intersection southwest of the Somali capital.

The director of the private Aamin Ambulance service, Abdukadir Abdirahman Haji, told AFP around 125 people were injured, a number which has overwhelmed health services in the capital.

Somali police chief Abdi Hassan Mohamed said Saturday that 79 had died, but the toll could increase.

"There are still rescue operations going on to assist those who have been massacred by the terrorists while going about their business," Somalia's Information Minister Mohamed Abdi Heyr told journalists.

"We have received this morning doctors and medicine sent by the Turkish government and we are working to separate people seriously wounded from others in order to send them outside the country and the rest will be treated by the doctors," he added.

The minister said about 24 doctors specialising in trauma had arrived from Turkey -- a key ally of Somalia.

Somalia's Security Minister Mohamed Abukar Islow who held a press conference alongside the mayor at the airport said some of the doctors from Turkey would stay to treat people in the country.

"There are doctors from Turkey some of them went back with the plane but others will remain here preferably to treat people here, our Qatari brothers will also send another plane which will evacuate some more people who are seriously wounded as well," he said.

Dozens of ambulances carried wounded people from various hospitals in the city to the Turkish-run Recep Tayyip Erdogan Hospital from where they were taken to the airport.

Abdukadir Moalim, a Mogadishu resident, said his family was feeling desperate because his cousin had sustained serious head wounds in the blast.

"The problem with the blast is that even if you escape death, you can sustain life-threatening injuries like my cousin, who has injuries in the head and medical doctors here could not treat him inside the country," he said.

"Thank God, he will be taken to Turkey now and we are expecting that with time he gets well."

Two Turkish citizens were killed in the blast and according to medical sources, another two who were wounded will be among those airlifted home.

Since 2015, there have been 13 attacks in Somalia with death tolls above 20. Eleven of these have been in Mogadishu, according to a tally of AFP figures. All of them involved car bombs.