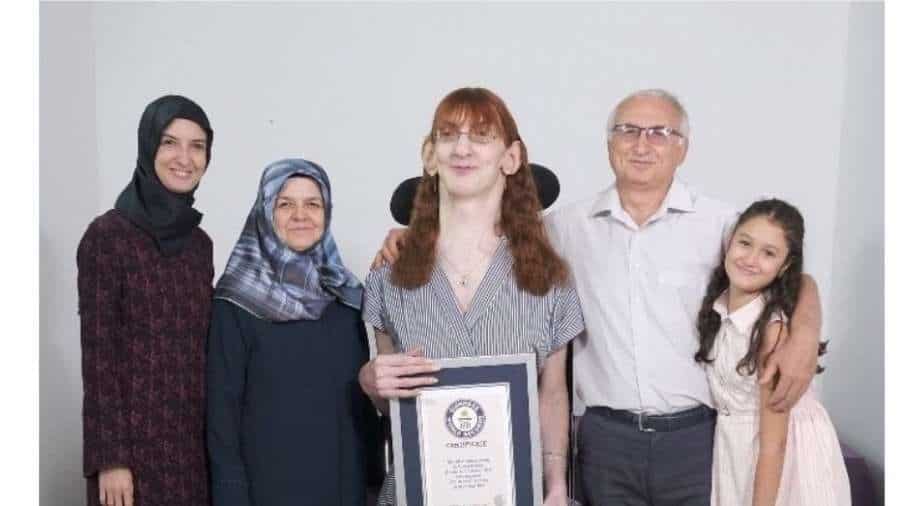 The record-breaker suffers from Weaver syndrome, which is an extremely rare condition that causes accelerated growth amongst other abnormalities including skeletal maturation

Rumeysa Gelgi from Turkey becomes the tallest living woman in the world with a height of 215.16cm (7ft 0.7in). Rumeysa was re-measured this year after she was first awarded the title for the tallest teenager living (female) back in 2014 when she was aged 18.

The record-breaker suffers from Weaver syndrome, which is an extremely rare condition that causes accelerated growth amongst other abnormalities including skeletal maturation.

Rumeysa mostly uses a wheelchair but can move for short periods using a walker.

She thinks that it is important to educate others about rare medical conditions such as her own. She says that her height makes people intrigued when they pass her on the street.

However, most people are kind and supportive when they meet her for the first time.

"Every disadvantage can be turned into an advantage for yourself so accept yourself for who you are, be aware of your potential and do your best," she says.

In her free time, she likes to go out for nice meals with her family and swimming really helps her to relax.

ICYMI: Rumeysa Gelgi was confirmed as the world's tallest woman at just over 7 feet 👇

Her family is very happy and proud of her for having the Guinness World Records title.

Also read | From 'explosive sex' to dome home: Winners of the wildlife photographer of the year

Craig Glenday, Editor-in-Chief, Guinness World Records, while speaking about this record, said, "It's an honour to welcome Rumeysa back into the record books. Her indomitable spirit and pride at standing out from the crowd is an inspiration. The category of tallest living woman is not one that changes hands very often, so I'm excited to share this news with the world."