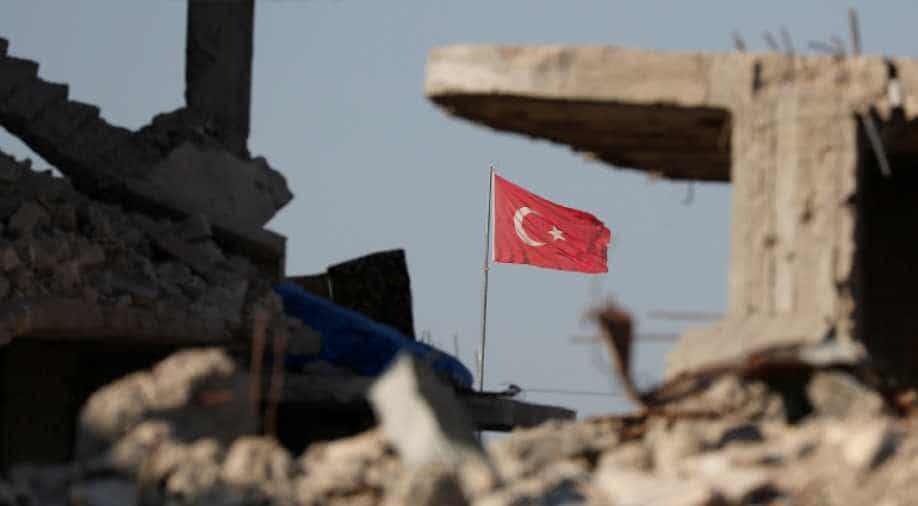 Turkey vowed on Monday that the fight against Islamic State would not be slowed by the US withdrawal from Syria, where Ankara-backed rebels reinforced their positions around the potential flashpoint town of Manbij.

Turkey vowed on Monday that the fight against Islamic State would not be slowed by the US withdrawal from Syria, where Ankara-backed rebels reinforced their positions around the potential flashpoint town of Manbij.

"As part of the global coalition to defeat ISIS, we would like to express again that we will not allow such a thing to happen on Syrian soil, Iraqi soil or Turkish soil," Kalin told a news conference.

He added that there would be no disruption or slowdown of the fight against the militant group.

Erdogan and Trump agreed in a phone call on Sunday to establish military and diplomatic coordination to prevent a power vacuum from developing as the United States withdraws.

A committee of US military officials will visit Turkey this week to discuss the details of the pullout with their counterparts, Kalin said, adding that Turkey would also increase coordination with Russia in Syria.

In Washington, Pentagon spokeswoman Heather Babb confirmed there would be meetings in Turkey this week. She said the two countries were "coordinating actively on all issues affecting both Turkish security and the situation in Northeast Syria," but declined to give details of the discussions.

Russia supports Syrian President Bashar al-Assad, while Turkey has backed rebels fighting against him. The two countries reached an agreement in September to create a demilitarised zone in the Idlib region, the last major rebel stronghold.

Trump's abrupt decision to pull troops out of Syria has upended American policy in the region. It will also effectively hand the fight against Islamic State in Syria to Turkey and set Ankara up to broaden its push against the Syrian Kurdish YPG.

Differences over Syria have long been a source of tension between the United States and Turkey. Washington has backed the YPG in the fight against Islamic State, but Ankara sees the militia as a terrorist organisation.

A rebel spokesman said on Monday Turkish-backed Syrian forces had reinforced the area around the town of Manbij, occupied by the Kurdish fighters, in preparation for the US withdrawal.

"Yesterday units from the (rebel) Syrian National Army headed towards the Manbij front and took preliminary positions (in preparation) for the battle," said Major Youssef Hamoud, the spokesman for the National Army.

US forces are still in Manbij and the Turkish-backed fighters will not advance until they withdraw, Hamoud told Reuters.

In June, Ankara and Washington reached an agreement that would see the YPG ousted from the town, but Turkey has repeatedly blamed the United States for what it says has been a delay in that deal.

Erdogan said earlier this month that Turkish forces would enter the town unless the United States removed the Kurdish fighters.

Outgoing US Defense Secretary James Mattis has signed the order for the withdrawal of the US forces from Syria, the US Defense Department said on Monday.

The withdrawal is seen as possibly beginning within weeks.

"Americans have uttered numbers such as 30-60 days, 60-100 days. We will see about that," Kalin said on Monday. "This will have more to do with the coordination of the withdrawal process in the field."