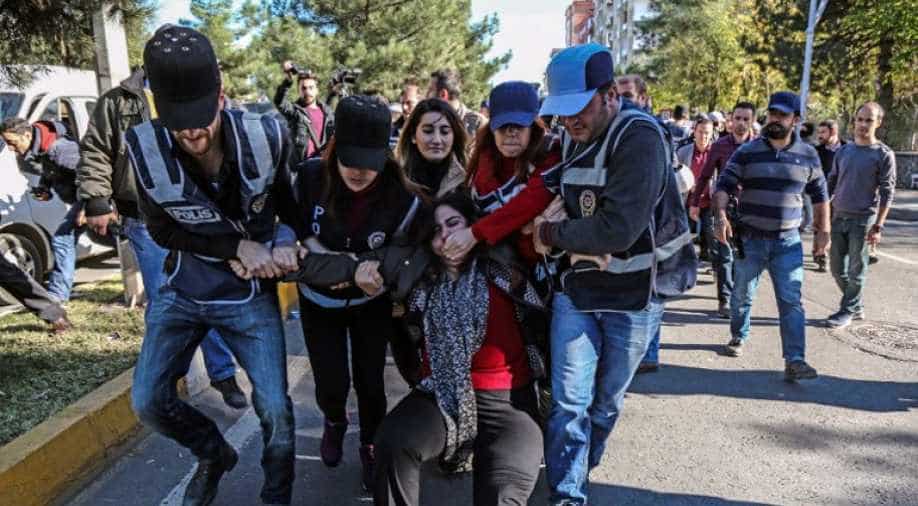 Turkey carried out an unprecedented crackdown against members of the Peoples' Democratic Party. Photograph:( AFP )

Turkey's clampdown against leading Kurds ended with the with the formal arrest of the two party co-leaders of the pro-Kurdish Peoples' Democratic Party (HDP) and five of the party's MPs, state-run Anadolu news agency said.

Party leaders Selahattin Demirtas and Figen Yuksekdag, who were detained overnight as part of a terror investigation, were remanded in custody by a court in the southeastern city of Diyarbakir, the centre of the country's Kurdish minority.

Demitras has been charged with "membership of an armed group", a reference to the PKK, while Yuksekdag is charged with making "terror propoganda" for the group, Abadolu reports.

They will be held behind bars pending trial, although no date has been set yet, AFP reported.

Soon after the party leaders were detained, a blast occurred outside a police building in Diyarbakir, killing eight people and wounding over 100. Turkey's Prime Minister Binali Yildirim held the outlawed Kurdistan Workers Party (PKK) for the explosion, AFP reported.

A total of 12 HDP parliamentarians were rounded up overnight, sparking international alarm.

Apart from Demirtas and Yuksekdag, five other MPs were also remanded in custody following hearings in Diyarbakir and in other cities.

Court hearings for two others, Ferhat Encu and Abdullah Zeydan, are ongoing.

Their detention appeared part of a large-scale operation against the HDP, which is the third-largest party in the Turkish parliament with 59 seats and the main political representative of the Kurdish minority.

The two leaders are accused of spreading propaganda for the outlawed Kurdistan Workers Party (PKK). Demirtas is also accused of provoking violence in deadly protests in October 2014, AFP reported.

The crackdown against pro-Kurdish politicians has intensified after a failed coup in July. Critics say it has gone well beyond targeting the actual coup plotters, AFP reports. The government has since stepped up its offensive against the Turkish security forces and staged regular attacks that have claimed hundreds of lives of military and police personnel.

Tensions have increased in the Kurdish-dominated southeast after the collapse of a fragile ceasefire declared by the PKK collapsed in 2015.