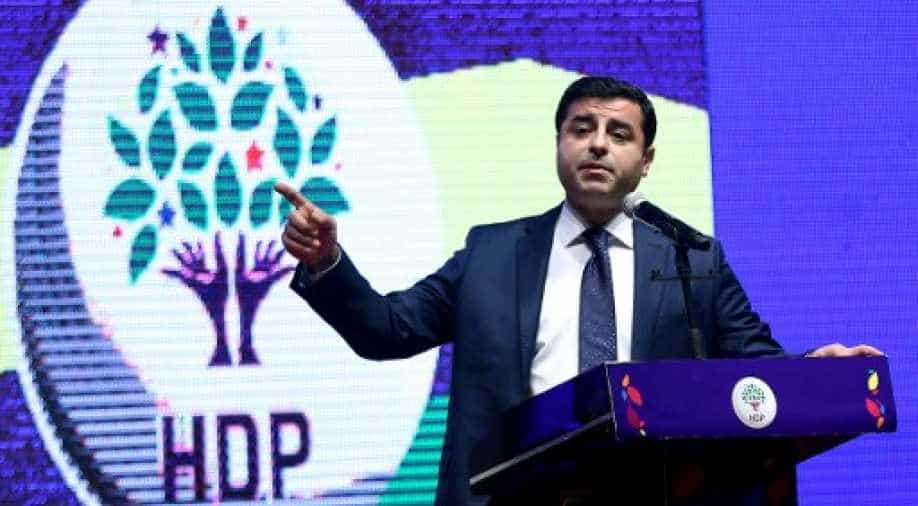 Turkish police on Friday detained the two co-leaders of the country's main pro-Kurdish party, the Peoples' Democratic Party (HDP), and several other MPs in a major escalation of the crackdown in the wake of a failed July 15 coup.

Selahattin Demirtas was detained at his home in the southeastern city of Diyarbakir while the co-chairperson Figen Yuksekdag was held in Ankara as part of a terror investigation, the state-run Anadolu news agency said.

Their detention appeared part of a large-scale operation against the HDP, which is the third largest party in the Turkish parliament with 59 seats and the main political representative of the Kurdish minority.

Demirtas and Yuksekdag had been targeted by several separate probes over the last months but this is the first time that either has been detained.

The security operations took place after midnight, with Demirtas tweeting at 0130 local time (2230 GMT) that police had arrived at his home and he was about to be detained.

NTV television said the pair were accused of spreading propaganda for the outlawed Kurdistan Workers Party (PKK) while Anadolu said Demirtas was accused of provoking violence in deadly protests in October 2014.

Those detained also failed to respond to demands to give statements to prosecutors, Anadolu said.

According to the Turkish interior ministry, a total of 11 HDP MPs were detained, including the two co-leaders, NTV said.

Coordinated raids took place throughout the southeast of Turkey including the cities of Diyarbakir, Van and Bingol.

A police search was also in progress at the party's general headquarters in Ankara.

Those detained including the prominent lawmaker Sirri Surreya Onder, who in the past has been a pointman for contacts with jailed PKK leader Abdullah Ocalan.

The head of the HDP's faction in the Turkish parliament, Idris Baluken, was also held.

Their detention followed a previous resolution by parliament allowing the immunity of MPs to be lifted.

Two more wanted HDP MPs — Faysal Sariyildiz and Tugba Hezer Ozturk — were found to be abroad while efforts were still under way to detain two others, Imam Tascier and Nihat Akdogan, Anadolu said.

The raids come as Turkey remains under a state of emergency imposed in the wake of the July 15 failed coup, which critics say has gone well beyond targeting the actual coup plotters.

Thirteen staff from the opposition Cumhuriyet newspaper, including the editor-in-chief, were detained on Monday, further heightening strains in Turkish society.

Tensions have surged in the Kurdish-dominated southeast of Turkey since a fragile ceasefire declared by the PKK collapsed in 2015.

It has since stepped up its insurgency against the Turkish security forces, staging regular attacks that have claimed hundreds of lives among the military and the police.

The charisma in particular of Demirtas — dubbed the "Kurdish Obama" by some admirers after the US president — earned it success at the ballot box.

It also divides all its top jobs between a man and a woman, as with the party chairmanship, which is shared between Demirtas and Yuksekdag.

But the authorities accuse the party of being a front for the PKK and failing to distance itself from terror, claims it has always vehemently denied.

President Recep Tayyip Erdogan has launched repeated personal attacks on Demirtas, who analysts have seen as the sole politician in Turkey who comes anywhere near to rivalling his charisma.

Demirtas has made it a personal crusade to oppose Erdogan's plan for a presidential system in Turkey, which the HDP says would lead to dictatorship.

Erdogan had earlier Thursday held talks with Devlet Bahceli, the head of the fourth largest party in parliament, the Nationalist Movement Party (MHP), which despises the HDP and whose votes could be crucial in agreeing a presidential system.

The HDP strongly opposed the coup that aimed to unseat Erdogan but Demirtas told AFP in an interview after the putsch bid there was no contradiction in resisting both the plotters and the president.