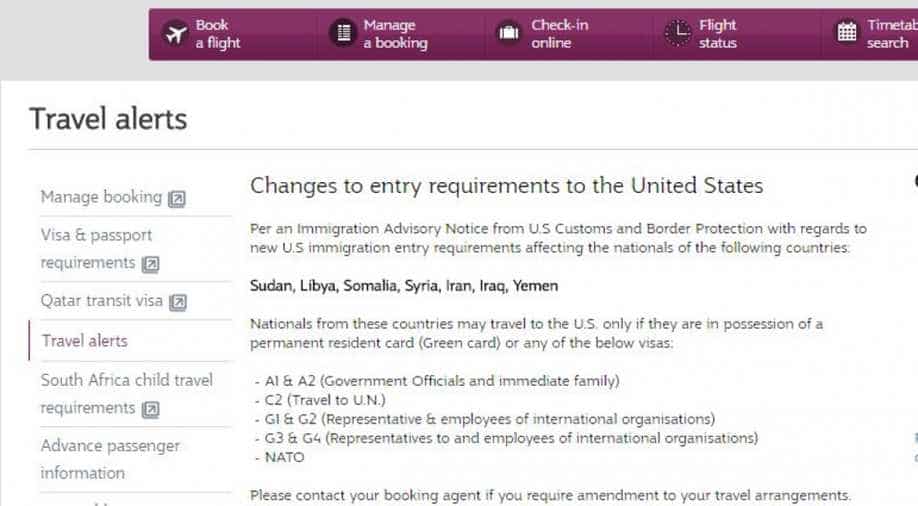 The US immigration notice was published on the website of Qatar Airways. Photograph:( WION )

Qatar Airways has published on its the website stating that nationals from Sudan, Libya, Somalia, Syria, Iran, Iraq, and Yemen may travel to the US only if they are in possession of a permanent resident card (Green card) or a diplomatic visa. The move by Qatar Airways comes after President Trump signed a sweeping executive order on Friday to suspend refugee arrivals and impose tough controls on travellers from the seven countries.

The documents required from travellers include:

The airline, which flies to at least 15 American cities, also posted a "travel alert" online on Saturday, listing the paperwork required by citizens of the seven countries.

A spokesperson for the Gulf carrier said it would only carry passengers to the US who had the correct documentation.

"We are enforcing the new rules," said the official. "If travellers to the US don't have the proper documentation, we are not going to take them to the US," the airways added.

Qatar Airways destinations in the US include New York, Atlanta and Chicago.

Meanwhile, five Iraqi passengers and one Yemeni were barred from boarding an Egypt Air flight from Cairo to New York on Saturday after President Donald Trump halted the entry of citizens from seven Muslim-majority countries, sources told Reuters at Cairo airport.

The passengers, arriving in transit to Cairo airport, were stopped and redirected to flights headed to their home countries despite holding valid visas, the sources said.

Trump on Friday put a four-month hold on allowing refugees into the United States and temporarily barred travellers from Syria and six other Muslim-majority countries, saying the moves would help protect Americans from terrorist attacks.

He said his most sweeping use of his presidential powers since taking office a week ago, barring travellers from the seven nations for at least 90 days, would give his administration time to develop more stringent screening procedures for refugees, immigrants and visitors.

"I'm establishing new vetting measures to keep radical Islamic terrorists out of the United States of America. Don't want them here," Trump said earlier at the Pentagon. "We only want to admit those into our country who will support our country and love deeply our people," he said.

The bans, though temporary, took effect immediately, causing havoc and confusion for would-be travellers with passports from Iran, Iraq, Libya, Somalia, Sudan, Syria and Yemen. Besides Cairo, it was not immediately clear whether other airports of countries listed by Trump had swiftly implemented the ban. Arab officials of the listed countries would not comment on the matter.

The order seeks to prioritise refugees fleeing religious persecution, a move Trump separately said was aimed at helping Christians in Syria. That led some legal experts to question whether the order was constitutional. One group said it would announce a court challenge on Monday. The Council on American-Islamic Relations said the order targets Muslims because of their faith, contravening the US Constitutional right to freedom of religion.

"President Trump has cloaked what is a discriminatory ban against nationals of Muslim countries under the banner of national security," Greg Chen of the American Immigration Lawyers Association told Reuters.

The newly inaugurated US president signed a sweeping executive order on Friday to suspend refugee arrivals and impose tough controls on travellers from the seven countries.

Trump has long pledged to take this kind of action, making it a prominent feature of his campaign for the November 8 election. But people who work with Muslim immigrants and refugees were scrambling to determine the scope of the order.

Even legal permanent residents - people with "green cards" allowing them to live and work in the United States - were being advised to consult immigration lawyers before travelling outside the country, or trying to return, according to Muslim Advocates, a civil rights group in Washington.

On Friday evening, Abed Ayoub of the American-Arab Anti-Discrimination Committee said he had fielded about 100 queries from people anxious about the order, which he said he believed could affect travelling green card holders, students, people coming to the United States for medical care and others.

During his campaign, Trump tapped into American fears about Islamic State militants and the flood of migrants into Europe from Syria's civil war, saying refugees could be a "Trojan horse" that allowed attackers to enter the United States. In December 2015, he called for a ban on all Muslims entering the United States, drawing fire for suggesting a religious test for immigrants that critics said would violate the U.S. Constitution.

His idea later evolved into a proposal for "extreme vetting." Trump's order also suspends the Syrian refugee program until further notice, and will eventually give priority to minority religious groups fleeing persecution. Trump said in an interview with the Christian Broadcasting Network that the exception would help Syrian Christians fleeing the civil war there.

Legal experts were divided on whether this order would be constitutional. "If they are thinking about an exception for Christians, in almost any other legal context discriminating in favour of one religion and against another religion could violate the constitution," said Stephen Legomsky, a former chief counsel at US Citizenship and Immigration Services in the Obama administration.

Democrats were quick to condemn Trump's order as un-American, saying it would tarnish the reputation of the United States as a land that welcomes immigrants. "Today's executive order from President Trump is more about extreme xenophobia than extreme vetting," said Democratic Senator Edward Markey in a statement.

Some Republicans praised the move. Representative Bob Goodlatte, chairman of the House of Representatives Judiciary Committee, said Islamic State has threatened to use the US immigration system, making it important to do more screening.

"I am pleased that President Trump is using the tools granted to him by Congress and the power granted by the Constitution to help keep America safe and ensure we know who is entering the United States," Goodlatte said in a statement.

Without naming Trump, Iranian President Hassan Rouhani said on Saturday it was no time to build walls between nations and criticised steps towards cancelling world trade agreements. Trump had ordered the construction of a US-Mexican border wall, a major promise during his election campaign, as part of a package of measures to curb illegal immigration.