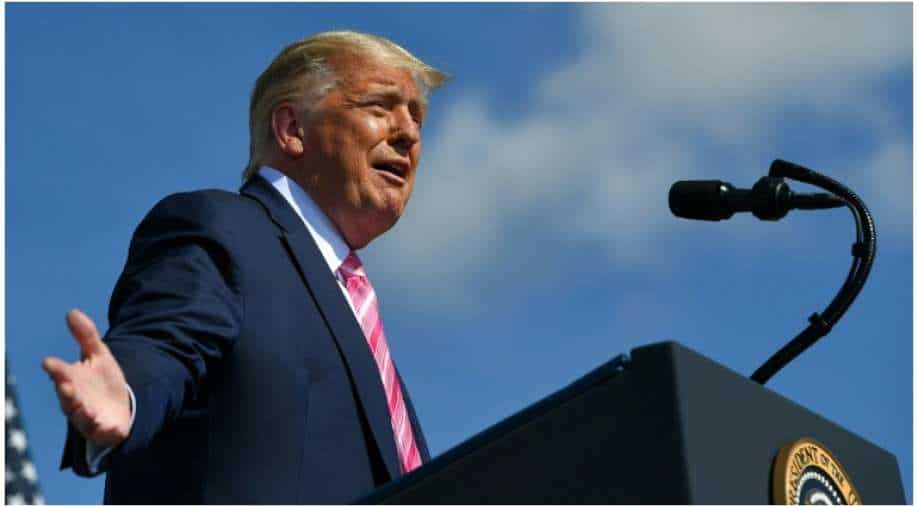 Immigration has not been a central theme of the race between Trump and former Vice President Joe Biden, the Democratic nominee, but the future of some of the president’s hard-line policies at the border will be determined by the results

McALLEN, Texas — The leadership of the Department of Homeland Security gathered Thursday under the shadow of 30-foot, black-painted, steel bollards to promote the near completion of 400 miles of President Donald Trump’s border wall.

The politics of the moment, five days before the election, was lost on no one.

“The only reason we haven’t reached another crisis is because of the policies and procedures this administration put into place over the last several years, including the construction of an effective border wall system,” Chad Wolf, the acting homeland security secretary, told reporters, photographers and cameramen. “Abolishing these measures or reversing course is absolutely no way forward.”

Immigration has not been a central theme of the race between Trump and former Vice President Joe Biden, the Democratic nominee, but the future of some of the president’s hard-line policies at the border will be determined by the results.

The Homeland Security Department has been racing to deliver on Trump’s promise of 450 miles of border wall before the end of the year. The agency is still about a week away from the 400-mile marker, according to Customs and Border Protection officials, and nearly all of the construction has been in areas where dilapidated fencing or vehicle barriers already stood.

But the steel structure on the border, built without congressional approval, is something of a monument to the president’s determination. It has affected the environment, private property owners and, Homeland Security officials say, the job of border agents.

Department leaders in recent days have traversed the nation, including in battleground states, to emphasize routine arrests by Immigration and Customs Enforcement, criticize Democrats and blast so-called sanctuary city policies. The agency has also erected billboards in Pennsylvania to warn of the dangers posed by immigrants without legal status.

All of that has amplified criticism that the department has become an arm of the Trump campaign.

“There are partisan politics behind it, not operational reasons,” said David Lapan, a former spokesman for the Homeland Security and Defense departments under Trump. “Over the time of the Trump administration, DHS has been seen as more and more politicized.”

The nonprofit government watchdog American Oversight requested that the Homeland Security Department’s inspector general investigate whether the senior leadership had violated the Hatch Act, which prohibits federal employees from engaging in political activities on the job.

Standing in front of a line of Border Patrol agents, Wolf dismissed the criticism and defended policies that have effectively halted migration across the southwest border, leaving families in squalid tent camps in some of the most dangerous areas in Mexico.

The Homeland Security officials also attacked the policy proposals of Biden, who has pledged to halt wall construction and end the Remain in Mexico program that has forced tens of thousands of migrants to wait in Mexico for court hearings on asylum claims.

Mark Morgan, the acting commissioner of U.S. Customs and Border Protection, said Biden’s policies would prompt a migrant “invasion,” although he acknowledged in a separate interview that most migrants who crossed the border last year were not criminals but rather Central American families fleeing poverty.

Asked in an interview whether his language could incite violence, Morgan responded defensively.

“That’s what people immediately want to go to, is that we’re being xenophobic, we’re racist, right?” he said, adding: “I have no problem saying that the overwhelming majority of those trying to illegally enter the United States are not bad people, right? But some are. So my question is, how many?”

Most illegal crossings into the United States in recent years have been in the Rio Grande Valley in Texas, but only 7 miles of the wall have been constructed in the area.

Private landowners in South Texas say the wall will cut through their properties; they have forced the Trump administration to go through the arduous process of asserting eminent domain in court. To make good on Trump’s promised 450 miles, the administration has concentrated construction in areas owned by the federal government, over terrain that already impedes border crossers.

Chief Rodney Scott of Border Patrol conceded that the Rio Grande Valley “was higher priority for the U.S. Border Patrol.” But, he added, “we elected to go ahead and shift down to a lower priority because I could make a difference there and then.”

That approach has damaged ecosystems and disrupted the migration of endangered wildlife, said Laiken Jordahl, a borderlands campaigner at the Center for Biological Diversity.

“This 400-mile celebration is not insignificant,” he said. “This is something communities and Indigenous nations across the borderlands are mourning. This marks 400 miles of destruction.”

The Trump administration has secured about $15 billion to build 731 miles of border wall, with much of the money transferred from the Defense Department and funds that had been appropriated by Congress for military construction projects and narcotics interdiction.

With the president’s deadline nearing, the government has stepped up litigation against landowners in South Texas. It has filed 106 lawsuits against landowners this year to survey, seize and potentially begin construction, an increase from 27 lawsuits filed in 2019, said Ricky Garza, a staff lawyer for the Texas Civil Rights Project. The federal government filed 22 cases in September alone.

“This is an attack on our culture, our heritage, our very identity, and that is why we are fighting,” said Melissa Cigarroa, a landowner who said the government had threatened to sue her for access to her property in Zapata County, Texas. “We feel it viscerally.”

Homeland Security officials say the border wall is critical. It has allowed the agency to funnel migration into specific areas, where they can strategically place Border Patrol agents to apprehend migrants. They say it has freed those agents to make more arrests rather than respond to families seeking protection.

This month, the agency is expected to record the highest monthly total of illegal crossings for the year, Wolf said. But the blockade on asylum came not from a wall of steel but a web of policy changes, especially the Remain in Mexico policy, which has forced more than 60,000 migrants back to Mexico to await court dates to have their asylum claims assessed.

The department has also used a public health emergency declaration to rapidly return migrants, including unaccompanied children, to Mexico or their home countries without providing chances to have their asylum claims heard.

While the department has said the rule has prevented the spread of disease in the United States, immigration lawyers say it conflicts with immigration laws that say migrants must have a chance to have their fear of persecution in their home countries heard when they step on U.S. soil.

“There are times when someone’s want and need to claim asylum is superseded by something of far greater value,” he said, “and that’s lives of American citizens.”

He added that migrants were still provided the opportunity to have fear of torture assessed by an immigration officer, although that screening carries a much higher bar than screenings for persecution.

Morgan said the Mexican government had not verified reports of widespread violence against migrants in Mexico. But immigration advocacy organizations have recorded hundreds of attacks against those forced by the United States to return to Mexico, with some disseminating recordings of extortion attempts by cartels.

“They’re intentionally leaving the sheltered environment, re-engaging the smuggling organizations, even when they’ve been told not to, to try to get illegally in the United States,” he said. “That’s when they’re exposing themselves.”