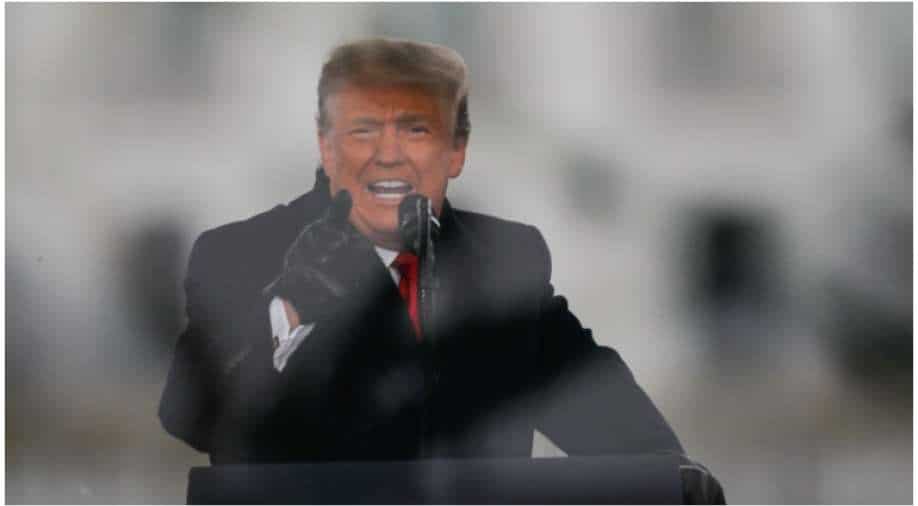 U.S. President Donald Trump gestures as he speaks during a rally to contest the certification of the 2020 U.S. presidential election results by the U.S. Congress, in Washington, U.S, January 6, 2021. Photograph:( AFP )

The defence team is expected to take "three to four hours" on Friday to lay out its arguments against convicting Trump for inciting the January 6 riot, which sent lawmakers scrambling for safety and resulted in the deaths of five people, including a police officer.

Donald Trump's impeachment trial will continue on Friday with defence lawyers making their case on Friday why the former president is not guilty of inciting last month's deadly riot at the US Capitol.

The Senate is, meanwhile, racing toward a final vote in his impeachment trial as soon as Saturday.

The defence team is expected to take "three to four hours" on Friday to lay out its arguments against convicting Trump for inciting the January 6 riot, which sent lawmakers scrambling for safety and resulted in the deaths of five people, including a police officer.

Democratic prosecutors on Thursday wrapped up two days of arguments for Trump's conviction, saying the Republican knew what would happen when he exhorted supporters to march on the Capitol and that he should be held accountable. Congress had gathered that very day to certify Democrat Joe Biden's election win.

In their arguments, the Democratic prosecutors provided numerous examples of Trump's actions prior to the rampage to illustrate what he intended when he told supporters to go to the Capitol and "fight like hell" as lawmakers convened for the election certification.

The Democratic-controlled House of Representatives charged Trump on January 13 with inciting the insurrection, but Democrats are unlikely to gain a Senate conviction and bar Trump from running for office again.

Conviction requires a two-thirds majority in the 100-member Senate, which means at least 17 Republicans would have to defy Trump despite his continued popularity among Republican voters.

Trump falsely claimed his November 3 election loss was the result of widespread fraud.

Trump is the first US president to be impeached twice and the first to face trial after leaving office. His first impeachment trial, which stemmed from his efforts to pressure Ukraine to investigate Biden, ended in an acquittal a year ago in what was then a Republican-controlled Senate.

Senators on Wednesday were shown searing security footage the pro-Trump mob stalking the Capitol hallways chanting "Hang Mike Pence!" and searching for Democratic House Speaker Nancy Pelosi. On Thursday, they have planned to illustrate the "terrible toll" of the riot and Trump's "role in assembling, inciting and inflaming the insurrectionists," a House aide said.

Also read | Convict Trump as he is overwhelmingly guilty: Prosecutors urge US Senate over Capitol attack

House managers said Trump had planted the seeds for the riot by encouraging violence and making false claims the election was stolen long before January 6. They also said he did little to stop the violence as it spiralled out of control, despite pleas from many Republicans to ask his supporters to stop.

On Tuesday, the Senate voted largely along party lines to move ahead with the impeachment trial even though Trump's term ended on January 20. Six of 50 Republican senators broke with their caucus to side with Democrats.