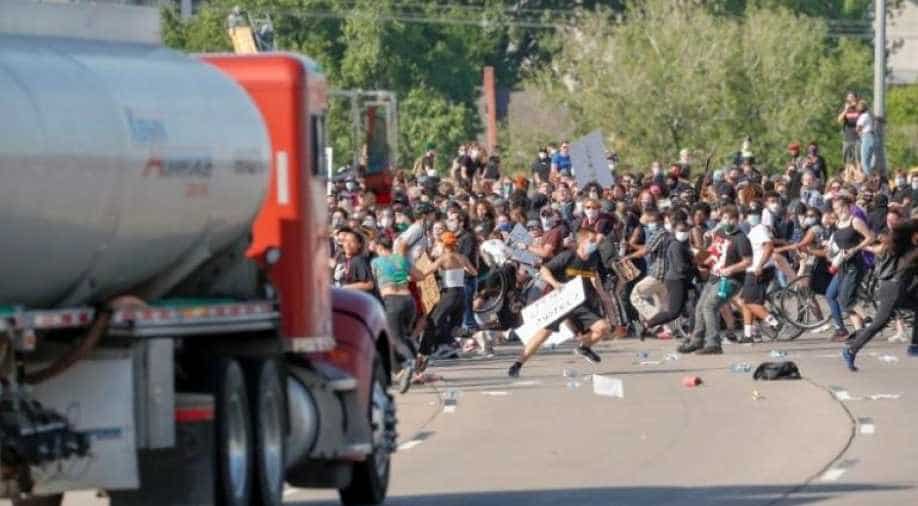 In response, the police hit back with full force and brutality. They rammed a car into a group of protesters in Brooklyn. These scenes are not unique to New York.

The United States of America is deeply divided and the superpower is burning. First, the pandemic killed more than one lakh people, then the economy began bleeding with the lockdown and now riots are spreading across the country.

The death of an unarmed black man in police custody has triggered violent mass protests. Public anger has exploded, much like a volcano. People are pouring out on the streets protesting.

Many are marching peacefully. Many more, are indulging in violence and looting. They are clashing with the police. Social distancing is distant history. Large crowds are coming together. They are fighting the police with sticks and stones.

New York is America's biggest coronavirus hotspot. It accounts for the highest number of deaths. On Saturday, a police car was set on fire. Protesters threw bricks and rocks at the police.

In response, the police hit back with full force and brutality. They rammed a car into a group of protesters in Brooklyn. These scenes are not unique to New York.

Similar stories are playing out across America. The black community, which is in minority says it has had enough. They are out on the streets.

In the middle of a deadly pandemic and, they are demanding serious reforms, especially for the police force.

This is not a war zone. This a high seat of power now overrun by angry Americans. It is near the White House with protesters burning fires and clashing with the police.

As the violent protest erupted outside his home, America's commander in chief took refuge in an underground bunker in the White House. A facility that has been used to protect the president during terrorist attacks. Now he is hiding there from his own people as his country turns into a battleground.

Make America great again, he said. Evidently, it hasn't gone as per plan.

There were clashes in Portland. Stores were looted in Chicago. Thieves broke through the store entrance and grabbed whatever they could get their hands on from furniture to television sets.

This is a political wildfire and the president is adding fuel through his tweets.

Minneapolis-- where it began-- continues to burn. A tanker almost rammed into a group of protesters on a highway on Sunday. No protester was hurt but they overpowered the driver of the tanker. They beat him up and he suffered injuries.

There are protestors of all descriptions. Some, as the president says, are thugs. Others are genuinely out for a cause. Whatever the motive, the issue is real and serious.

Americans clashing with the police. Streets and cars are on fire. Stores are being looted. Journalists are being attacked. There's a complete breakdown of law and order.

This is Trump's America for you, a superpower. With all its faultlines exposed. Its moral authority and credibility fast eroding.