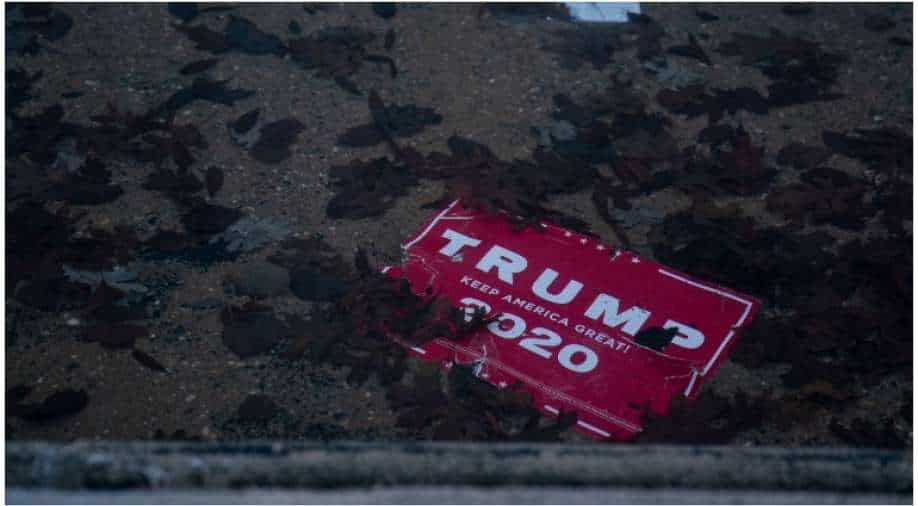 FILE -- A "Trump 2020" campaign sign is seen in the Lincoln Memorial Reflecting Pool near the Capitol in Washington on Friday, Jan. 8, 2021, after rioters loyal to President Donald Trump stormed the Capitol on Wednesday. The events of Jan. 6 appear to have damaged President Trump in his final days in office in a way that finally moved the needle as his approval rating reaches 29 percent, the lowest of his presidency, according to a new poll from the Pew Research Center. Photograph:( The New York Times )

The events of Jan. 6 — when a violent mob of Trump supporters incited by the president stormed the Capitol — appear to have damaged him in his final days in office in a way that finally moved the needle

Throughout four years of scandals and investigations, President Donald Trump has maintained an approval rating that rarely budged from a 10-point band between 35% and 45%. Nothing he could say, do or tweet appeared to dramatically change public opinion of him.

But the events of Jan. 6 — when a violent mob of Trump supporters incited by the president stormed the Capitol — appear to have damaged him in his final days in office in a way that finally moved the needle.

Trump is set to depart office Wednesday with an approval rating of 29%, the lowest of his presidency, according to a new poll from the Pew Research Center.

About 75% of the public said Trump bore some responsibility for the violence and destruction of Jan. 6, which put the lives of the vice president and members of Congress at risk and resulted in five deaths, according to the survey.

And his behavior since the election — a period during which he has repeatedly tried to contest his loss, relied on conspiracy theorists for advice, encouraged supporters who do not view President-elect Joe Biden as legitimate, and refused to concede — has cost Trump support even with those individuals who have loyally supported him until now.

According to Pew, the share of his supporters who described his conduct as “poor” has doubled, from 10% to 20%, over the past two months.

Biden, in contrast, has benefited from how he has handled the transition period. About 64% of voters said they had a positive opinion of his conduct since the November election. The majority of voters said they also approved of his Cabinet selections.

Trump’s polling while in office has been surprisingly stagnant, despite regular eruptions from the president. He was the only president in the history of Gallup’s polling who never earned the support of a majority of Americans for even one day of his term. But he also held onto his durable base, who appeared willing to overlook any behavior they did not approve of, or any promises that Trump never followed through on.

That group now appears to have shrunk, although Trump still has some stalwart supporters who believe the conspiracy theories he has encouraged about election fraud. About 34% of respondents said they believed that Trump was “definitely” or “probably” the rightful election winner.

Trump’s advisers have tried to play up that base of loyal support to him, noting that there are “welcome home” events planned for his arrival in Florida on Wednesday. They have also planned an upbeat send-off Wednesday morning to commemorate his final departure from Washington as president, aboard Air Force One.

But whatever show of support he sees on his way out will belie the reality of his situation.

Not only has he made history as the first president to be impeached twice. But he appears to be on track to leave office with the lowest approval rating of any modern-day president.