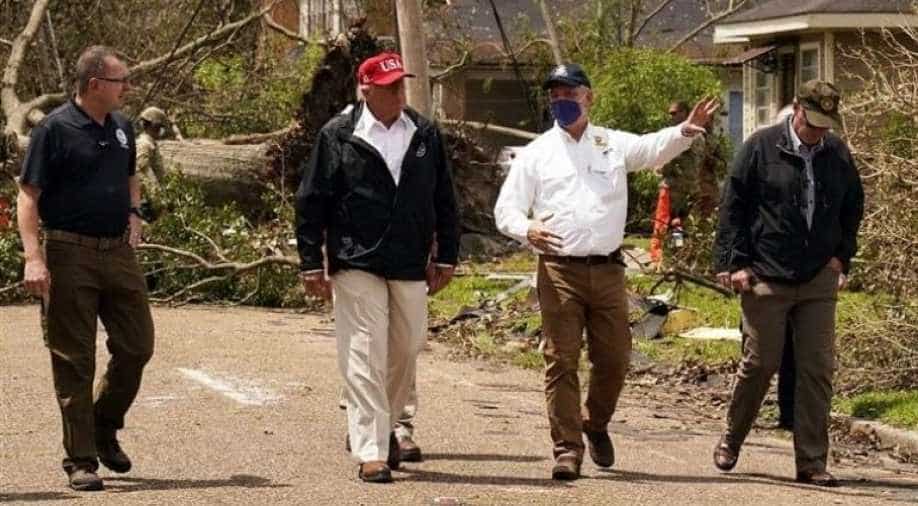 The category four hurricane killed at least 15 people, with some of those killed by carbon monoxide poisoning from the unsafe operation of generators.

President Donald Trump on Saturday visited Louisiana and Texas, pummeled this week by Hurricane Laura though the storm did not inflict the catastrophic damage and death toll of Hurricane Katrina 15 years ago.

The massive storm hit Louisiana early on Thursday with 150 mile-per-hour winds, damaging buildings, knocking down trees and cutting power to more than 650,000 people in Louisiana and Texas. The category four hurricane killed at least 15 people, with some of those killed by carbon monoxide poisoning from the unsafe operation of generators.

Wearing a red "USA" cap, Trump landed in Lake Charles, a Louisiana city of 80,000 people that's home to petroleum refineries and chemical plants near the Gulf of Mexico. He toured a neighborhood with downed trees and damaged houses, as well as a warehouse.

The Federal Emergency Management Agency (FEMA) has already distributed 2.6 million liters of water and 1.4 million meals, Trump said, as hundreds of thousands of storm victims are without electricity and running water.

"I haven't had one complaint," Trump said, congratulating federal and local officials at a news conference at a fire station.

"Louisiana has been through a lot with the Covid and with this, a couple other things. You've done a great job," he told the officials, who included the state's Democratic Governor John Bel Edwards.

It has been blamed for at least 14 deaths in Louisiana and Texas, with more than half of them due to improper use of portable generators, which produce toxic carbon monoxide gas.

Trump later flew by helicopter to the nearby city of Orange, Texas, meeting with state officials to discuss their response to Laura.

At a briefing, Texas Governor Greg Abbott said he believed the state got through Laura without spreading Covid-19.

"You are helping Texas to rebuild," Trump told the governor.

After the announcement about 1,000 people joined a mile-long march in Kenosha, Wisconsin on Saturday, chanting "Black Lives Matter" and "No Justice, No Peace".

"Probably so," Trump told reporters in Texas, when asked if he would visit the city where the officer shot Jacob Blake, who is paralyzed from the waist down and remains in hospital. A 17-year-old is being held by authorities in Kenosha on suspicion of shooting three people who were protesting the shooting of Blake. Two of those people died.