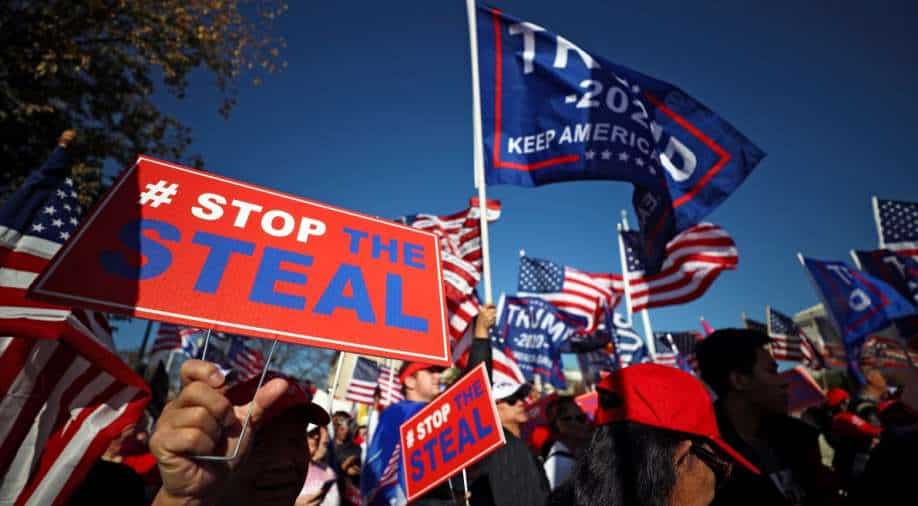 Trump notably has refused to accept the outcome of the recently conducted US election -- even a week after Democrat Joe Biden clinched the polls, and has launched a flurry of dubious legal challenges to overturn the results.

Thousands of supporters of the incumbent president of the United States, Donald Trump, marched through downtown Washington on Saturday -- in coherence with his unsubstantiated claims of election fraud.

Trump notably has refused to accept the outcome of the recently conducted US election -- even a week after Democrat Joe Biden clinched the polls, and has launched a flurry of dubious legal challenges to overturn the results.

Election officials around the country have, however, said they saw no evidence of serious irregularities.

On Saturday, the protesters carried flags, chanted "stop the steal", and walked from Freedom Plaza near the White House to the US Supreme Court building on Capitol Hill as part of the "Million MAGA March," referring to Trump's campaign mantra of "Make American Great Again."

Trump's motorcade briefly drove through the crowds on the way to his golf course in Sterling, Virginia. Demonstrators cheered as the president, wearing a red baseball cap emblazoned with the slogan, waved from inside the presidential limousine.

Donald Tarca Jr, who travelled to Washington from West Palm Beach, Florida, held a massive US flag sporting a giant portrait of Trump.

Scores of members of the far-right Proud Boys group, mostly clad in black with some wearing helmets and ballistic vests, were among the marchers. Some left-wing groups staged small counter-demonstrations, including members of the loose movement known as antifa.

Near the Supreme Court, some counter-protesters carried black umbrellas and makeshift shields, while others formed a line of bicycles to prevent pro-Trump protesters from approaching their group from the rear.

In one of at least half a dozen scuffles and several tense standoffs in which police manned barricades between groups, several counter-protesters near Union Station attacked a Trump supporter, who fell to the ground and received medical care after suffering a cut to the head.

The city's police department had made 10 arrests by mid-afternoon, a spokeswoman told Reuters.

Biden, however, spent the morning at his beach house in Delaware meeting with transition advisors. He has largely ignored Trump's repeated claims of fraud, instead focussing on preparing to govern and fielding congratulatory calls from world leaders.

A little progress was made on Trump's part on Friday, when he began to sound doubtful about his prospects for the first time. He told reporters "time will tell" who occupies the White House starting on Inauguration Day, January 20.

Biden won 306 votes to Trump's 232 in the state-by-state Electoral College system that determines the winner, according to Edison Research, far more than the 270 required to win the election. He also leads in the national popular vote by more than 5.5 million votes, or 3.6%.

The Trump campaign has filed lawsuits in multiple states with little success thus far. Legal experts have said the litigation is extremely unlikely to alter the election outcome.