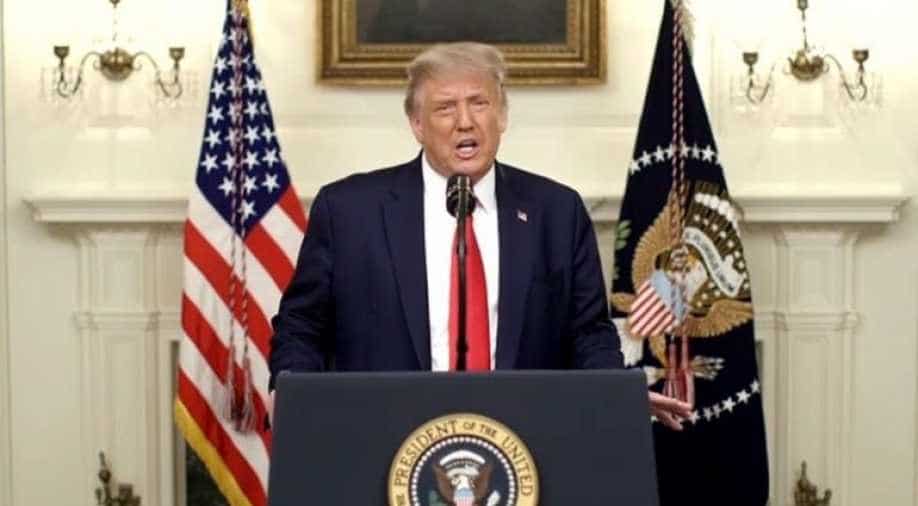 Trump’s own business history is filled with overseas financial deals, and some have involved the Chinese state.

President Donald Trump and his allies have tried to paint the Democratic nominee, Joe Biden, as soft on China, in part by pointing to his son’s business dealings there.

Senate Republicans produced a report asserting, among other things, that Biden’s son Hunter “opened a bank account” with a Chinese businessman, part of what it said were his numerous connections to “foreign nationals and foreign governments across the globe.”

But Trump’s own business history is filled with overseas financial deals, and some have involved the Chinese state. He spent a decade unsuccessfully pursuing projects in China, operating an office there during his first run for president and forging a partnership with a major government-controlled company.

And it turns out that China is one of only three foreign nations — the others are Britain and Ireland — where Trump maintains a bank account, according to an analysis of the president’s tax records, which were obtained by The New York Times. The foreign accounts do not show up on Trump’s public financial disclosures, where he must list personal assets, because they are held under corporate names. The identities of the financial institutions are not clear.

The Chinese account is controlled by Trump International Hotels Management LLC, which the tax records show paid $188,561 in taxes in China while pursuing licensing deals there from 2013 to 2015.

The tax records do not include details on how much money may have passed through the overseas accounts, though the Internal Revenue Service does require filers to report the portion of their income derived from other countries. The British and Irish accounts are held by companies that operate Trump’s golf courses in Scotland and Ireland, which regularly report millions of dollars in revenue from those countries. Trump International Hotels Management reported just a few thousand dollars from China.

In response to questions from The Times, Alan Garten, a lawyer for the Trump Organization, said the company had “opened an account with a Chinese bank having offices in the United States in order to pay the local taxes” associated with efforts to do business there. He said the company had opened the account after establishing an office in China “to explore the potential for hotel deals in Asia.”

“No deals, transactions or other business activities ever materialized and, since 2015, the office has remained inactive,” Garten said. “Though the bank account remains open, it has never been used for any other purpose.”

Garten would not identify the bank in China where the account is held. Until last year, China’s biggest state-controlled bank rented three floors in Trump Tower, a lucrative lease that drew accusations of a conflict of interest for the president.

China continues to be an issue in the 2020 presidential campaign, from the president’s trade war to his barbs over the origin of the coronavirus pandemic. His campaign has tried to portray Biden as a “puppet” of China who, as vice president, misread the dangers posed by its growing power. Trump has also sought to tar his opponent with overblown or unsubstantiated assertions about Hunter Biden’s business dealings there while his father was in office.

“He’s like a vacuum cleaner — he follows his father around collecting,” Trump said recently, referring to Biden’s son. “What a disgrace. It’s a crime family.”

In a misleading claim amplified by surrogates like his son Donald Trump Jr. and his lawyer Rudy Giuliani, the president has said the younger Biden “walked out of China” with $1.5 billion after accompanying his father on an official trip in 2013. Numerous news articles and fact-checking sites have explained that the huge figure was actually a fundraising goal set by an investment firm in which Hunter Biden obtained a 10% stake after his father left office. The firm did receive financial backing from a large state-controlled bank, but it is not clear the fundraising target was ever met, and there is no evidence Hunter Biden received a large personal payout.

As for the former vice president, his public financial disclosures, along with the income tax returns he voluntarily released, show no income or business dealings of his own in China. However, there is ample evidence of Trump’s efforts to join the myriad American firms that have long done business there — and the tax records for him and his companies that were obtained by The Times offer new details about them.

As with Russia, where he explored hotel and tower projects in Moscow without success, Trump has long sought a licensing deal in China. His efforts go at least as far back as 2006, when he filed trademark applications in Hong Kong and the mainland. Many Chinese government approvals came after he became president. (The president’s daughter Ivanka Trump also won Chinese trademark approvals for her personal business after she joined the White House staff.)

In 2008, Trump pursued an office tower project in Guangzhou that never got off the ground. But his efforts accelerated in 2012 with the opening of a Shanghai office, and tax records show that one of Trump’s China-related companies, THC China Development LLC, claimed $84,000 in deductions that year for travel costs, legal fees and office expenses.

After effectively planting his flag there, Trump found a partner in the State Grid Corp., one of the nation’s largest government-controlled enterprises. Agence France-Presse reported in 2016 that the partnership would have involved licensing and managing a development in Beijing. Trump was reportedly still pursuing the deal months into his first presidential campaign, but it was abandoned after State Grid became ensnared in a corruption investigation by Chinese authorities.

It is difficult to determine from the tax records precisely how much money Trump has spent trying to land business in China. The records show that he has invested at least $192,000 in five small companies created specifically to pursue projects there over the years. Those companies claimed at least $97,400 in business expenses since 2010, including some minor payments for taxes and accounting fees as recently as 2018.

But Trump’s plans in China have been largely driven by a different company, Trump International Hotels Management — the one with a Chinese bank account.

The company has direct ownership of THC China Development, but is also involved in management of other Trump-branded properties around the world, and it is not possible to discern from its tax records how much of its financial activity is China-related. It normally reports a few million dollars in annual income and deductible expenses.

In 2017, the company reported an unusually large spike in revenue — some $17.5 million, more than the previous five years’ combined. It was accompanied by a $15.1 million withdrawal by Trump from the company’s capital account.

On the president’s public financial disclosures for that year, he reported the large revenue figure, and described it only as “management fees and other contract payments.” One significant event for the company that is known to have occurred in 2017 was the buyout of its management contract for the Soho Hotel in New York, which Bloomberg reported to have cost around $6 million.

Garten would not comment on the specific amount cited by Bloomberg, but said that the contract buyout represented a “significant portion” of the company’s revenue and that the remaining money was not related to China.

Outside of China, Trump has had more success attracting wealthy Chinese buyers for his properties in other countries. His hotels and towers in Las Vegas and Vancouver, British Columbia — locales known for drawing Chinese real estate investors — have found numerous Chinese purchasers, and in at least one instance drew the attention of the Federal Bureau of Investigation.

During the 2016 campaign, a shell company controlled by a Chinese couple from Vancouver bought 11 units, for $3.1 million, in the Las Vegas tower Trump co-owns with the casino magnate Phil Ruffin. The owner of a Las Vegas-based financial services firm told The Times he was later visited by two FBI agents asking about the company behind the purchases, which he said had used his office address in incorporation papers without his knowledge. It is not known what became of the inquiry.

Garten said the Trump Organization had “never been contacted by the FBI and has no knowledge of any investigation.”

In Vancouver, numerous Chinese buyers of units in Trump’s hotel and tower helped increase licensing fees from that project to $5.8 million in 2016, the year it was completed, according to tax records. The project was built by a Canadian-based firm controlled by the family of Malaysia’s richest man, Tony Tiah Thee Kian, who operates hotels in China and elsewhere. CNN reported in 2018 that the Vancouver operation was the subject of a counterintelligence review related to Ivanka Trump’s need for a security clearance.

And not long after winning the 2016 election, Trump reported selling a penthouse in one of his Manhattan buildings for $15.8 million to a Chinese-American businesswoman named Xiao Yan Chen, who bought the unit, previously occupied by Ivanka Trump and her husband, Jared Kushner, in an off-market transaction. Chen runs an international consulting firm and reportedly has high-level connections to government and political elites in China.

Trump’s tax records show that he reported a capital gain of at least $5.6 million from the penthouse sale in 2017, his first year as president.