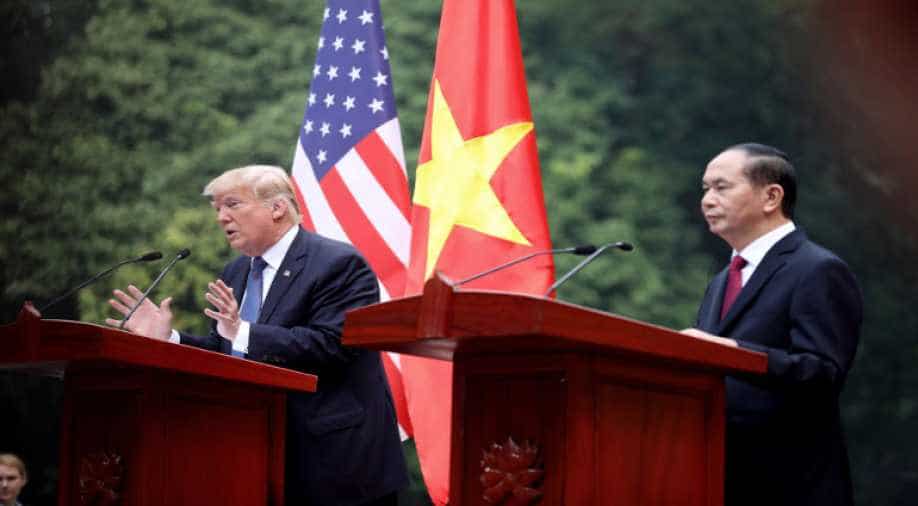 Vietnam and the United States signed a series of energy and aviation deals Sunday during a visit to Hanoi by US president Donald Trump, who railed against Washington's yawning trade deficit with the fast-growing nation.

Trump was in the communist capital at the tail-end of his swing through Asia where he has promoted his "America First" mantra on global trade -- prioritising "fair" bilateral deals over sprawling multilateral pacts.

Several agreements were signed during his state visit Sunday, including those covering the natural gas sector, transport and aviation.

National carrier Vietnam Airlines signed a deal worth $1.5 billion for engines and support services from US firm Pratt & Whitney.

"(The agreement) will further reinforce the important economic, trade and investment partnership between Vietnam and the United States," airline CEO Duong Tri Thanh said in a statement.

Trump is seeking to boost exports of American goods and services as part of a campaign pledge. He won office with strong support from blue-collar US workers.

On Sunday Trump again complained about the United States' gaping trade deficit with Vietnam, worth $32 billion in 2016.

"We have to get rid of the trading imbalance, we can't have a trade imbalance," he said at the beginning of a meeting with Vietnamese Prime Minister Nguyen Xuan Phuc.

Vietnam has eagerly sought to drum up trade and investment with the United States since Trump came to power, especially after he withdrew from the massive Trans-Pacific Partnership free trade deal from which Vietnam stood to gain enormously.

The US is a leading export market for Vietnam, whose booming manufacturing sector has largely driven dizzying economic growth in recent years.

US exports to Vietnam have soared in the past decade, increasing ninefold to more than $10 billion in 2016, according to the US Trade Representative. Vietnam's exports to the United States over the same period rose around fivefold.