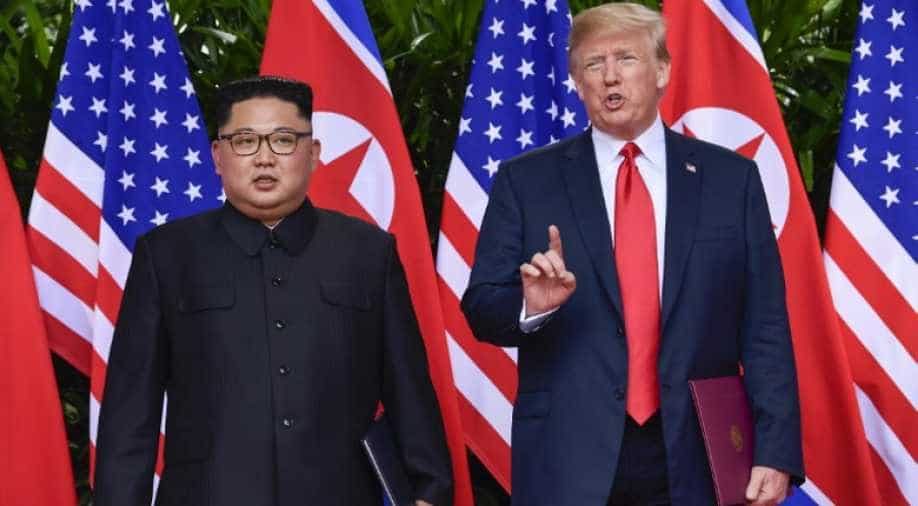 US President Donald Trump makes a statement before saying goodbye to North Korea leader Kim Jong-un after their meetings at the Capella resort on Sentosa Island in Singapore. Photograph:( AFP )

During the Singapore summit earlier, Trump in a friendly gesture had given Kim a glimpse inside his presidential car "The Beast".

According to reports, former US president Trump offered North Korea's leader Kim Jong Un a ride home in Air Force after the 2019 summit in Vietnam.

A BBC documentary quoting a top Asia expert on Trump's National Security Council Matthew Pottinger reported that Trump knew that Kim had undertaken a long trip in his train through China to Hanoi, so Trump reportedly told the North Korean leader that "I can get you home in two hours if you want".

Trump's offer was reportedly declined by Kim. For his first summit with Trump in Singapore in 2018, the North Korean leader had taken a ride on Air China plane

During the Singapore summit earlier, Trump in a friendly gesture had given Kim a glimpse inside his presidential car "The Beast".

Kim and Trump had earlier engaged in a war of words with the former US president calling Kim "rocket man", the Hanoi summit however ended in failure after talks broke up over sanctions relief as Trump walked out.

The attempted denuclearisation of the Korean Peninsula which was the key agenda of Trump did not materialise as Kim refused to put a timeline, in fact, last month Kim said the US was North Korea's "biggest enemy" while asserting that US policy against North Korea will never change no matter "who is in power".

The new US president Joe Biden has vowed to work with allies including Japan and South Korea to chart the way forward on North Korea.