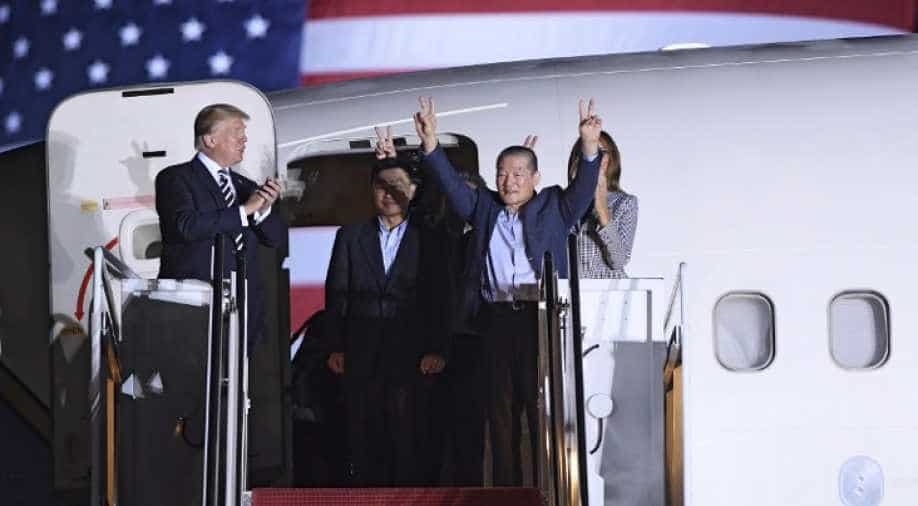 President Donald Trump applauds as US detainee Kim Dong-chul upon his return with Kim Hak-song and Tony Kim after they were freed by North Korea at Joint Base Andrews in Maryland. Photograph:( AFP )

Trump arrived at the US air force base along with this wife Meliana to receive the US prisoners.

Three American prisoners freed by North Korea arrived at St Andrews Air Force base in Maryland as President Trump stood at the tarmac at 2:30am on Thursday morning to welcome them.

I am pleased to inform you that Secretary of State Mike Pompeo is in the air and on his way back from North Korea with the 3 wonderful gentlemen that everyone is looking so forward to meeting. They seem to be in good health. Also, good meeting with Kim Jong Un. Date & Place set.

The three men - Kim Dong Chul, Kim Hak Song and Tony Kim - were imprisoned by North Korea as relations between the US deteriorated with Kim and Trump traded daily insults against each other last year.

However, in March Trump made a surprise announcement on accepting an invitation by Kim to meet him for summit talks as the North Korean leader decided to denuclearise the Korean peninsula.

The freed "hostages" were handed to US Secretary of State Mike Pompeo after he concluded talks with North Korean leader Kim Jong Un on Wednesday.

"Pompeo did a fantastic job," Trump said as he received the three prisoners at the air base.

Trump arrived at the US air force base along with this wife Melania to receive the US prisoners.

The freeing of the prisoners was widely seen as "goodwill gesture" by the North Koreans ahead of Trump-Kim summit talks next month.