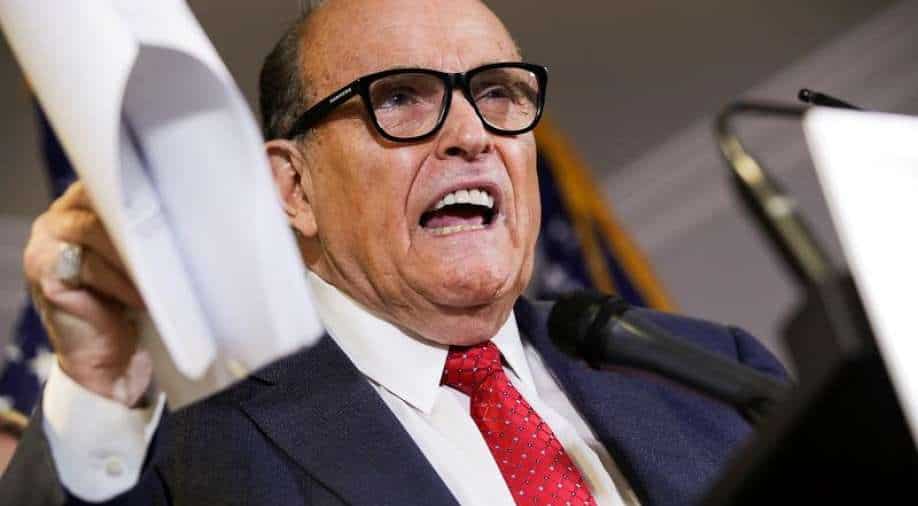 The actions by political appointees at the Justice Department in Washington effectively slowed the investigation as it was gaining momentum last year.

In the final months of the Trump administration, senior Justice Department officials repeatedly sought to block federal prosecutors in Manhattan from taking a crucial step in their investigation into Rudy Giuliani’s dealings in Ukraine, delaying a search warrant for some of Giuliani’s electronic records, according to people with knowledge of the matter.

The actions by political appointees at the Justice Department in Washington effectively slowed the investigation as it was gaining momentum last year.

In the final months of 2020, the prosecutors were still delving into whether Giuliani had illegally lobbied the Trump administration on behalf of Ukrainian officials and oligarchs who had helped him look for dirt in 2019 on Joe Biden, then a leading Democratic candidate, the people said.

Unflinchingly loyal to former President Donald Trump, Giuliani has been a central figure in both of the former president’s impeachments, first working on Trump’s behalf in Ukraine and then spearheading a drive to overturn the election results that culminated in the Jan. 6 rally shortly before Trump supporters violently stormed the Capitol.

Last summer, prosecutors and FBI agents in Manhattan were preparing to seek the search warrant for Giuliani’s records related to his efforts in Ukraine, said the people, who spoke on the condition of anonymity because they were not authorized to discuss the ongoing investigation.

But first, the investigators in Manhattan had to notify Justice Department officials in Washington, who must be consulted about search warrants involving lawyers because of concerns that prosecutors might inadvertently obtain confidential communications with clients. The warrant involving Giuliani was particularly sensitive because of his most prominent client — Trump.

While career Justice Department officials in Washington largely supported the search warrant, senior officials raised concerns that the warrant would be issued too close to the election, the people with knowledge of the matter said.

In the 60 days before an election, the Justice Department generally tries to avoid taking aggressive investigative actions that could affect the outcome of the vote if the actions were to become public.

The Manhattan prosecutors noted to officials in Washington that they initially raised the idea in the summer, before the 60-day cutoff, the people said. And after the election, the prosecutors tried again.

But even then, political appointees in Trump’s Justice Department, including officials in the deputy attorney general’s office at the time, did not approve, noting Trump was still contesting the election results in several states — a legal effort being led by Giuliani, the people said.

And while the political appointees were skeptical that there was enough evidence to charge Giuliani, the career officials involved felt there was sufficient reason to believe that the search would turn up evidence of a crime, the legal standard to obtain a warrant.

Ultimately, senior officials in Washington proposed delaying a decision on the subpoena until the Biden administration took over. It is unclear whether the prosecutors have obtained a warrant since Biden was sworn in.

The episode was not the only time Trump’s Justice Department had tried to intervene in a politically sensitive investigation by the U.S. attorney’s office in Manhattan, one of the most independent prosecutor’s offices in the country. In June, Trump fired the head of the office, Geoffrey S. Berman, who oversaw a number of investigations into Trump’s allies, including Stephen Bannon.

CNN first reported Wednesday that the potential search warrant was met with resistance from Justice Department officials in Washington who questioned the strength of the evidence against Giuliani. In December, NBC News reported that the Manhattan prosecutors had discussed making a legal request for Giuliani’s electronic communications.

The investigation into Giuliani has centered on his dealings with the Ukrainian officials and oligarchs who claimed to have damaging information about Biden’s son, Hunter, who was on the board of an Ukrainian energy company, the people said.

As part of that focus, federal prosecutors in Manhattan scrutinized Giuliani’s ties to Dmitry Firtash, a Ukrainian oligarch who is under indictment in the United States, according to documents and people with knowledge of the matter.

Hoping to avoid extradition to the United States, Firtash hired two lawyers close to Giuliani to argue his case at the highest levels of the Justice Department, while Giuliani sought Firtash’s help in gathering negative information on the Bidens, these people said.

It is unclear whether the investigation will result in any charges against Giuliani, the onetime mayor of New York City and former U.S. attorney in charge of the same office that is now examining his conduct.

Although Giuliani has not been accused of wrongdoing, he remains vulnerable to federal scrutiny because Trump left office last month without granting him a pardon, despite months of speculation that Giuliani might receive preemptive clemency.

Before Trump issued a wave of pardons on his last day in office, Giuliani said on his radio show that he did not need a pardon. “I don’t commit crimes,” he said.

In the final weeks of the Trump administration, Giuliani discussed with associates whether he should seek a pardon before ultimately opting not to do so, two people with direct knowledge of the discussions said.

The White House Counsel’s Office had cautioned against preemptively pardoning Giuliani, one of the people said, because doing so might raise questions about whether he needed clemency for his involvement in the Jan. 6 rally, the focus of Trump’s current impeachment trial. It is unclear whether the federal prosecutors in Washington investigating the riot are also examining Giuliani’s speech at the rally.

In Manhattan, the federal investigation into Giuliani grew out of a case against two Soviet-born men, Lev Parnas and Igor Fruman, who aided his mission in Ukraine.

Even before his work for Trump, Giuliani had business in Ukraine, including a 2017 contract to help the town of Kharkiv improve its emergency services and bolster its image as a destination for investment. The deal was arranged by Pavel Fuks, a wealthy Ukrainian-Russian developer who said that Giuliani was hired to lobby for the town, a claim that Giuliani denies.

The Manhattan prosecutors have examined Giuliani’s dealings with Fuks, the people briefed on the matter said.

The Manhattan prosecutors also interviewed at least one witness who testified before Congress during Trump’s impeachment proceedings as part of the examination of Giuliani’s potential business dealings in Ukraine and his role in pressing the Trump administration to oust the U.S. ambassador in Kyiv.

While pressuring Ukraine to investigate Trump’s political rivals, Giuliani became fixated on removing the ambassador, whom he saw as an obstacle to those efforts. At the urging of Giuliani and other Republicans, Trump ultimately removed the ambassador, Marie L. Yovanovitch, a decision that was at the heart of the first impeachment trial.

Giuliani has said he acted as Trump’s lawyer, but the federal prosecutors in Manhattan have explored whether he was also working covertly for Ukrainian officials or oligarchs who wanted the ambassador gone for their own reasons, according to people briefed on the matter.

Under the Foreign Agents Registration Act, it is a federal crime to try to influence or lobby the U.S. government at the request or direction of a foreign official without disclosing it to the Justice Department.

Yuriy Lutsenko, one of the officials who pressed Giuliani and his associates to fight for the ambassador’s removal, aided their Ukrainian dirt-digging mission. And at the same time, Giuliani pursued hundreds of thousands of dollars in business from Lutsenko, a potential deal that drew the scrutiny of the prosecutors and the FBI. Giuliani has said he turned down the deal.