Trump, industry work behind the scenes to save Saudi arms package 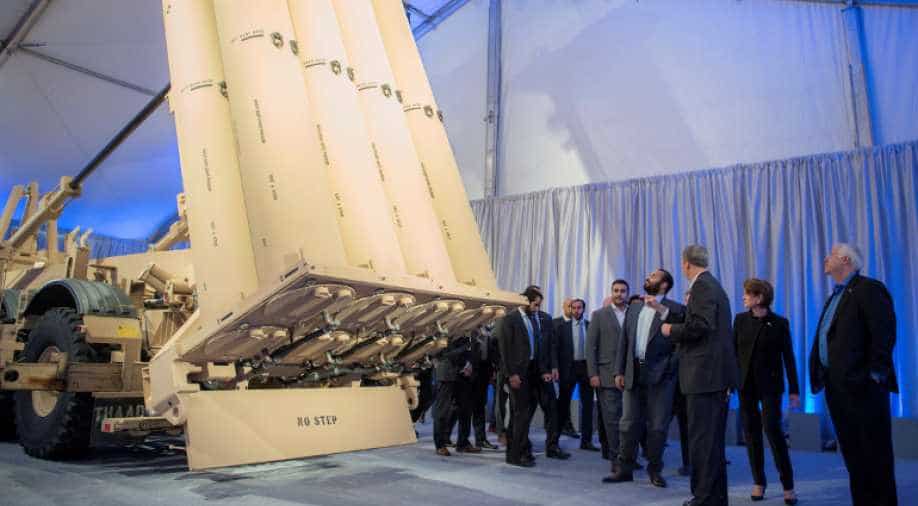 President Donald Trump has hedged his criticism of Saudi leaders over the disappearance and death of US resident and Washington Post columnist Jamal Khashoggi, insisting he does not want to imperil a 'tremendous order' of $110 billion of weapons he says will support 500,000 US jobs - figures that experts say are highly exaggerated.

The Trump administration and the US defence industry are scrambling to save the few actual deals in the much-touted $110 billion arms package for Saudi Arabia as concerns rise about the role of the Kingdom's leadership over the death of a prominent critic.

President Donald Trump has hedged his criticism of Saudi leaders over the disappearance and death of US resident and Washington Post columnist Jamal Khashoggi, insisting he does not want to imperil a "tremendous order" of $110 billion of weapons he says will support 500,000 US jobs - figures that experts say are highly exaggerated.

Khashoggi's killing in the Saudi consulate on October 2 has caused global outrage and raised questions about the possible role of Crown Prince Mohammed bin Salman, the powerful de facto ruler of Saudi Arabia who controls the kingdom's security services.

Riyadh has blamed a "rogue operation" and said the crown prince had no knowledge of the killing.

Working behind the scenes in Washington, a defence industry group has circulated talking points to industry executives, focusing on the importance of arms sales to US allies. Companies hope to preserve the deals on the Saudi list with near-term delivery dates in 2019 and 2020, ideally firming up the soft commitments made during Trump's trip in May 2017.

"Contingency Points On Defense Sales to Saudi Arabia" were emailed to defence contractors by the Aerospace Industry Association (AIA) in recent days, instructing executives to explain that stopping arms sales could reduce the US ability to influence foreign governments.

Talking points help executives promote their point of view when speaking with their own staff, suppliers, the media, government officials and elected officials.

The AIA email says the death of Khashoggi "sparked an important conversation about the United States' relationship with Saudi Arabia," and details two short responses to whether industry communicated with US government about Khashoggi and the scale of arms sales to Saudi Arabia last year before a lengthy response to the "jobs question."

Yet the answer, laid out in four bullet points, does not mention the numbers Trump has spoken about or any other estimates of possible job gains, instead touching on "economic impact" and explaining how weapons sales strengthen political-military relationships.

"When we sell American products to allies and partners, we can ensure our adversaries aren't able to supplant our political, military or economic ties," the document says.

AIA spokeswoman Caitlin Hayden said she wouldn't comment on the details of the email sent to their members, adding they do not tell their members what to say on any given issue. AIA's executive committee includes the chief executives of the top five US defence contractors Lockheed Martin Corp, Northrop Grumman Corp, Boeing Co, Raytheon Co, and General Dynamics Corp.

Defence contractors have a lot to worry about. Republican Senator Bob Corker, who as the chairman of the Senate Foreign Relations Committee can block foreign military arms sales, told reporters at the US Capitol that a defence contractor had come to see him at his office, and he had warned that – even before Khashoggi's death - it would not be a good time to try to push a major defence deal through Congress.

Speaking of Khashoggi's death Corker said: "I know that Congress will not let this idly go by. This is something that enrages people, as it should."

A bipartisan group of lawmakers introduced a bill in the House of Representatives on Wednesday that would stop most US arms sales to Saudi Arabia in response to Khashoggi's death.

Under mounting Congressional criticism the White House has also stepped up its efforts to save the Saudi arms sales package. Peter Navarro, Trump's White House trade chief and architect of his "Buy American" policy to ease restrictions on foreign arms sales, has been a significant voice during the Khashoggi affair in reinforcing to the president the importance of Saudi weapons deals and the US job implications, a senior US official told Reuters, speaking on condition of anonymity.

At a roundtable with defence contractors at Luke Air Force Base in Arizona on Saturday, Trump and his aides sought to ease top executives concerns about future Saudi arms sales, assuring them that the President would do all he could to keep them on track, the official said.

How Trump has arrived at the 500,000 jobs figure deal is unclear since the five biggest US defence contractors, who manufacture nearly every item on the Saudi list, now only employ 383,000 people.

Since the $110 billion package was first announced 18 months ago, some Saudi payments, like those to Lockheed Martin, for its frigates have begun to flow. But most of the other deals, such as a $13.5 billion THAAD missile defence system from Lockheed, have languished without a firm purchase agreement.

As it stands, the US State Department said it has begun processing over $14.5 billion of military sales to Saudi Arabia since Trump's trip.

Many of the remaining deals were either already negotiated under President Obama or were conditional in nature. Industry executives and government officials speaking on condition of anonymity said the Saudis wanted much of the military equipment only if the deals created new jobs the kingdom as a part of Crown Prince Mohammed bin Salman's Vision 2030 initiative.

According to a 2017 draft list of deals in the arms package seen by Reuters about $95 billion were defined as memorandums of intent, non-binding commitments to buy.

Even before the disappearance of Khashoggi, Trump and Saudi King Salman discussed in a late September phone call the THAAD missile defence system deal, a Saudi official told Reuters earlier this month. The official said the deal could well be closed by the end of the year. The official was speaking before Saudi authorities admitted that Khashoggi had been killed inside the consulate, and it was unclear if the case would have any effect on the deal.
Lockheed said this week they did not know when a firm agreement would be signed.

Saudi Arabia - seen as the linchpin of the Trump administration’s strategy to counter Iran’s influence in the Middle East - is a top buyer of US military equipment. Its imports totalled $65 billion between 2009 and 2016, according to the Government Accountability Office that monitors public finances and halting shipments to the kingdom would be inconceivable for the US defence industry.

Still, defence contractors and the administration worry deals could stall in Congress where Democrats and Republicans alike are alarmed by the Khashoggi case, which has laid bare the risks of downgrading human rights concerns amid the "Buy American" push.

Even before the news of his death, Democratic lawmakers have effectively blocked at least four military equipment deals from being finalised, leaving them in limbo, largely because of Saudi attacks that killed Yemeni civilians.

"This makes it more likely they'll expand holds to include systems that aren't necessarily controversial by themselves. It's a major concern," the senior administration official said, speaking on condition of anonymity.