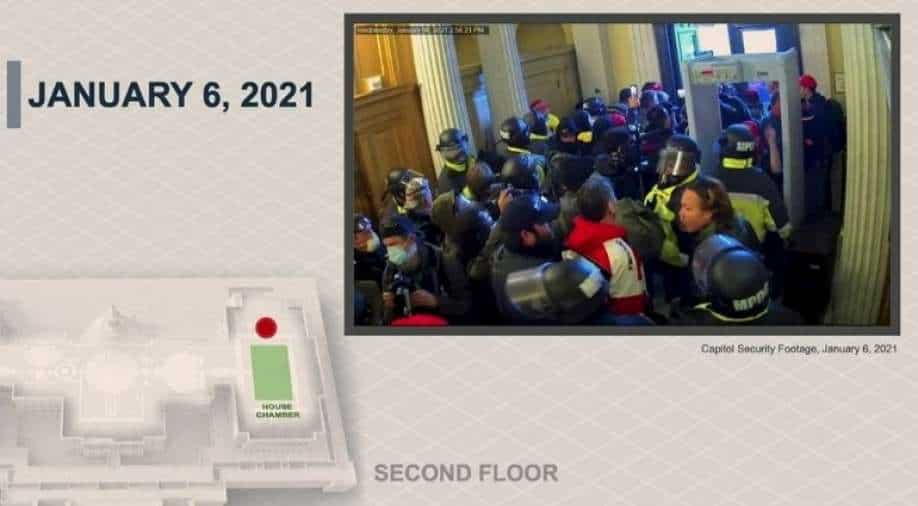 The impeachment trial of former US President Donald Trump on Wednesday was focussed around chilling footage of lawmakers running for their lives as rioters rampaged through the halls of the Congress.

Hours of video footage from security cameras, police bodycams was shown of the day when the Congress was to certify Joe Biden's election victory.

Pence, who was in the Capitol to preside over the certification of Biden's win, was also seen in the video being hurried down to safety by the security personnel, along with his family.

Chants of "hang Mike Pence" can also be heard in the footage.

Republican Senator Mitt Romney, who has often opposed Trump, is being taken by an officer to safety moments before an angry group of rioters entered.

In another segment, rioters were seen vandalising the office of Pelosi and shouting, "Nancy, where are you Nancy?".

"We know from the rioters themselves that if they had found Speaker Pelosi, they would have killed her," impeachment manager Stacey Plaskett, a House delegate from the US Virgin Islands said.

"The vice president, the speaker of the house -- the first and second in line to the presidency -- were... put in danger because president Trump put his own desires, his own need for power, over his duty to the constitution and our democratic process," he added.

Lead impeachment manager Jamie Raskin said Trump "surrendered" his role as the commander-in-chief and became the "inciter-in-chief of a dangerous insurrection".