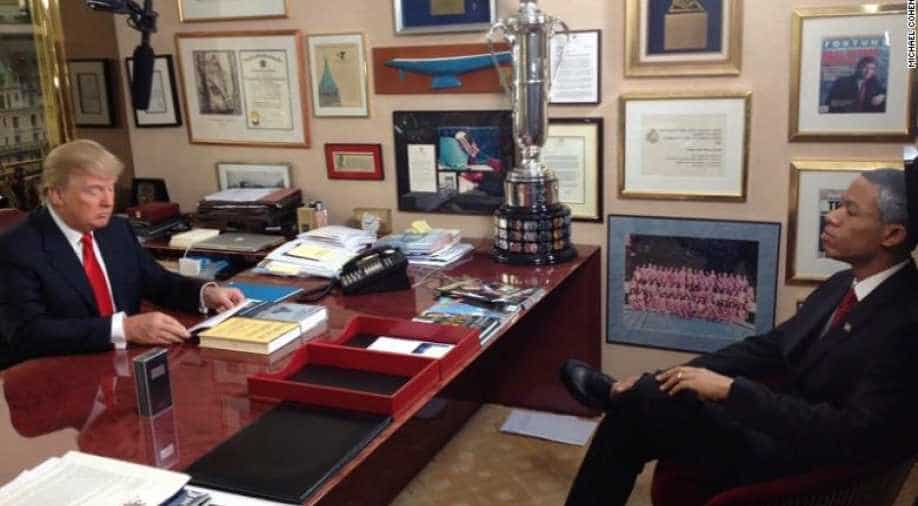 According to a new book by Trump's former attorney, Michael Cohen, Trump's disdain for Obama was so extreme that he hired a "Faux-Bama" to participate in a video in which Trump "ritualistically belittled the first black president and then fired him."

The incumbent president of the United States, Donald Trump, has not been particularly fond of his predecessor Barack Obama. Not only has he often questioned his birthplace, but has also described him as "a Manchurian candidate" who obtained his Ivy League degrees only by way of affirmative action.

According to a new book by Trump's former attorney, Michael Cohen, Trump's disdain for Obama was so extreme that he hired a "Faux-Bama" to participate in a video in which Trump "ritualistically belittled the first black president and then fired him."

Cohen's book, "Disloyal: A Memoir," doesn't name the man who was allegedly hired to play Obama or provide a specific date for the incident, but it does include a photograph of Trump sitting behind a desk, facing a Black man wearing a suit with an American flag pin affixed to the lapel. On Trump's desk are two books, one displaying Obama's name in large letters.

Cohen characterises Trump bluntly as racist, and says that while he never heard him use the "N-word," he used other offensive language.

According to CNN, in the book, Cohen describes Trump as "a cheat, a liar, a fraud, a bully, a racist, a predator, a con man" and a person interested in using the presidency exclusively for his personal financial benefit.

According to federal prosecutors and Cohen's own guilty pleas, he, too, is a liar and a cheat. In 2018, he pleaded guilty to nine counts of federal crimes, including tax evasion, lying to Congress and campaign-finance violations he and prosecutors have said were done at Trump's direction to help him win the 2016 presidential election.

To this end, in a statement to the Washington Post, White House press secretary Kayleigh McEnany said, "Michael Cohen is a disgraced felon and disbarred lawyer, who lied to Congress. He has lost all credibility, and it's unsurprising to see his latest attempt to profit off of lies."

Cohen acknowledges and apologises for his role in Trump's rise, saying he was "more than willing to lie, cheat, and bully" to help his long-time boss win the White House. And he recounts the pressure and guilt he experienced as he spoke out against Trump, writing that he considered suicide "as a way to escape the unrelenting insanity" in the weeks prior to testifying to Congress in 2019.

He writes, "I became even more convinced that Trump will never leave office peacefully."

Trump's model of a man in power, according to Cohen, is Vladimir Putin, and Trump is described as enamored of Putin's wealth and unilateral influence, and awestruck by what he sees as the Russian president's ability to control everything from the country's press to its financial institutions.

But he reiterates his belief that Trump and his campaign officials were too disorganised to have coordinated with the Russians during the 2016 election.

Ranting about Obama after he won office in 2008, Trump had once said, "Tell me one country run by a black person that isn't a sh*thole...They are all complete f*cking toilets," according to Cohen.

After Nelson Mandela died, Trump allegedly said of South Africa that "Mandela f*cked the whole country up. Now it's a sh*thole. F*ck Mandela. He was no leader."

Also read | 'He was no leader': Trump's ex-lawyer says US president disparaged Mandela

Cohen also divulges personal details about Trump, including his hair routine, described as a "three-step" combover designed to disguise "unsightly scars on his scalp from a failed hair-implant operation in the 1980s."