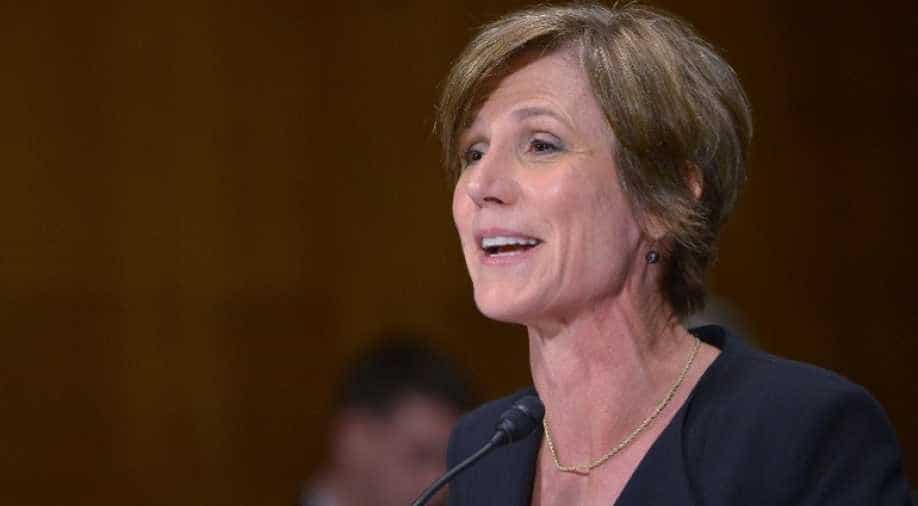 The White House dismissed her comments as rhetoric and said Trump acted within his presidential powers. Photograph:( AFP )

US President Donald Trump on Monday fired acting attorney general Sally Yates after she defied him by saying the Justice Department would not defend his new travel restrictions targeting seven Muslim-majority nations.

The White House said on Twitter that Dana Boente, US attorney for the Eastern District of Virginia, would replace Yates, an appointee of former Democratic President Barack Obama, as acting US attorney general.

"The acting attorney general, Sally Yates, has betrayed the Department of Justice by refusing to enforce a legal order designed to protect the citizens of the United States," the White House said in a statement.

"President Trump relieved Ms Yates of her duties and subsequently named Dana Boente, US attorney for the Eastern District of Virginia, to serve as acting attorney general until Senator Jeff Sessions is finally confirmed by the Senate."

Statement on the Appointment of Dana Boente as Acting Attorney General: https://t.co/fkAWOmnrsP

Yates said on Monday the Justice Department would not defend Trump's immigration ban targeting seven Muslim-majority nations because she was not convinced they were lawful.

She said she did not believe defending the order would be "consistent with this institution's solemn obligation to always seek justice and stand for what is right".

Trump has argued tougher vetting of immigrants is needed to protect America from terror attacks but critics complain that his order unfairly singles out Muslims and defiles America's historic reputation as a welcoming place for immigrants.

Yates was days away from being replaced by Trump's pick for the top spot at the Justice Department, Republican Senator Jeff Sessions, who is awaiting Senate confirmation.

The White House dismissed her comments as rhetoric and said Trump acted within his presidential powers.

"I think that's a further demonstration of how politicized our legal system has become," said Stephen Miller, a policy adviser to Trump, in an interview on MSNBC.