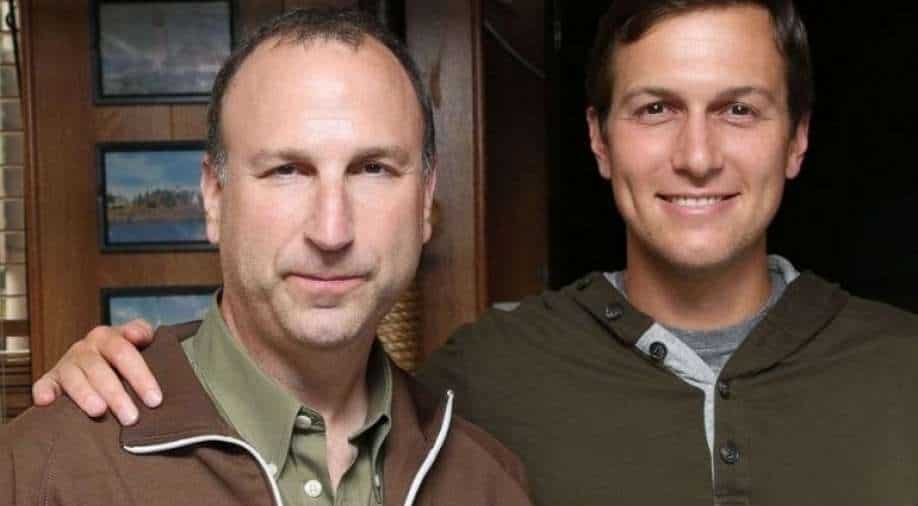 Federal prosecutors charged Kurson with cyberstalking three people and harassing two others, including a friend whom he blamed for the deterioration of his marriage

Two years ago, the Trump administration offered a seat on the board of the National Endowment for the Humanities to Ken Kurson, a close friend of the president’s son-in-law Jared Kushner.

As part of the routine background check for the position, the FBI uncovered a swirl of harassment allegations against Kurson over his divorce in 2015. He then withdrew from consideration, but the fallout from the nomination did not end there.

On Friday, federal prosecutors charged Kurson with cyberstalking three people and harassing two others, including a friend whom he blamed for the deterioration of his marriage.

Kurson’s stature within the Trump family’s circle had been growing before his nomination to the prestigious board. In 2013, when Kushner owned The New York Observer, the weekly newspaper, he appointed Kurson to be its editor-in-chief. While serving as editor, Kurson helped write a speech for President Donald Trump’s 2016 campaign.

Kurson was also a longtime associate of Rudy Giuliani, Trump’s personal lawyer, and helped manage his short-lived 2008 presidential campaign. He now runs a media company and works in the cryptocurrency industry.

In a statement Friday, Marc Mukasey, Kurson’s lawyer, called Kurson “an honorable man, a loving dad and a gifted writer.”

Also read| US election 2020: 19-year-old charged for plotting the assassination of Joe Biden

“The conduct alleged is hardly worthy of a federal criminal prosecution,” Mukasey said. “Ken will get past it.”

Kurson’s accusers described his conduct as “diabolical” and “superscary,” according to the criminal complaint.

The friend whom he blamed for his divorce works as a doctor at Mount Sinai Hospital in New York City, according to people familiar with the investigation, and had been friends with Kurson for more than 20 years.

He targeted her with a flood of negative Yelp reviews, threatening emails, anonymous calls to her phone and messages to Mount Sinai employees claiming she was having an affair with her boss, prosecutors said. To cover his tracks, he used aliases like “Jayden Wagner” and “Eddie Train.”

The doctor told Mount Sinai that Kurson had used similar tactics against another woman who was later fired from her job as a result, the criminal complaint said. The woman filed a restraining order against Kurson.

The woman is Kurson’s ex-wife, according to people familiar with the investigation, though she is not identified by name in the complaint. The people spoke on the condition of anonymity because they were not authorized to discuss an ongoing investigation.

The case is being handled by the public corruption unit of the U.S. attorney’s office in Brooklyn. In a court appearance Friday conducted by phone, a judge released Kurson from custody pending trial. He did not have to enter a plea.

The criminal complaint lists five unnamed individuals as victims of Kurson’s harassment. They include Kurson’s ex-wife, the Mount Sinai doctor, her boss and her boss’s wife at the time, people familiar with the investigation said. The fifth person could not be determined.

The FBI has gathered evidence that Kurson also installed software on someone’s computer to monitor keystrokes, the complaint said. He used aliases to contact that person’s employer to report false allegations of misconduct, according to the complaint.

The criminal investigation began after Kurson was nominated for a seat in 2018 on the humanities board, a federal body that distributes grants to museums, libraries and other cultural institutions.

After the background check turned up the allegations, Kurson withdrew from consideration for the post, The New York Times reported in 2018.

Kurson had resigned as editor of The Observer the previous year. During his four-year tenure there, the newspaper endorsed Trump for president as Kurson advised his campaign. While editing the newspaper, Kurson sat in the Trump family box at the Republican National Convention.

Also read| US Election 2020: Trump, Biden press on in the final leg of campaigning

Kurson had a deal to write a book for HarperCollins, shadowing Kushner for an insider’s account of life in the White House. The deal was terminated after the harassment allegations surfaced in 2018, according to a person familiar with the matter.

In 2018, Kurson created a website called Modern Consensus, which focuses on cryptocurrency and blockchain news. After leaving The Observer, he also joined the board of directors of Ripple, a cryptocurrency company.

A representative for Ripple did not respond to a request for comment.

The complaint said that Kurson’s harassment campaign appeared to begin in 2015, when he emailed the Mount Sinai doctor and accused her of pushing to split up his family.

She replied, “Unfortunately, you have no one to blame but yourself. It is a bitter pill to swallow, but true.”

Kurson then targeted the doctor’s supervisor, the complaint said. Using the alias “Eddie Train,” Kurson emailed the supervisor’s wife claiming to be an employee at Mount Sinai. The email said that her husband was having an affair with the female doctor.

Kurson visited the hospital once in late 2015 and asked for the doctor, the complaint said. He left after he was told she was not available. He also attached photos he took in the lobby in negative Yelp reviews about the doctor that were posted under an alias, prosecutors said.

After the visit, the hospital hired security personnel to guard the lobby and escort the doctor, the complaint said.

“This is a little scary that he was in the office and we don’t know who this person is,” an unnamed hospital employee wrote to the doctor’s supervisor.

That same month, the doctor received harassing calls to her personal cellphone, prosecutors said. The caller would immediately hang up after she answered. She also received the calls on her apartment telephone, which can only take calls from telephones inside her apartment building.

At the time, she was living in the Trump Park Avenue building on Manhattan’s Upper East Side, according to people familiar with the investigation and public records. She filed a complaint with the police department.

In late 2015, the Mount Sinai doctor informed the hospital that she would be relocating to a new apartment and said her email had been hacked.

“I can’t hide forever,” she told Mount Sinai, according to the complaint. “I honestly have no idea what to do about this. I’ve never experienced or heard of anything so insane.”