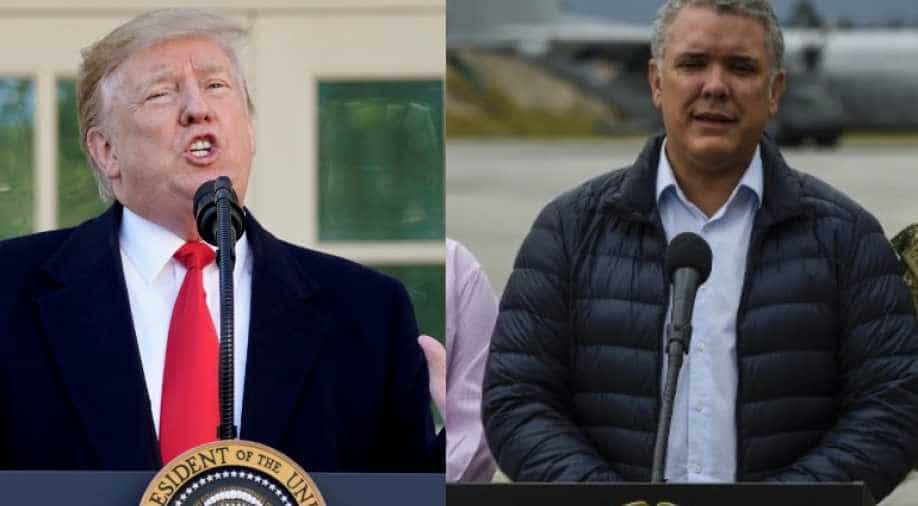 he Trump-Duque talks in the Oval Office will give the allies a chance to compare notes just as the standoff between Maduro and opposition leader Juan Guaido heats up over the arrival of mostly US aid shipments.

The Trump-Duque talks in the Oval Office, followed by lunch, will give the allies a chance to compare notes just as the standoff between Maduro and opposition leader Juan Guaido heats up over the arrival of mostly US aid shipments.

Washington has thrown its full weight behind Guaido, recognizing him as interim president, demanding that Maduro step aside, imposing sanctions, and even threatening the "option" of military intervention.

Colombia plays a crucial role because it has taken in the lion's share of the more than two million Venezuelans fleeing chaos, poverty and political violence under Maduro.

Now, Colombia is the staging post for US and other foreign humanitarian aid that Maduro is refusing to allow in, saying it would be a precursor to US military action.

At a huge opposition rally on Tuesday, Guaido vowed "it's sure that the humanitarian aid will enter" on February 23. "We have almost 300,000 Venezuelans who will die if the aid doesn't enter."

Trump's hawkish national security advisor John Bolton on Wednesday tweeted that "Maduro would rather stand for tyranny than ... accept aid for the Venezuelan people."

Guaido has been recognized as interim president by 50 countries.

But Maduro, whose government has the financial and political backing of China and Russia, has so far resisted the intensifying US pressure, portraying himself in the mold of historic Latin American anti-imperialist leaders.

Moscow weighed in on Tuesday, with Foreign Minster Sergei Lavrov warning "against all interference in Venezuela's domestic affairs, including the use of force threatened by Washington."

Venezuela has the world's biggest oil reserves but its once-thriving economy has fallen into ruin under the long-running leftist government.

Venezuelans face shortages of even basic necessities such as food and medicine and some 2.3 million people have fled since 2015, their salaries and savings rendered worthless by hyperinflation.

Maduro, who gets crucial backing from the country's powerful armed forces, denies there is a humanitarian emergency and has branded the crisis a "political show" and pretext for a US-led invasion.

Now, the focus of the struggle between Maduro and Guaido has turned to the aid shipments. Tons of aid are piling up in Colombian collection centers at the border.

On Tuesday, Guaido insisted that the border be opened.

"Here is a direct order to the armed forces: allow in the humanitarian aid once and for all (and) end the repression," he said.

Guaido's team has also met with Brazilian officials to set up a second aid storage center. The new right-wing government of President Jair Bolsonaro in Brazil, which took over in January after more than a decade of leftist rule there, has joined the coalition against Maduro.