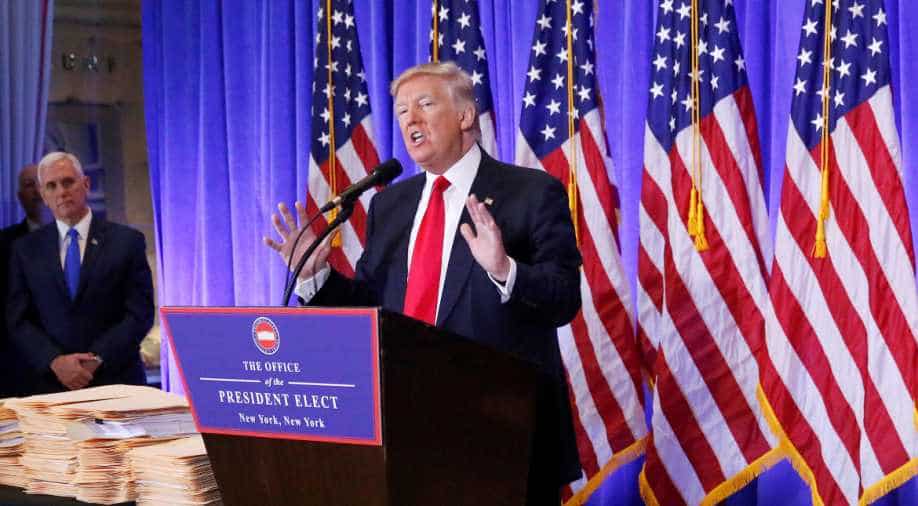 Trump also hit back at CNN for publishing the 35 page report, calling it illegal and fake. Photograph:( Getty )

In his first press conference since winning the November 8 election, US President-elect Donald Trump slammed reports that Russia had compromising information about him, calling it "all fake news" and phony.

Trump addressed the media at the lobby of Trump Tower in midtown Manhattan at 2130 Indian Standard Time (1400 hours GMT) on Wednesday.

"I think it's a disgrace that information would be let out. It's all fake news. It didn't happen. It's phony stuff. It was a group of opponents who got together, sick people, who put that out."

"That's something that Nazi Germany would have done."

Trump was responding to allegations after a 35-page dossier was published in Buzzfeed and reported by CNN. Trump treated the BuzzFeed report and the CNN report as if they were the same, but they are different.

CNN first reported that both President Obama and President-elect Trump were briefed by US intelligence about allegations that Russian operatives claimed to have "compromising" personal and financial information on Trump. CNN didn't disclose anything about the nature of the personal information. They have responded to Trump, and stand behind their story.

BuzzFeed published the 35-page document itself, which contains unsubstantiated claims from a former British intelligence officer who US intelligence claims to find sufficiently credible to warrant further investigation into him.

"I think it's pretty sad when intelligence reports are leaked out to the press. First of all, it's illegal," Trump said.

While he praised some news organisations for not publishing the unsubstantiated report, like The New York Times, but refused to take questions from CNN which had published it.

"I'm not going to give you a question. You are fake news," he told the CNN reporter. "Some of the media outlets we are dealing with are fake news ... All I can ask for are honest reporters."

Trump also asserted that he had "no dealings in Russia" after he was asked if he accepted that Russian President Vladimir Putin had a hand in his victory. He responded by saying "If Putin likes Donald Trump, I consider that an asset, not a liability."

He also accepted that Russia could be behind the hacking saying, "As far as hacking, I think it's Russia. But we also get hacked by other countries and other people and I can say that."

Trump does not divest, cedes business to sons

Trump said he will cede control of business empire to his two sons, Don Jr and Eric while maintaing ownership of the company. He said he will resign from all positions and shift his assets into a trust to avoid conflict of interest. "They are not going to discuss [the business] with me," said Donald Trump.

Ethics experts believe Trump must sell all his assets and place proceeds into a blind trust, saying that this is the only way to ensure that he is free of any conflicts between his international business empire and the office of the presidency, The Hill reports.

Last November, the Trump transition team asked about the possibility of getting top secret security clearance for Donald Trump's children, CNN reported. A Trump spokesman said the President-elect did not make this request, and that no paperwork was filed about it.

Trump said he will appoint a Supreme Court justice within two weeks of 20th January to replace Justice Scalia.

"So, as you know, I have a list of 20. I've gone through them. We've met with numerous candidates. They were outstanding in every case ... I'll be making the decision on who we will put up for justice of the United States Supreme Court, a replacement for the great, great Justice (Antonin) Scalia. That will be probably within two weeks of the 20th (of January). So within about two weeks, probably the second week.

"It will be a decision which I very strongly believe in. I think it's one of the reasons I got elected. I think the people of this country did not want to see what was happening with the Supreme Court. So, I think it was a very, very big decision as to why I was elected."

The President-elect also discussed building the wall between US and Mexico saying he will not wait for negotiations to get over before starting the constructions. Adding that Mexico will reimburse US for the cost of the wall.

He also spoke about the pharmaceutica sector saying "We have to get our drug industry coming back," he said, adding it had been "disastrous and leaving left and right."

He also called for new bidding policy for US pharmaceutical firms saying "They're getting away with murder (with drug prices) ... There's very little bidding for drugs. We're the largest buyer of drugs in the world and yet we don't bid properly. We're going to start bidding and we're going to start saving billions of dollars."

He also announced that Dr. David Shulkin was appointed as secretary of Veteran Affairs.

"We're going to straighten out the VA for our veterans. I have been promising that for a long time ... We interviewed at least 100 people (for VA head), some good, some not so good ... Our veterans have been treated very unfairly."

He also declared that he will be the "greatest jobs producer that God ever created," and that he will not make his tax returns public "as they're under audit".