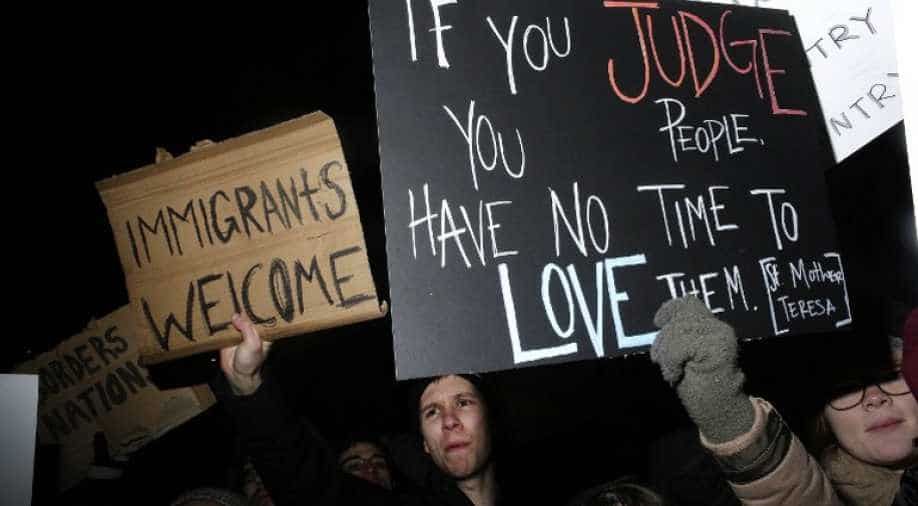 Here are some of the cases known about so far, of people stopped either before boarding flights to the United States or on arrival there.

Two travel agencies told AFP they had been instructed by Etihad Airways, Emirates and Turkish Airlines not to sell US tickets or allow Iranians holding American visas to board US-bound flights.

An Iranian woman blocked from boarding at Tehran airport on Sunday said she had waited 14 years for her green card, which was recently approved only for her hopes to be dashed.

"Even during the hostage crisis at the US embassy (in 1980), the US government didn't issue such an order. They say the US is the cradle of liberty. I don't see freedom in that country," she said, asking not to be named.

"I have sold everything, my house, my furniture. I am totally ruined."

Hamaseh Tayari, an Iranian postgraduate veterinary student, was due to fly back to university in Glasgow, Scotland from a holiday in Costa Rica, via a connecting flight in New York.

But she was refused boarding. "It's a crazy thing that I really didn't expect to happen to me," she told the BBC in an interview.

An Iraqi family was barred from flying from Cairo to New York on Saturday. Egyptian officials said the family had visas and were in transit when they were prevented from boarding the EgyptAir plane to New York's JFK airport.

Fuad Sharef, 51, his wife and three children were instead forced to board a flight back to Arbil in Iraq's autonomous region of Kurdistan, he told AFP.

"I had sold my house, my car, my furniture. I resigned from work and so did my wife. I took my children out of school," said Sharef of the family's preparations to resettle in Nashville, Tennessee, under a special immigrant visa.

"Donald Trump destroyed my life. My family's life. I used to think America was a state of institutions but it's as though it's a dictatorship," he said.

At least three Iranian nationals were stopped at Vienna airport on Saturday as they sought to travel to the US, a spokesman for Austrian Airlines said.

The trio, an elderly couple and a young woman who all came from the central city of Isfahan, had valid US visas, Peter Thier told the Austria Press Agency.

The couple remained stranded in the Austrian capital for the night while the woman had flown back to Iran, he added.

Vienna is an important transit hub for Iranians travelling to the US so there could be more cases.

The American Civil Liberties Union and other advocacy groups filed a legal challenge to Trump's order. Lawyers representing the pair also filed a court appeal for their release, saying they were being unlawfully detained.

Shortly after midday Saturday one of them was released, the newspaper said, naming him as Hameed Khalid Darweesh, an interpreter who worked on behalf of the US government in Iraq.

The paper said he cried as he spoke to reporters, miming being handcuffed behind his back. "What I do for this country? They put the cuffs on," it quoted him as saying.

The other Iraqi remained in custody.

Dutch flag carrier KLM said it had stopped seven passengers from boarding its flights, five of whom it had been able to contact before departure.

The identities of the seven, their countries of origin and destinations were not given.

"We would have liked to have had them fly with us, but it would not have made much sense because they would have been denied entry" to the United States, KLM spokesman Manel Vrijenhoek told AFP.

Air France said Sunday it had refused to embark around 15 people who were nationals of the seven predominantly Muslim countries affected by Trump's decree coming into force.

"Nobody is blocked in Paris and we have made the necessary arrangements to redirect them to their point of origin," a spokesman said.