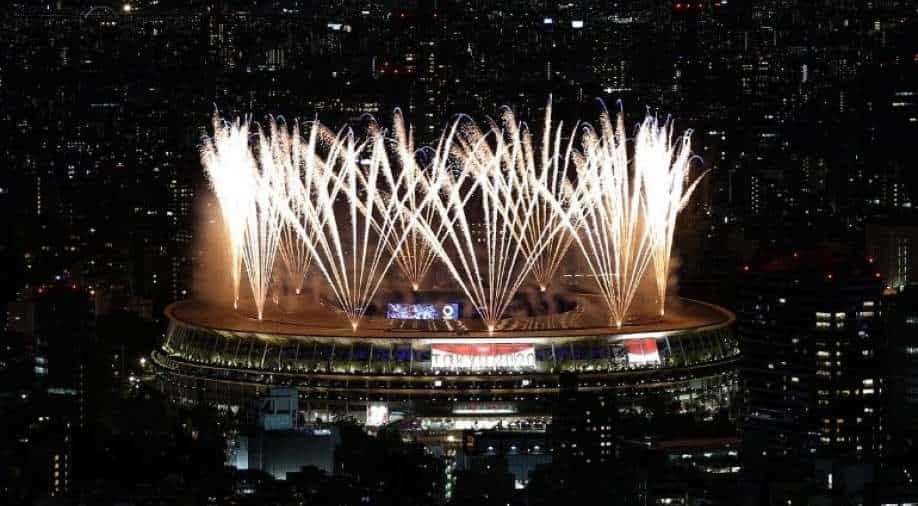 Fireworks during the opening ceremony are seen above the Olympic Stadium from the Shibuya Sky observation deck Photograph:( Reuters )

Tokyo 2020 Olympics Games kicked off on July 23 with a grand opening ceremony which had a limited guest list due to the coronavirus pandemic. While everyone turned to their TV screens to watch the live streaming, a South Korean TV broadcaster ended up showing offensive images and captions while introducing participant countries

A South Korean broadcaster has apologised for using offensive images and captions to represent participant countries in the Tokyo 2020 Olympic Games.

Coronavirus restrictions led to people tuning in to local broadcasters to watch the magnificent opening ceremony. However, a South Korean broadcaster’s coverage of the event sparked anger all over the world.

MBC, one of the largest national television networks, ended up using offensive images to introduce participating countries. The broadcaster used images from the Chernobyl disaster of 1986 to introduce Ukraine, a riot-related image for Haiti, and a promotional bitcoin poster for El Salvador.

Not just the images, the captions included were also highly offensive. The Marshall Islands were described as "a former nuclear test site for the United States" and Haiti was introduced as a nation with an "unstable political situation due to the assassination of its president".

For other countries, the broadcaster decided to use food pictures. For example, Italy was represented by pizza, sushi images were used for Japan, and salmon for Norway.

"Inappropriate images and captions were used to introduce some countries," the broadcaster later issued an apology. "We apologise to those countries including Ukraine and our viewers."